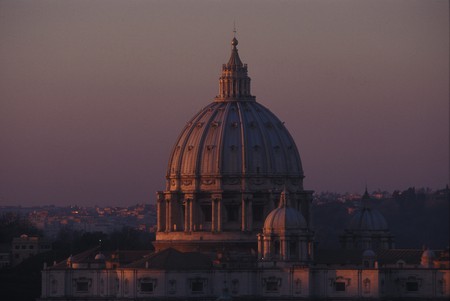 The dome of St. Peter's at dusk | © Matthew Kneale

Few cities still standing today have suffered as much as Rome. Plagues, floods and fires have ravaged the city over its 2,500-year history while its citizens have faced fierce and brutal invasions from Europe’s most treacherous rulers. This is nothing new. Yet in Matthew Kneale’s (English Passengers, When We Were Romans) latest work Rome: A History in Seven Sackings, he argues that the city’s interminable destruction is at the core of its resilience and regeneration, in an original take on this majestic metropolis of ruins.

The problem of crafting a book about Rome’s relationship to war and peace is that it is a deeply saturated literary market. How can you write about Rome and avoid the usual menu of, as Michael Kulikowski puts it, ‘battles, battles, murders, and more battles’? Kulikowski laments this trope in his review of SPQR: A History of Ancient Rome and praises its author Mary Beard for side-stepping it. The other challenge is capturing over 2,500 years of history in less than 350 pages without resorting to a list of major events. Though at times Kneale’s work suffers from these two pitfalls, overall, it is an astute and meticulous account of seven key invasions – their causes, plot-lines and repercussions – that have forged the city that is so widely celebrated today. 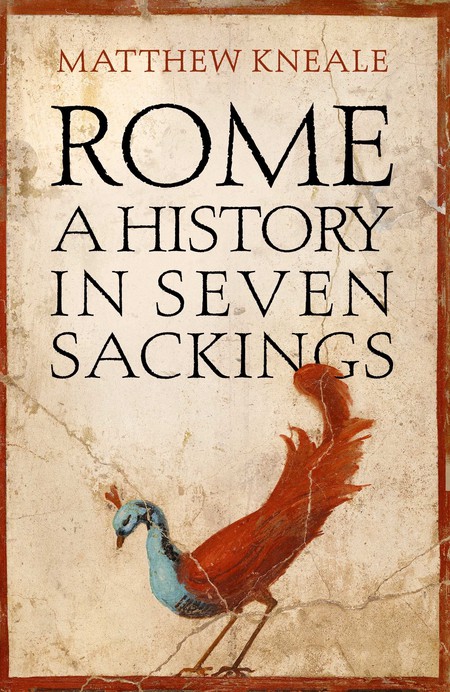 Split into seven chapters covering these seven seminal sackings – Gauls, Goths, More Goths, Normans, Spanish and Lutherans, French, Nazis – Kneale’s book acts as a seven-part trilogy, with each account following a more storied narrative arc than a laconic, historical one. In all seven chapters, rather simplistically but very effectively, there is a clear beginning, middle and end.

Each chapter begins with the enemy approaching; we learn of the long-haired, moustached Gauls wearing ‘nothing but a belt or cloak’ as well as the lice-infected Ostrogoths who swarmed Rome’s walls in March AD 537. Then, doing his best to replicate Google Street View, Kneale drops us in the Rome of the day, capturing the social, economical and political preoccupations of its citizens as well as its sights, sounds and smells.

Though Kneale’s writing is mostly prosaic and unpretentious, Rome’s squalid vitality oozes out of the page with a satisfying clarity. We learn how the popes in the 11th century made money from dead pilgrims, how Ruskin declared it a ‘nasty, rubbishy, dirty hole’ and we feel the fervour of anti-WWII sentiment in a city where citizens had enough trouble ‘paying bills and finding coffee’.

Finally, the gore and destruction of the battlefield is captured as Kneale draws on what documentation there is from historical accounts, masterfully piecing it together by both diluting cinematic embellishments and adding detail by reading between the lines. The result is seven dynamic triptychs that form a coherent, if a little fragmented, tapestry.

Structuring the book around these turning points is not only an original hook into a monumental history, but also a useful way to reflect a key strand in the Roman DNA – namely, resilience. What is perhaps most remarkable about Kneale’s history is the emphasis placed on Rome’s fluctuating growth story, and its constant struggle between destruction and regeneration.

From a town of no more than 25,000 in 380 BC, Rome had grown to the largest metropolis on earth seven centuries later, with 423 neighbourhoods, 856 private baths and allegedly over 46,000 blocks of flats before Alaric’s Goths invaded in AD 408. Though by AD 530, only a century later, the population was back down to the tens of thousands with Rome looking more like a dystopian has-been than the flourishing urban utopia it once was. But as Kneale asserts, both war and peace were equally responsible for the overall development of the city and with every brick that was demolished, the Romans built another, even more beautiful and heartfelt than the last. It is this fighting spirit, this proud resilience, that comes through most prominently in the work, and the idea that Rome’s destruction is not a mere footnote but a substantial pillar of its overall creation. 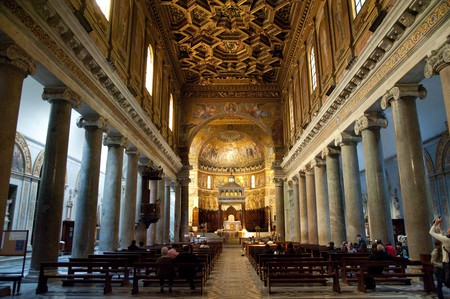 As well as offering a historical account, Rome: A History in Seven Sackings is to some extent useful as piece of travel literature. Kneale is good on the rise of Trastevere, which now forms one of the city’s most touristy neighbourhoods, as well as the series of beautiful churches across Rome, built out of spite and papal rivalries and the changing landscape of Rome’s seven hills. The writer also provides anecdotal accounts of evergreen favourites: the Pantheon, St. Peter’s and the monument to Vittorio Emanuele II, better known by its condescending Roman nickname, ‘The Wedding Cake’.

At the end of Kneale’s afterword, he touchingly jokes: ‘Romans love grumbling and frequently complain that Rome is chaotic, that nothing works, and praise other places… where they are certain everything is far better. Yet scratch a little and you will find that Romans are immensely proud of their city.’

That same hidden pride is equally visible in Paolo Sorrentino’s Oscar-winning film La Grande Bellezza (a different kind of love letter to Rome), where the main character Jep, a thoughtful and dissatisfied novelist-cum-socialite cynically declares: ‘The trains at our parties are the best in Rome. They’re the best because they go nowhere.’ This one line, as superficial as it is profound, echoes what Kneale sees as the essential dualities of Rome. It is magnificent and hideous, rising and falling, changing and staying the same. Most importantly, Rome is resilient. Rome is going nowhere.