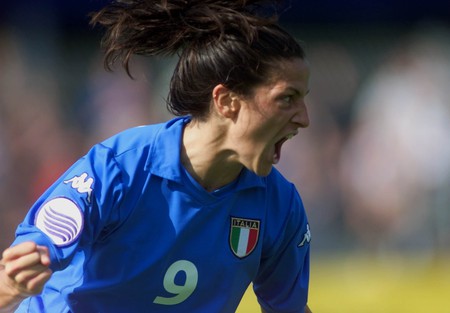 Patrizia Panico is the first female to be head coach of a male national soccer team, with Italy’s all-time leading goal scorer set to be on the bench for Italy’s Under-16 team this week for a pair of friendlies against Germany on March 22 and 24.

Panico, Italy’s most-capped player (204 appearances) and leading scorer (110 goals), is an assistant coach for the U-16 team, but will temporarily be at the helm as head coach Daniele Zoratto helps the U-19 squad in its European Championship elite round fixtures.

“To be the first female on the bench of a men’s national team is certainly a great achievement and I like to think that my first time could also represent the first time for many of my colleagues,” Panico said. “This is just the beginning, not the point of arrival.”

🇮🇹 | Patrizia #Panico will be the first woman to coach a #Italy men's team when she leads the #Under16s vs. Germany.https://t.co/zoSg3lWFg9 pic.twitter.com/hFFa55kXNK

Panico, who was inducted into the Italian Football Hall of Fame in 2015, isn’t the first woman to coach a men’s soccer team, though. Chan Yuen-ting led Eastern to the Hong Kong Premier League title in April, entering the Guiness Book of World Records as the first female to win a top-flight title in men’s professional soccer. Corinne Diacre has been head coach of Claremont Foot in France’s Ligue 2 since June 2014, becoming the first woman to coach a men’s professional soccer team in France. Shelley Kerr made history in August 2014 as Britain’s first senior female soccer manager, coaching Stirling University in Scotland’s Lowland League.

In the United States, there are no female head coaches in the country’s top four professional leagues (MLB, NFL, NBA, NHL), but there are a few including Jen Welter (Arizona Cardinals), Dawn Braid (Arizona Coyotes), Kathryn Smith (Buffalo Bills), Becky Hammon (San Antonio Spurs) and Nancy Lieberman (Sacramento Kings) who have been or are currently assistant coaches.