Curzio Malaparte. Fascist. Communist. Eccentric. A soldier in the First World War, a diplomat, journalist, and liaison officer in the second, he was also a writer, filmmaker and sometime architect. 70 years after Malaparte’s heyday, we reassess one of Italy’s most conflicted men, who cultured polymath who personified the dark underbelly of European avant-garde. 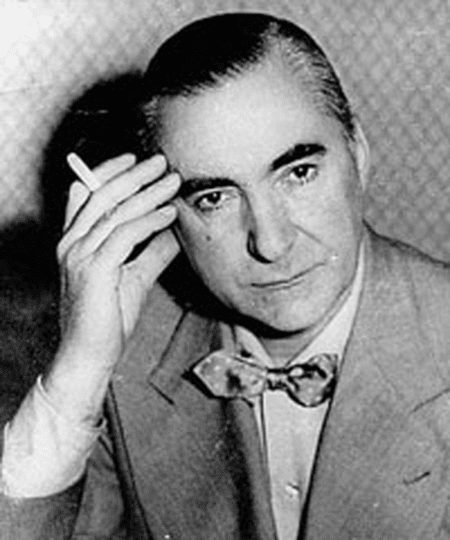 Born in Tuscany as Kurt Erich Suckert, Curzio Malaparte was a man who stepped through the looking glass of death as massacre, of revolution as coup d’état, of omnipresent dictator as flesh and bone. His great works Kaputt (1944) and The Skin (1949) take us on a delirious journey through pogroms, princesses and pubic wigs. Translated into English in their complete form for the first time in 2013, Malaparte’s tales of military madness in Nazi-occupied Europe are perhaps two of the most perversely absurd, beautifully brutal, accounts of war and occupation ever committed to paper. Now nearly 70 years later perhaps it is time to reassess a talented but disillusioned writer who yearned to be Marcel Proust, but found himself inspired by the violent, twisted aestheticism of the darker side of Europe’s avant-garde.

Having fought in World War I, the young Malaparte took up journalism when his decorated service came to end. Critical of the corrupt politicians and ruling classes of Italy, Malaparte, like many in Europe at that time, was attracted by new and radical politics. Enamoured by ideas of power, with an admiration for the purity of violence, as well as a hatred for the bourgeoisie, it was Fascism that Malaparte embraced. In 1922 he took part in Benito Mussolini’s March on Rome, and as a member of the National Fascist Party, he founded and wrote for several periodicals and newspapers. Prolific and outspoken, handsome, intelligent, an elegant dandy of the highest order, Malaparte was perhaps the most vitriolic and brilliant of the ‘fascist pens’. By the time of World War Two however, this once dashing public figure was very much out in the cold.

Some observers portray Malaparte as a calculating opportunist, one moment vocal in his support for the attacks on the intelligentsia of the left, the next insulting Hitler by alluding to his feminine qualities. In fact Malaparte was an impulsive, volatile man who was stripped of his Party membership and banished from Rome. Having supposedly offended Mussolini by questioning his choice of neckties, as well numerous superiors, Malaparte was placed under a loose house arrest. Contradictory as ever he spent much of the following years rubbing shoulders with high society, and while Malaparte did intermittently find himself in prison, he still managed to build a grand, decadent, house, and continue work on surreal, autobiographical novels. Loved as well as loathed, by the time war broke out Mussolini was unsure what do with Malaparte. His indecision would lead to the creation of the two most important literary works of that time. 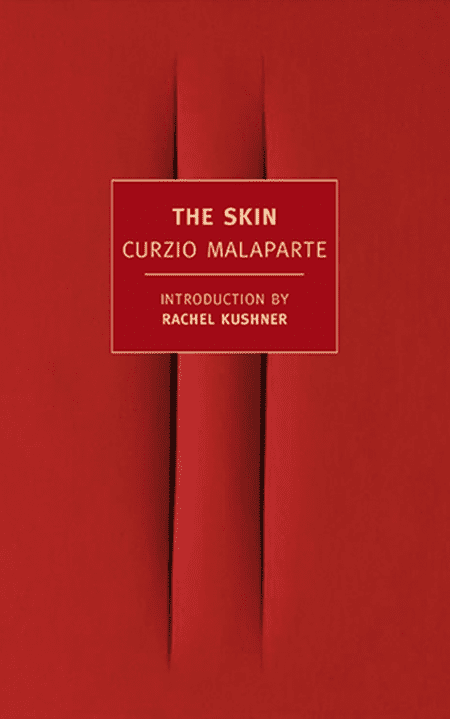 After refusing to go to war with the French, Malaparte was despatched as a war correspondent to the eastern front. Travelling through Europe, writing article after article, the horror that Malaparte encountered formed the basis of Kaputt (1944). A disturbing, despairing piece of magical realism, Kaputt is a gruesome, deliberately unreliable piece of reportage. The first step towards what its author hoped was a new kind of fiction, it is also perhaps one of the greatest indictments of war the 20th century literature produced. Darkly comic and venomous, Kaputt doesn’t spare Hitler, Rommel or even Mussolini. It is the work of a man pouring scorn on the extreme right he fraternized with for so long and now detests. Giving a human face to the ideological fanaticism and racism of the Second World War, its grandiose delivery makes the battles, mass murders, and duels with salmon all the more real and haunting.

Malaparte’s work on the eastern front eventually came to an end when he fell foul of Josef Goebbels propaganda machine. Refusing to read the script Malaparte correctly predicted that the Russian army would not fall, and was ordered back to Italy. Upon his return a humiliated Mussolini had he him arrested. Throughout the rest of the war Malaparte’s official position was somewhat ambiguous. Despite being arrested on several occasions, by the time US forces arrived in Naples at the latter stages of the war Malaparte was free to join them as a liaison officer. It was this experience working alongside the US army through a ravaged, war torn Naples that inspired Malaparte’s greatest work. 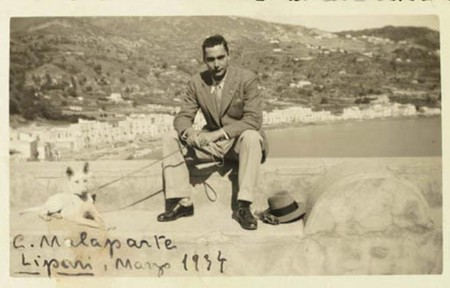 Malaparte in exile in Lipari | WikiCommons

First published in France in 1949 The Skin, Malaparte’s journey through a starving, syphilis infected Naples, was banned by the Catholic Church and the city of Naples itself when it was published in Italy a year later. Derided by critics for bringing misery, shame and depravity into the world of literature, many felt Malaparte stripped the Neapolitan’s of their decency. Almost prophetic in its account of America as a globally dominant power, and years ahead of its time in its opposition to the brutalisation of women during war, The Skin looks into the eyes of occupation and seeks the truth, no matter how ugly or absurd. Drifting along in an almost dreamlike fashion it charts Malaparte’s sometimes fantastical and sometimes shamefully real account of life after liberation. Giving us an insight into the broken, weary, European landscape encountered by the ‘innocent’ US forces, Malaparte deconstructs ideas of evil, freedom, Christianity, and war, in a city that is literally forced to sell its children.

After the controversy of The Skin Malaparte’s eccentric and contradictory mind continued to pursue new ideas and forms of artistic endeavour. Like many of those once in awe of Fascism, Malaparte found solace in the left, turning his attention to Maoism, eventually becoming a member of the Italian Communist Party. He wrote plays based on the lives and ideas of Marcel Proust and Karl Marx. He wrote, directed, and scored award-winning films, and by the time of his death he was planning to cross the United States by bicycle. Controversial to the last some commentators have Malaparte the atheist, being accepted into the Catholic Church on his deathbed, and leaving his estate to the People’s Republic of China.

At best Malaparte can be seen as an eccentric ideologue. Politically lacking in conviction, his beliefs were easily swayed by an obsessive pursuit of artistic expression. For many though Malaparte will always represent the betrayal of the avant-garde writers and artists of the time who, rather than condemn, welcomed totalitarianism. In an unprecedented era of political, economic, and philosophical tension that bore witness to two global conflicts, as well as the rise of Fascism, Communism, and the dawning of the atomic age, the likes of Malaparte remain as symbols of how so many of the intelligentsia embraced the extremity of the times as a route to heightened artistic purity. The man it seems and perhaps deservedly so will probably forever remain the largely anonymous figure he is today in Italian literary history. A bad seed, on the wrong side as his chosen name suggests, his finest work however should not be disregarded, or forgotten. Kaputt and The Skin are beyond politics, beyond genre. They are documents of mans depravity, of man’s madness, and remain a stark warning to the allures of extremist ideology.