Uno Su Nove’s mission is that of promoting emerging and established artists who express themselves through painting, photography and sculpture. The gallery’s large space is divided into three separate rooms, two of which are exhibition spaces, while the third is mainly used for entertainment purposes. By organising exhibitions, debates and screenings, the gallery hopes to become Rome’s go-to place for contemporary art. A recent exhibition, Répétiotion Générale, featured five of the gallery’s most prominent artists. This exhibition will give the public a taste of what the gallery has in store for its 2014/2015 programme. In fact, each of the five artists featured (Raffaella Crispino, Per-Oskar Leu, Sergio Lombardo, Jamie Shovlin and Jonathan VanDyke) will have their own solo show at some stage in the coming year.

Within a few short years after its opening in 1957, Bruno Sargentini’s ‘Attic’ achieved international recognition by showcasing some of the most interesting artists at the time, such as Giuseppe Capogrossi, Leoncillo Leonardi, Lucio Fontana and Mario Mafai. Still now, Fabio Sargentini constantly surprises his audience by creating inventive and original exhibitions. In 1976, for example, he flooded the exhibition space with 50,000 litres of water, creating a whimsical ‘enchanted lake’. The gallerist has also organised experimental theatre exhibitions in at the L’Attico, which is a space that transcends the boundaries of a contemporary gallery, becoming a space where every form of artistic expression can thrive.

Officine Fotografiche is a more than an exhibition space; it’s a non-profit organisation that hosts the entire spectrum of activities related to photography. From traditional-style exhibitions to competitions and classes, Officine Fotografiche is the centre for photographic arts in Rome, situated in a former industrial area that has recently undergone a complete transformation and, thanks to universities, museums, and the gallery, has become a modern factory of culture and leisure.

Dorothy Circus Gallery exhibits the best of surrealist pop art and promotes the newest trends in figurative arts. The gallery describes itself as sitting between New York and Wonderland and it is this whimsical, yet modern approach that has brought the gallery to the list of the 100 best contemporary art galleries according to American magazine Juxtapoz. Alexandra Mazzanti, the gallery director, is an expert of pop surrealism and has been invited to curate exhibitions in some of Italy’s most prominent museums over the last decade. One of the artists exhibited at Dorothy Circus is Naoto Hattori, a Japanese artist who was recently featured in Enfants Terribles, an anthology dedicated to the most popular artists of pop surrealism.

With locations in New York, Beverly Hills, London, Paris, Athens, Geneva and Hong Kong, Gagosian is a worldwide institution for contemporary arts. The Rome gallery is found in the historical centre, and, more specifically, in a 1921 building that used to house a bank. The gallery was designed by Roman architect Firouz Galdo and features a stunning open space exhibition room. With an incredibly impressive roster of artists, Gagosian presents museum-quality exhibitions all year round. A recent one, Scopophilia, was a solo exhibition of the works by American photographer Nan Goldin. Scopophilia featured a massive number of works from the artist’s autobiographical collection, juxtaposed with new photographs of paintings and sculpture from the Louvre’s collection. 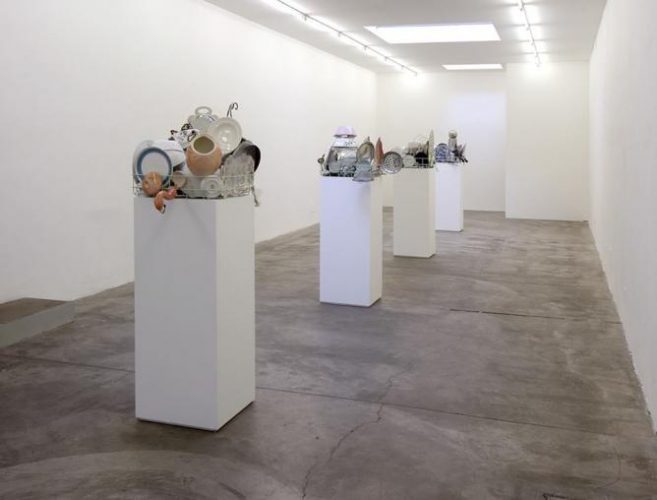 Galleria S.A.L.E.S. first opened in 1994 on a quiet side street of the neighbourhood of Trastevere. Thanks to the brilliant direction of Norberto Ruggeri and Massimo Mininni, the gallery’s co-owners, Galleria S.A.L.E.S. quickly rose to popularity, becoming the ‘it’ place for contemporary arts in Rome. Since then, the gallery has showcased some of the most brilliant contemporary artists, many of which were introduced to the Italian art scene through exhibitions held here. The list of past exhibitions is awe-inspiring and embraces Italian, European and international artists. Since January 2014, Norberto Ruggeri has acquired complete ownership of the gallery and will continue to guide the gallery with his charisma and knowledge. The first big change is a move to a new space in Piazza Dante. What better location for one of Rome’s top galleries than a building that, in the late 19th century, used to host artists during their grand tour? Galleria S.A.L.E.S. is the first stop for art lovers visiting Rome.

Galleria Lorcan O’Neill is one of Rome’s most renowned art galleries. The gallery is directed by Irish art connoisseur Lorcan O’Neill who, through his work, has brought to Rome numerous avant-garde and controversial contemporary artists. In 2013 Lorcan O’Neill inaugurated its third exhibition space in Rome with a solo exhibition of work by Enrico Castellani, Richard Long and Jeff Wall, much of which was site-specific.

Fondazione Pastificio Cerere was born in 2004 as a space where education and art meet. Among the main objectives of this foundation are: the promotion of contemporary arts, achieved by building strong relationships with national and international institutions, as well as playing an active role in the education and support of young artists. A recent exhibition, entitled Hard Copy, focused on the ambiguous nature of digital copies as compared to their originals. The exhibition featured the works of Johann Arens, Daniele Genadry and Jürgen Ots, and was organised together with the British School of Rome and the Academia Belgica. Thanks to its dynamic environment, Pastificio Cerere is currently one of the most interesting exhibition spaces in Rome.

Just like the intense shade of red it takes its name from, Rosso Cinabro represents an extraordinary passion for art. Thanks to the guidance of its director Cristina Madini, over the years Rosso Cinabro has become a flower – albeit still somewhat niche – in the direct vicinity of the beautiful Villa Borghese. The gallery has organised over 100 exhibitions in the past four years, from solo shows of interesting artists from abroad to collective exhibitions of up-and-coming local creatives.