Illustration Is Back in Fashion: Just Look at Gucci x Angelica Hicks 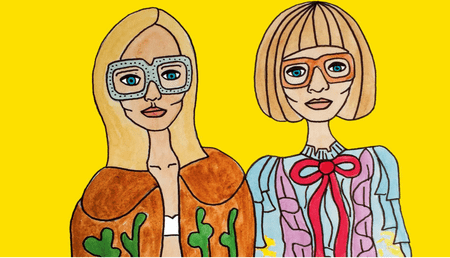 Gucci: the word is probably written about a million times a day, everyone loves this brand; it can genuinely do no wrong. It doesn’t matter whether Alessandro Michele offers glittery gimp masks on the runways of Milan or Petra Collins collaborations in China, everything he touches is inspired, and converts to gold – just look at Kering’s profits last quarter.

So what’s new in the Gucci gallery of ‘things everyone else should have thought of first’? Only a few weeks ago they ran sponsored content with BuzzFeed – can you name another luxury brand clever enough to do that? The answer to the first rhetorical question is: Gucci have partnered with cult illustrator Angelica Hicks to offer a capsule collection of 11 cute t-shirts.

Finally some puffy sleeves that I could get behind

Famed for her witty illustrations, the fact that Hicks cropped up at the Gucci AW17 show earlier in the year was a definite sign that she was on Michele’s radar. Fast-forward a few months and the relationship has gone one step further. Expect to see new takes on the Gucci logo, alongside cute renderings of Gucci-muse Florence Welch.

When you don't understand why everyone complains about clogged paws???

Released on May 25 2017, this new Gucci capsule collection is a light hearted addition to the brand’s rosta of Instagram-friendly pieces. To mark the launch of the collaboration, the illustrator has also taken over shopfronts in Milan and New York, covering the facade of the buildings with large scale murals. For a sneak preview of what to expect, check out Angelica Hicks’ Instagram here, and get ready to find more here later in the month.

I frida nipples in my calvins