If the Cobbles Could Speak: Inside Rome’s Jewish Quarter 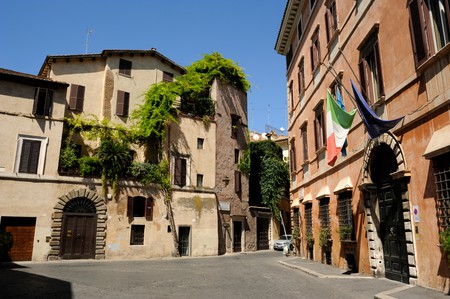 Today, Rome’s Jewish Quarter is a chic, lively neighbourhood, but the streets are more than just a pretty place to explore. Here, two historians and Rome’s chief rabbi explain the complicated legacy of this neighbourhood, and why it should be honoured and remembered today. 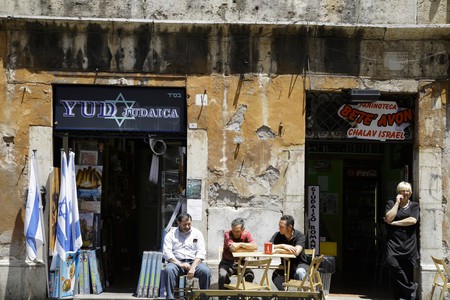 Summer evenings spent in Rome’s Jewish Quarter are like no other; travellers flock here to indulge in the renowned Roman-Jewish cuisine (including the legendary fried artichokes) and dine al fresco beside spectacular Ancient Roman ruins, as the sun sets over the city. But, as Micaela Pavoncello, art historian and founder of tour company Jewish Roma, explains, “The Jewish Quarter is more than artichokes. It’s not just chic – it’s historical. If these cobbles could talk… what stories!”

As home to the oldest Jewish community in the Western diaspora, the quarter’s streets must have plenty of stories to tell. The people here have experienced nearly a quarter-millennium of state repression, forced ghettoisation and deportation, shouldered with extraordinary creativity and resilience. “Our story in Rome is a story of resistance,” explains Rome’s chief rabbi, Riccardo Di Segni.

Rome’s Jewish community has maintained a continuous presence in the city since 139 BC, when ambassadors from the region of modern Israel came to broker an alliance with the Roman Republic. Whereas other Western Jewish communities were built and destroyed, the one here has always remained in the city, explains Rabbi Di Segni. “It means that we are rooted in this country and this place.” 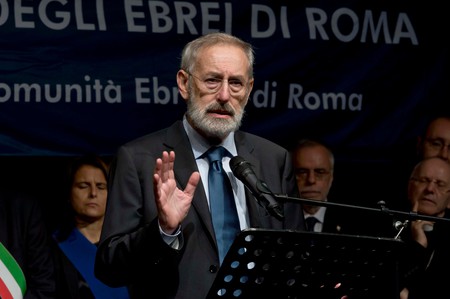 Periods of oppression and tolerance of Rome’s Jewish community fluctuated throughout Antiquity and the early Medieval period, until the late Middle Ages when it flourished. Rabbi Di Segni recounts how, in the 13th century, the community experienced what he calls a “Golden Age”. A visitor to Rome in the 1200s would find, among Rome’s Jewish population, Talmudists (those who are versed in the teachings of the Talmud); poets writing in both Italian and Hebrew, including Immanuel Romano; philosophers; and Kabbalists, such as the famed Rabbi Menahem ben Benjamin Recanati. All this, from a Jewish community around 200 families large who, as Rabbi Di Segni notes, “left a record and a story that is unbelievable.” Perhaps the zenith of all this intellectualism and creativity culminated in 1470 when the world’s first Jewish book was printed in Rome; out of the many cultural contributions that have blossomed from Rome’s Jewish population, the rabbi believes this is among the most significant.

Unfortunately, the Golden Age was not to last. “Christians considered it a mitzvah (religious duty) to convert the Jews,” Pavoncello explains. A terrible consequence was the forced ghettoisation of Rome’s Jewish community in 1555 by the papacy, in the same network of streets that makes up the modern Jewish Quarter. The Talmud was burned, and Rome’s Jewish people were forced to attend Christian mass every Sunday – although legend has it that everyone would block their ears with wax.

In Rome’s Jewish Museum, travellers can see the remarkable creative legacy of this abominable period of Italian history. Roman Jews were forbidden from all professions, bar two: money lending and working with what were deemed “rags”. Ursula Dattilo, senior guide at the Jewish Museum, recounts how this prohibition was a “way of telling Roman Jews, you’re not worth anything, you’re going to take care of the most unimportant things which can be.” In a remarkable example of historical irony, Dattilo explains how the Jewish Museum’s collection is now considered “one of the most beautiful collections of textiles in Europe.” 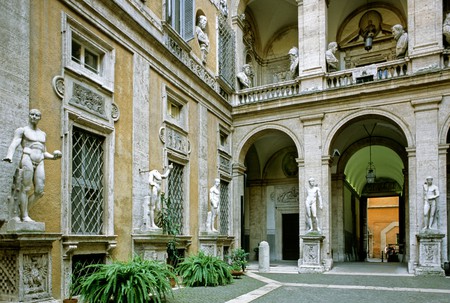 The textiles are a wonder; the majority of those dating from this dark period are beautifully decorated, such as gilded Torah covers made out of second-hand clothes and upholstery. One highlight is a Torah cover made from fabric that previously must have belonged to Queen Christina of Sweden – her crest appears across it. Through embellishment and embroidery, Roman-Jewish artisans made these textiles precious. “Today, all kinds of people come to study these textiles because no one else in the world has a collection like it,” Dattilo explains with pride.

Forced ghettoisation ended 315 years after it was instituted, in 1870, when Rome became part of the newly unified Italy. The city’s Great Synagogue was built in 1904. Rabbi Di Segni explains how the synagogue was intended to be a “symbol of a new age, of freedom and equality… but all hopes were destroyed by the persecution.”

In 1938, Mussolini’s Fascist government enacted racial laws that discriminated against all Italian Jews. Pavoncello explains how, due to the fact that Roman Jews were prohibited from educational access, her older uncles became mechanics. After World War II, her father became a mathematician, and his younger brother, a statistician. “There was no difference in ability,” says Pavoncello – only access to education. 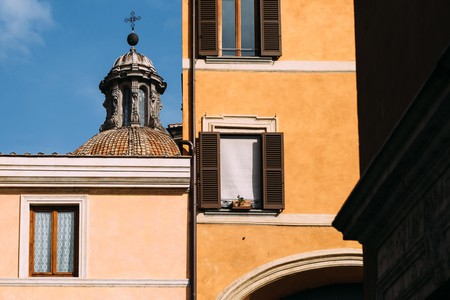 Persecution worsened considerably during the Nazi occupation of Rome. On 16 October 1943, 1,259 people – the vast majority of them Jewish – were awoken, gathered and placed on armoured trains at Roma Tiburtina Station, departing for Auschwitz. In total, over 2,000 Roman Jews were deported for the death camps. Of those who were, only 102 survived. In the Jewish Museum, Dattilo explains how, remarkably, more than 7,000 Roman Jews survived the Holocaust – protected by a public unwilling to relinquish their fellow Populus Romanus (people of Rome).

In contrast with elsewhere in Italy, the Italian police did not typically (although there are exceptions) collaborate with the Nazi occupiers. A Gestapo report, written after the raid of 16 October 1943 and sent to Berlin, complained of the Roman population’s “outright passive-resistance” to the raid, and the attempts to hide Roman Jews in nearby apartments. The Gestapo officer complained that, during the raid, “The anti-Semitic part of the population was nowhere to be seen.” For the rest of the war, innumerable Romans sheltered their Jewish compatriots in their homes, churches and hospitals.

After WWII, the community recovered. Today, there are around 16,000 Jewish people in Rome. Pavoncello explains how, during the 1960s, many people moved from the quarter to the new builds of the periferia (outskirts of the city), founding 11 more synagogues across Rome.

Rabbi Di Segni lives and works in the quarter. Although the Jewish School is his favourite place, he is deeply attached to the entire neighbourhood. “Every stone speaks to me. Every place is significant to me.” He recommends to travellers interested in the history of Rome’s Jewish population to visit the synagogue and museum first, as “the main point” of the area, before heading to the Arch of Titus in the Roman Forum to look at one of the world’s earliest depictions of a menorah. He also recommends the Synagogue of Ostia Antica and the 1st-century catacombs where Roman Jews were buried, which he calls “an incredible monument.” 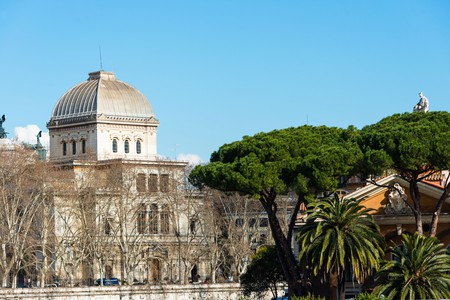 Pavoncello also advises travellers interested in Roman-Jewish history to visit the Jewish Museum, to understand the area’s complicated legacy. However, the place she prefers to spend her time in the quarter isn’t a historical monument at all; she likes to sit on the benches of La Piazza (the square) – as Rome’s Jews still affectionately call the quarter. There, she talks with the Roman-Jewish community’s elderly, swapping recipes and gossip and telling tales from their lives and the life of the quarter. “You won’t find this traditional life as strong in another neighbourhood of Rome today,” she says. “And soon most of that generation will be gone.”

Rome’s Jewish population has long had a positive influence on the city that’s disproportionate to its small size. Travellers benefit from this community’s contributions whenever they see a painting by Michelangelo, who was inspired by the intellectual work of Roman-Jewish poets, or enjoy a supplì, a deep-fried snack developed in a Roman pizzeria during ghettoisation.

The Roman-Jewish commitment to tradition, which survives to this day, is evident to an outside observer of the community. Its presence is felt in Shabbats duly observed, careful kosher preparation of traditional recipes, noise from the playground of the Jewish school, and a crowd leaving the synagogue on Fridays. If the cobbles could talk, they’d tell travellers about the rich cultural life here, which has defied persecution efforts for centuries. As they can’t, Roman-Jewish elders tell the tales for them, keeping their proud, unique cultural identity alive and ever-renewing.