How to Spend Christmas in Sicily, Italy 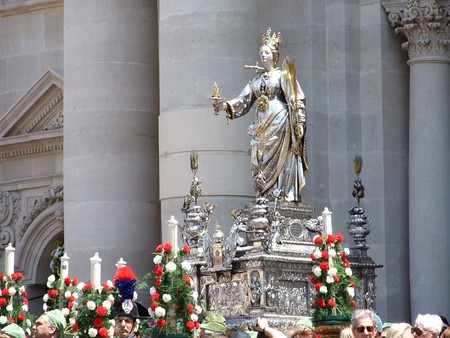 Sicily is a cultural kingdom with deep roots in tradition and festivities. One of the most enchanting and exciting times to be there is during the Christmas season due to the abundance of religious cavalcades, spectacles, and displays. Whether you’re spending your days in the shadow of Etna near Catania, beach side in Taormina, or striding through the streets of Palermo or Syracuse, we will show you the best way to soak up the Christmas spirit while in Sicily.

As opposed to Christmas Day, children normally open their presents during the Epiphany, on January 6th. But despite this, Palermo’s Christmas season is in full swing by early December. The city centre springs to life in a mesh of gleaming lights, elaborate nativity scenes, and vibrant Christmas markets where you can find eclectic hand made Sicilian gifts and toys. Laced into the network of craft booths are incredible food stalls serving up heaps of traditional cuisine and desserts. Located in the Piazza Unita d’Italia you can find intricate antiques and local art, browse the Exhibition of Sicilian Crafts in the lavish Politeama Theatre, and dive into the ‘Fiera di Natale’ – open from mid-November and providing some of the most unique decorations and crafts. 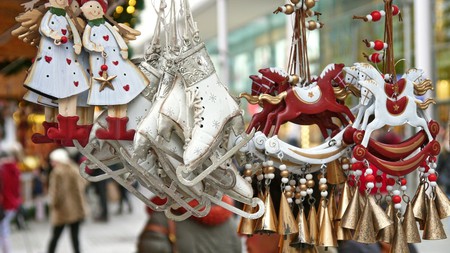 This historic city perched over the sea is notorious for its dazzling and dramatic Christmas processions and festivities throughout the holiday season. Partake in a multitude of activities that perfectly encapsulate the vitality of this special season. Trace your way through history while navigating the medieval streets in the ‘Presepe Vivente’ where the nativity scene comes to life throughout the city, incorporating the entire community. Listen to orchestras and choirs perform magical concerts; watch the Carretti Siciliani – a parade of intricate and colourful carriages documenting Sicily’s rich craft history, or enjoy the symbolic tradition of lighting the Christmas bonfire in front of Duomo di Taormina. While enjoying the breathtaking sea views and Mt. Etna from the city centre and admiring the twinkling lights and decorations interwoven with the ancient buildings, Taormina is the embodiment of Christmas time. 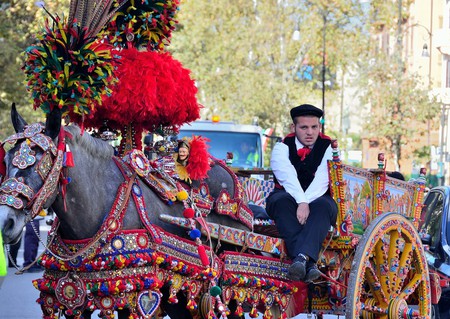 Each region of Sicily has its own traditions and practices, and Catalans are whole heartedly rooted in family ties and Catholic institutions. At Christmas time the city is dressed up in a shimmering dress of decorations; elaborate garnishes are applied to every Baroque and Renaissance styled structure, and a large twinkling tree is installed before the Catania Cathedral. Nativity scenes and meticulously crafted cribs are installed throughout the city with alters for prayer and theatre enactments spilling onto the streets. Catania also has the massive Feast of the Immaculate Virgin Mary which stands as the beginning of the holidays, housed in the historic Sanctuary of San Francesco d’Assisi. You can jump from church to church and admire the unique dedicated chapters, as well as the peaceful and quiet processions that flood the streets during this enchanting time of year. 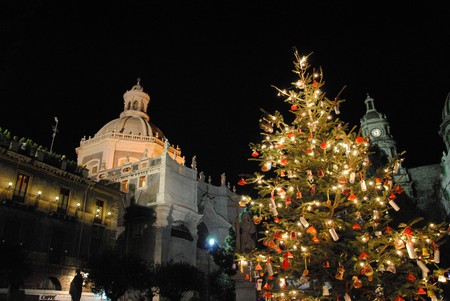 The pearly historic city of Syracuse has a low-key and modern approach to the holiday season. There’s a winding Christmas tree constructed from rotated wooden pallets, and a lack of ornamental Christmas designs in most parts of the city. Although they may be more reserved in their joviality, they still imbibe the splendid ethos of Christmas in Italy with their massive Procession of Santa Lucia, the patron saint of Syracuse, performed on December 13th and 20th. A stampede of worshippers, families, and friends fill the streets, alive with the glow of candles and red plumes of poinsettias. You’ll see shining relics and life-sized statues celebrating their city, including the saint who heralded from there.

Located in the hilly province of Trapani, this ancient and medieval town may seem small in comparison to its surround metropolis’s but packs a huge festivity punch at Christmas time. Boasting beautiful castles and plazas, at Christmas this entire city converts into a festive wonderland. Almost every day of December has some kind of elaborate carnival, concert, or parade. They have a number of brilliant entertainments and merriment, from shows and bagpipe concerts to crafts and gastronomy. You can admire the handmade nativity scenes that occupy spaces all over the city while strolling their cobbled streets and touring the incredible structures and museums. They even supply a map of where most of the nativity scenes or ‘presepes’ are located so as not to miss any. It is truly a magic town for a magical season. 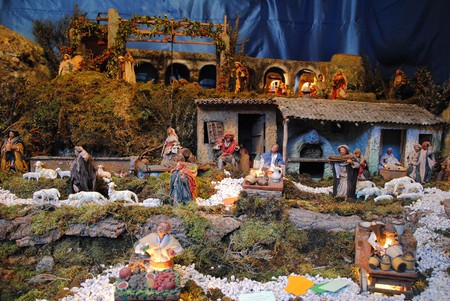