A History Of Trajan's Market In 1 Minute

Trajan’s Market is part of the larger Trajan’s Forum complex, commissioned by Emperor Trajan after a victorious battle against ancient Dacia, now in Romanian territory. It’s considered to be the world’s oldest “shopping mall” and features over a hundred shops and offices on multiple levels, a true feat of Roman engineering. Read on to learn more about Trajan’s altruistic rule and social projects.

Emperor Trajan, who ruled Rome from 98 AD until his death in 117 AD, is considered as one of the city’s greatest emperors. His military campaigns expanded the empire to its largest territorial expansion in history and his rule ushered in an era of peace and prosperity throughout the Mediterranean world. He’s also remembered for being a benevolent leader who implemented many public building programs and social welfare policies. In fact, several buildings and monuments were erected in the center of Rome that now bear his name including Trajan’s Forum, Trajan’s Market and Trajan’s Column.

The Market and the Forum were built around 110AD by Apollodorus of Damascus, Trajan’s trusted architect. While Trajan’s Column is a triumphal structure to commemorate the emperor’s victory against ancient Dacia (now Romania), the Forum and Market were built as part of a large public complex for commercial, social and administrative activities. 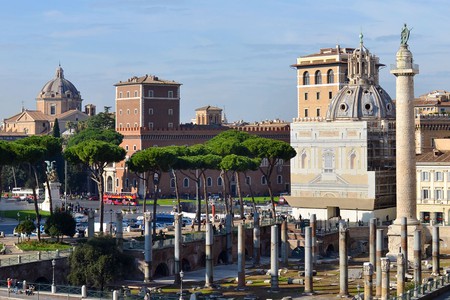 Trajan’s Market is considered to be the world’s oldest shopping mall with shops and apartments built on multiple levels – a truly novel concept at the time. Containing 170 rooms, the shops are believed to have been on the lower level while rooms on the upper level were most likely administrative offices for Emperor Trajan. A few may have been used to distribute free wheat as part of the Roman custom Cura Annonae which dispensed a grain dole to the people. The market hall has gravity-defying vaulted ceilings and remains of a library and marble floors can still be seen today. 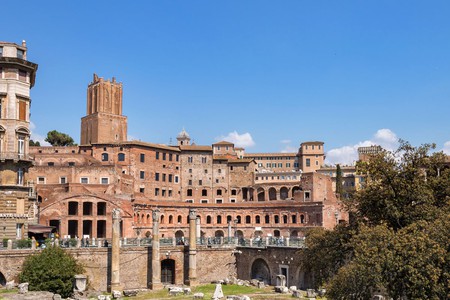 Walking around the area in the 21st century, the Market appears relatively intact while little remains of the Forum save for columns and ruins. Trajan’s Column, however, is in impeccable condition and features a 190 meter wrap-around frieze illustrating Trajan’s battle in Dacia. Behind the Market, you’ll also notice the defensive Torre delle Milizie, erected during the Middle Ages in 1200.