Here's Why Rome is So Attractive to English Poets 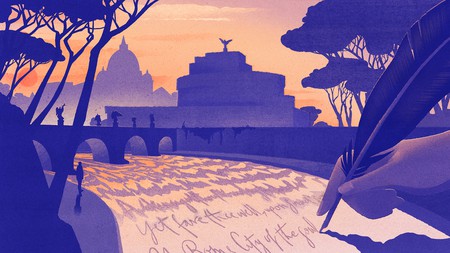 From Keats and Shelley in the 19th century to their dedicated present-day fans who simply wish to follow in the footsteps of the poetry idols, Rome has long been a hub for literary types. Here, we look a bit further into why Italy’s capital city has long captivated some of England’s literary greats.

The magic of Rome has inspired many a writer to put pen to paper, but the city’s connection to the English Romantic poets Lord Byron, John Keats and Percy Bysshe Shelley is perhaps the most celebrated of all. All three poets lived (and in the case of Keats, died) in the Eternal City, and their works continue to attract well-read tourists who are keen on discovering the magic of the city for themselves. So, why is Rome so alluring to poets, writers and literary types?

In the case of Keats, the answer is simple: good weather. The sickly poet came to Rome in 1820, after doctors advised him that the cold London weather could be the death of him. He was suffering from tuberculosis and hoped the warm Mediterranean climate would turn his health around.

Keats’ health deteriorated and he died at his lodgings (now the Keats-Shelley Memorial House) next to the Spanish Steps, aged just 25. Though he died before he could compose any poems about Rome, we do know that he sometimes liked to take walks through the greenery of Villa Borghese and up the Pincian Hill, which overlooks Piazza del Popolo.

He was also a customer of the nearby Antico Caffè Greco, Rome’s oldest coffee shop. Opened in 1760, the café has been frequented by a whole host of historic and literary figures including Mark Twain, Orson Welles and, of course, the Romantic poets Shelley and Byron.

In fact, during the 19th century, the area around the Spanish Steps was so popular with well-heeled travellers it became known as the ‘English ghetto’, with Antico Caffè Greco serving as it’s a meeting point.

While Keats came to Rome for the sun, his contemporaries, Byron and Shelley, came to be inspired by ancient monuments and to soak up the atmosphere of a city 2,000 years in the making—much like the tourists of today do.

Lord Byron spent more time in Venice and Pisa than in Rome, but the Eternal City still captured his imagination. In his four-part narrative poem Childe Harold’s Pilgrimage, Byron described Rome as the ‘city of the soul’ and said of its most iconic monument: ‘While stands the Colosseum, Rome shall stand; When falls the Colosseum, Rome shall fall; and when Rome falls—the world.’

In Byron’s day, travel was only for the wealthy elite so there weren’t hoards of tourists crowding Rome’s monuments like there are today. To recreate the magical atmosphere Byron must have felt upon seeing the Colosseum, try visiting at night when the crowds have died down. To really feel as though you’ve travelled back in time, some companies even offer nighttime guided tours with access to restricted areas.

Shelley too visited the Colosseum during his trips to Rome, but it was the less-frequented Baths of Caracalla that really captivated him. He spent much of his time among the ruins, which were overgrown with plants and flowers at the time, writing Prometheus Unbound, widely considered to be his masterpiece. Fortunately for literary lovers, the Baths of Caracalla are often overlooked by tourists and are the perfect place to soak up the city’s ancient atmosphere in peace.

Though Shelley left Rome after the death of his infant son in 1819, he would later instruct the world with the phrase ‘go thou to Rome’ in his work Adonaïs, an elegy to his friend John Keats.

In a tragic ending (which seems somewhat typical for Romantic poets), Shelley drowned off the coast of Liguria less than a month before his thirtieth birthday. What was left of his body was cremated and his ashes were interred in the Protestant Cemetery in Rome.

With both Keats’ and Shelley’s final resting place being the Protestant Cemetery, Rome has developed another lure for writers and poets. The cemetery, a lush green oasis in the Testaccio neighbourhood, is now a pilgrimage site for fans of the great poets who were inspired by Rome all those years ago.