Herculaneum, Oplontis and Other Ruins to Visit Near Pompeii 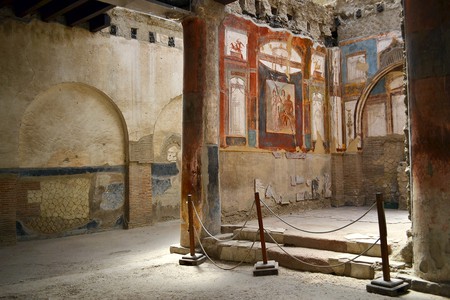 Though the ancient city of Pompeii is world famous and among the most visited sites in Italy, it was not the only city that was ravaged by the eruptions of Mount Vesuvius in 79 AD. Located just nearby are four other excavated cities that are well worth a visit for a glimpse into the life and times of ancient Romans. Read on to learn about the fascinating cities of Herculaneum, Oplontis, Stabiae and Boscoreale. 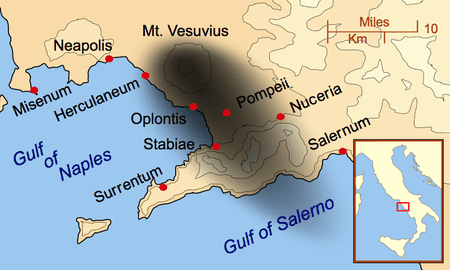 Pompeii attracts 2.5 million tourists each year and is one of the country’s prime attractions. Few people realize, however, that there are a number of additional sites that you can visit on a combination ticket. If you have the time, opt for a 3-day ticket which grants you access to Pompeii, Herculaneum, Oplontis, Stabiae and Boscoreale for €20,00 (€10,00 reduced). Not only will you be rewarded with fewer crowds in the other ancient cities, you’ll appreciate their smaller size and hidden treasures. Pompeii, Herculaneum and Torre Annunziata (ancient Oplontis) are listed as UNESCO World Heritage Sites.

Herculaneum, or Ercolano in Italian, was a wealthier city than Pompeii and remains better preserved because it was destroyed it in a different manner: lying along the coast and to the west of Mount Vesuvius, it was sheltered from the worst of the eruption thanks to winds that appear to have blown ash in a southwards direction, obliterating Pompeii but giving many people in Herculaneum time to flee the city. The ground at Herculaneum was more humid than at Pompeii, meaning that when the city was buried in ash, the sediment created a compact tufa rock layer about 50 feet (15 meters) deep, keeping much of the city intact and free from future looting. Incredibly, wooden homes, clothes and even food were carbonized and preserved to this day, giving an unparalleled glimpse into daily life in the ancient world.

The ancient seaside city of Oplontis, now modern day Torre Annunziata, is best known for the Roman Villa of Poppaea thought to belong to Emperor Nero’s second wife, Poppaea Sabina. The grandiose villa was a residence for receptions and leisure and helped influence the function and design of houses built in Pompeii and Herculaneum: it features columned arcades and two garden courtyards. The Villa was decorated with striking frescoes and intricate trompe-l’œil details such as windows and doors painting onto the walls, also referred to as the ‘second style’ – a style of painting that creates illusions and three dimensional scenes. There is a second villa of interest to visitors, the rustic villa of Lucius Crassius Tertius which was most likely an emporium. There is little evidence of decoration in the villa but many interesting artifacts were found within in, including jewelry, coins, food and dozens of human remains. 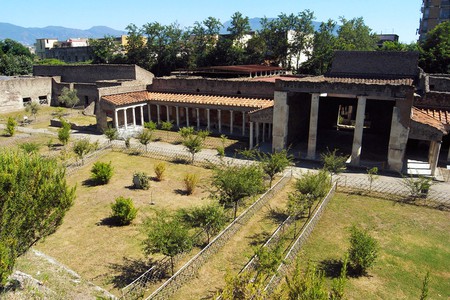 Located further down the coast near the Sorrento peninsula, Stabiae was a small port with numerous luxury villas. A vast wealth of elaborate, well-preserved frescoes and art were found at Stabiae and are today housed in the National Archeological Museum of Naples. The archeological park contain large leisure villas, featuring colonnaded courtyards, atriums, porchs and more, as well as residential villas with agricultural grounds, also referred to as ‘rustic villas’. Stabiae spans 150 acres and much of it remains unexcavated and unexplored: additional treasures are surely hidden just below the surface. 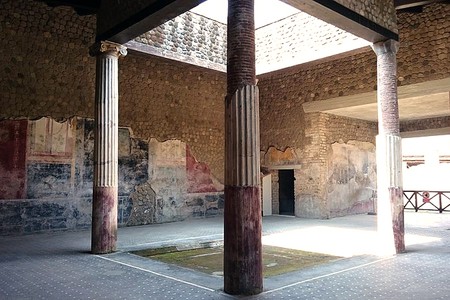 Located in close proximity to both Pompeii and Oplontis, Boscoreale was prized during Roman times for its agriculture, namely wine and olive oil. The excavated Villa Regina is an excellent example of a working farm estate and features remains of vineyards and a wine cellar; vines have since been replanted to give the effect of what the villa would have looked like in ancient times. Numerous other villas were excavated at the end of the 19th century only to be reburied, meaning there is significant archeological work to be done at this site. The archeological site contains a small museum, the National Antiquarium of Boscoreale, that displays archeological finds and relics such as food, fabric and household items. 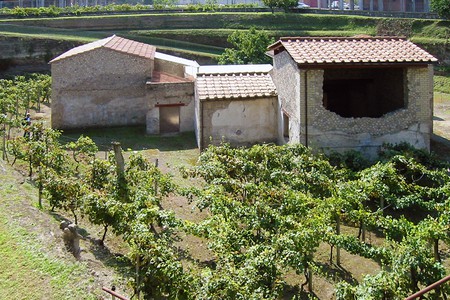 Boscoreale | © AlMare/Wikicommons
Give us feedback