From Religious Celebrations to Quirky Local Festivals: A Guide to Italy’s Regional Customs 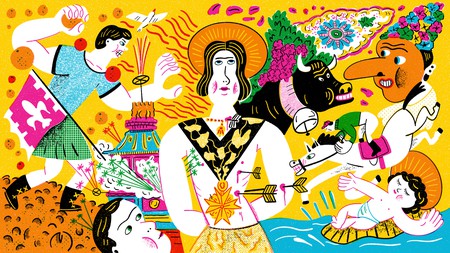 Italy has a diverse cultural heritage, and it’s showcased in the innumerable regional festivities and celebrations that take place across the country. While most are rooted in Christian traditions, many festivals celebrate the arts, gastronomy, wine and even animals.

Until 1861, Italy was a conglomeration of independent states with distinct identities, customs and traditions. “These are very much kept alive today, with historical re-enactments and festivals, including medieval palios and religious ceremonies such as local saints’ feasts,” explains Stefania Gatta, press, communication and marketing executive of the Italian National Tourist Board. “Italians love to actively participate in a wide range of festivities, attending in great numbers to celebrate alongside fellow members of the local community.” Whatever the occasion, even the smallest of towns have reason to break out in boisterous celebrations, often lasting for days; these are some of the best to experience if you’re planning a trip to Italy.

One of Florence’s most vibrant festivities takes place on Easter Day, when four oxen festooned with garlands draw a cart laden with fireworks from Porta al Prato to the Duomo. During mass, a dove-shaped rocket hurtles from the high altar along a cable line to reach the cart, triggering a spectacular explosion of fireworks. This tradition dates back to the First Crusade, at the end of the 11th century, when the head of the Florentine contingent Pazzino de’ Pazzi was given three splinters of stone from the Holy Sepulchre, used to this day to light the Holy Fire on Easter Eve.

Paint the town orange at Ivrea’s Battle of the Oranges

Over the course of three days, over 600 tons of oranges are splattered across the small town of Ivrea in a feisty, citrusy battle. Combat teams pelt one another with fruits otherwise destined for landfill – onlookers are welcome, though you’re advised to don red hats to avoid being struck. “In the 19th century, during carnival young bourgeois women would look down at their male counterparts from their balconies and throw flowers, sugared almonds and confetti in a coquettish display,” explains historian Gabriella Gianotti. “Considered an exotic fruit in this part of Italy, oranges were later introduced, and, over time, this tradition evolved into what it is today.” 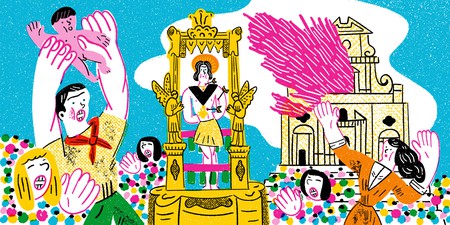 Celebrate the Festa di San Sebastiano with an explosion of colour

The inhabitants of Palazzolo Acreide in Sicily have long venerated Saint Sebastian, who was pierced with arrows and martyred. His life is traditionally commemorated on the island on 20 January, although this Baroque town holds its main celebrations on 10 August, when a statue of the saint emerges from the Church of Saint Sebastian to be paraded through town. The event is marked with a spectacular display, featuring firecrackers shooting into the air and nsareddi – long strips of coloured paper – raining down onto a raucous crowd of believers.

The Palio di Siena may be the most famous palio (traditional horse race) in Italy, but Ferrara’s is the country’s oldest, dating back to 1259. Celebrating the victory of the Lord of Ferrara Azzo d’Este against the vicar of the German emperor, it sees over a thousand participants wearing traditional 15th-century costumes in a historical procession that snakes through the city streets. On the last Sunday in May, eight contrade (districts) compete in four gripping races – a boys’ race, a girls’ race, a donkey race and the famous horse race – in the city’s historical Piazza Ariostea. 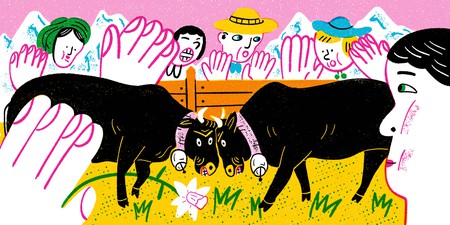 This Alpine cow-fighting tournament sees around 3,000 cows from 500 breeders go head to head, with the winner crowned queen with a stunning cowbell and a garland of flowers. For centuries, the Valdostana breed of cattle has been a cornerstone of the local economy. Instinctive fighters, they are prone to challenging one another to establish a hierarchy in the herd. “The fights pose no harm whatsoever to the cows,” explains the tournament’s president Roberto Bonin. “The event brings the region’s farming communities together, creating strong bonds between children, young and old alike, who share a common interest in livestock farming.”

Over the course of three days in June, the town of Genzano di Roma in Castelli Romani is carpeted in a dozen intricate works of art made from over 350,000 flower petals that have been painstakingly removed from 20 types of flowers. It’s an incredible sight, with elaborate depictions (mostly religious in nature) blanketing Via Italo Belardi, which rises gently towards the Church of Santa Maria della Cima. Dating back over 200 years, the tradition began when the inhabitants of the town prepared flower carpets for the feast of Corpus Domini (a religious festival emphasising the holiness of the Eucharist.) 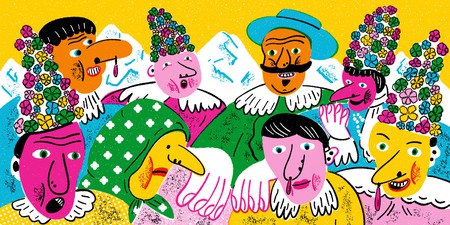 In a relatively remote corner of the Dolomites lives the Ladino community, united by a common language and centuries-old traditions that incorporate both pagan and Christian elements. Lasting about a month, Val di Fassa’s Carnevale Ladino celebrates the end of winter with lively festivities featuring dances, performances and pageants in a number of alpine villages. Participants wear striking pinewood masks and don elaborate traditional dress. Some have long hooked noses and cone-shaped hats, while others wear oversized masks and belts with cowbells, which symbolise the importance of livestock in this part of the country.

Watch baby Jesus emerge from the waters of Lake Cornino

On Christmas Eve, about 30 divers plunge into the chilly waters of Lake Cornino to present an underwater nativity scene complete with diminutive, lifelike figures. “Local carpenters, builders and electricians come together over the course of a month to mount the floating installations made of Plexiglas and illuminated with LED lights,” explains the president of Friulana Subacquei, Antonio Sambuco. The ceremony involves bringing a statue of Jesus – placed on the lake bed on 8 December – to the surface of the water and lifting it into a floating cradle suspended under a brightly lit shooting star.

Every seven years, the small town of Guardia Sanframondi becomes a veritable theatre stage, hosting striking re-enactments of biblical scenes. “The entire town awaits this religious event with much anticipation. It unites the local population, stirring deep emotions and creating a close bond between us all,” explains Morena Di Lonardo, regional assessor for tourism. “The organisers of the event spend years scrupulously selecting those best suited to impersonate each role.” Some 2,500 people take part in the celebrations, which include penitential processions, with some parading barefoot, others walking backwards, others still flagellating themselves as they march through the town’s cobblestone streets.