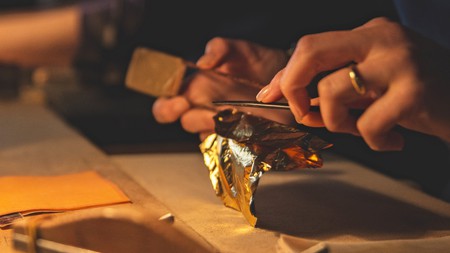 At one time, there were over 300 goldbeaters in Venice. But with no successor to his craft, master craftsman Marino Menegazzo, whose work adorns the city’s most famous monuments, is the last.

The days begin and end with gold in Italy. ‘Il mattino ha l’oro in bocca’ (the morning has gold in its mouth) is how ‘the early bird catches the worm’ is rendered; by night, the words ‘sogni d’oro’ (dreams of gold) is the expression with which sweet dreams are wished for.

In a workshop at the dead end of an alleyway in Venice’s Cannaregio district, gold does more than bookend the days: it infuses them – with purpose, with beauty, with skill and with particles of shimmering dust. It is here, in the building that was once the studio of 16th-century painter Titian, that Marino Menegazzo works, pounding the precious metal into submission by hand. 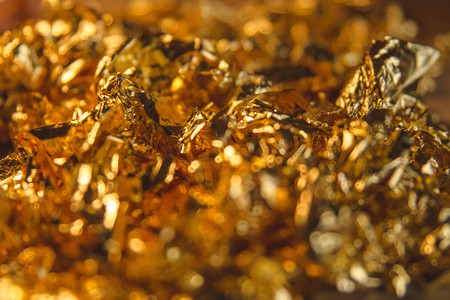 Not all that glitters is gold, but this is | © Andrea Cacopardi

As is often the case with artisans, the name of the family business has become synonymous with the profession: Battiloro, literally, beater of gold. The craft first came to Venice from Byzantium in about AD 1000 and, at one time, the city housed 46 workshops employing around 340 gold beaters devoted to the craft. Today, there is only Marino: now 65 years old, he plans to retire in 2020, but hopes to still be working, at least part-time, when the workshop celebrates its centenary in 2026. When he eventually hangs up his mallets for good, however, it will mark the extinction of the craft in Europe.

It’s an astonishing mantle to wear, especially as Marino was neither born to, nor groomed for, the profession. “I had a boring job when I met my wife, so her father (who had recently revived the family business, Mario Berta Battiloro, which was founded in 1926) invited me to try his craft, and I enjoyed it immediately,” he explains, as casually as someone might describe taking up golf. “Since then, I never stop doing it.”

The process, however, is arduous to a degree that golf, for example, cannot lay claim to. First melted for purification, then stretched into ribbons by a roller, the gold is cut into squares that are flattened by one of the workshop’s only machines. These are then quartered, and thus begins Marino’s work.

Only a marble block will withstand the pressure of Marino’s blows, and it’s on this that the bundle of gold is placed, wrapped in paper. Over the course of about two hours, the packet is beaten around 30,000 times with Marino’s right hand, wielding century-old hammers of varying weights, ranging from three to eight kilograms (about six to 17 pounds). During the process, his left hand rotates and turns the packet, rotates and flips it again. 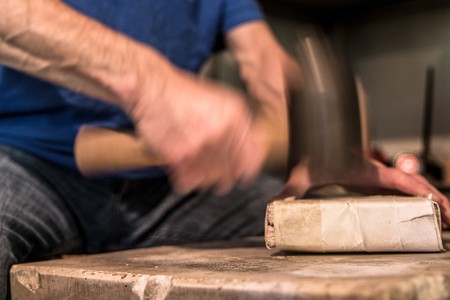 It’s extraordinary to watch him at work. The right arm beats, the left hand flips – yet Marino’s eyes move peacefully around the room, scarcely even glancing at the precious package, on which his left hand, bare and vulnerable, plays; even more incredibly, he has only hit his fingers four times in his career. Despite our conversation, he’s also mentally keeping count of the number of blows he administers – and, far from the brash clanging you might associate with metal work, these blows produce a dull, almost soporific, boom. It’s odd, too, to feel his right bicep: you’d expect a Popeye-style bulge, but Marino’s arm, while strong, is perfectly in proportion. All the power, he tells us, comes from his wrist.

The end result is a gossamer-light sheet of gold, 200 times thinner than human hair. In a room at the front of the workshop, his wife and twin daughters, Eleanora and Sara, work with intense precision, cutting the gold leaf into predetermined shapes and sizes and placing them, with tweezer-like implements, between the pages of libretti (the book in which the gold is stored). The squares appear so insubstantial that one hardly dares breathe while watching them, although the women expend tiny puffs of air to smooth out the wrinkles as the gold connects with the pages. 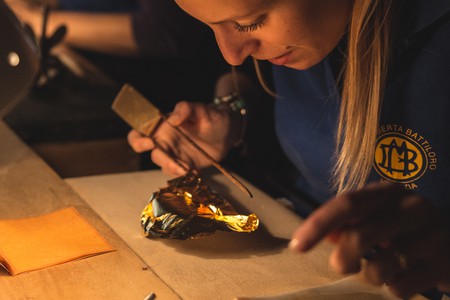 The end result is a gossamer-light sheet of gold, 200 times thinner than human hair | © Andrea Cacopardi

Why can his daughters not take over the business? “We have tried,” admits Eleanora. “I started with the three-kilogram hammer but lasted only a few minutes.” With no son, and his daughters lacking the physical strength required to beat by hand, Marino’s hopes for a successor have been vested in a series of apprentices – none of whom have had the necessary love for the job, nor the requisite stamina. “It is heavy, long and difficult work, requiring coordination, memory and passion,” says Eleonara. The last apprentice, she confides, lasted only three days.

Small wonder that Marino has more or less resigned himself to the extinction of his art. So has UNESCO: they recently visited the studio to discuss recognising the craft within their Intangible Cultural Heritage category but, on learning that no one was following in Marino’s footsteps, they retreated, in search of more viable possibilities.

There’s a melancholy juxtaposition between, on the one hand, the durability of gold and of Marino’s work – work which adorns the Archangel Gabriel on the San Marco campanile, the Vatican and even as far afield as the Kremlin – and on the other, the impermanence of the craft. It’s a dichotomy that Venice – itself sinking, floating and shape-shifting – mirrors: labouring under the twin weights of over-tourism and climate change, it grapples with the fact that the water which makes the city so unique is also contributing to its transience and almost certain eventual demise. 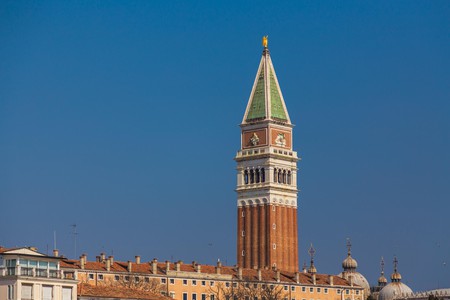 Marino himself has similarly conflicted feelings. “There is a sensation of greatness, because I have a power and a knowledge that no one else has,” he admits. “I feel huge satisfaction whenever I see my work at the top of the Campanile; gold that brightens every day with the touch of the sun – but at the same time, it scares me that no one will love and continue this art.”

For his family, there’s a sense of defiance: perhaps they can’t wield a weighty hammer, but these women are nothing if not resourceful and, as demand for quality hand-beaten gold leaf dwindles, they look to the use of machinery and new applications.

“Gold has benefits for health and beauty,” explains Eleonora, who, like the rest of her family, appears to be lit from within from a lifetime of breathing in gold dust. Collaborating with the Merchant of Venice Spa at the San Clemente Palace Kempinski Hotel, the family have developed a facial involving the application of 11 layers of gold directly to the skin; kits for use at home can be purchased, too. Intricate designs made from pure gold can also be bought for application to the body, like glittering tattoos – but, lasting for up to two weeks, these, too, are only temporary. The rhythmic thud of Marino’s mallets are soothing, but perhaps there is some truth in the words of Robert Frost: nothing gold can stay. 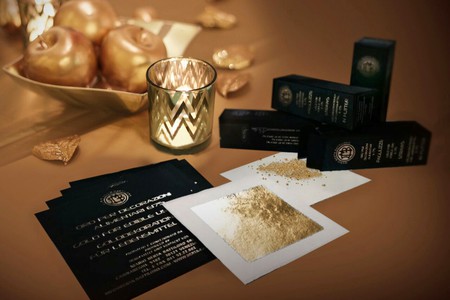