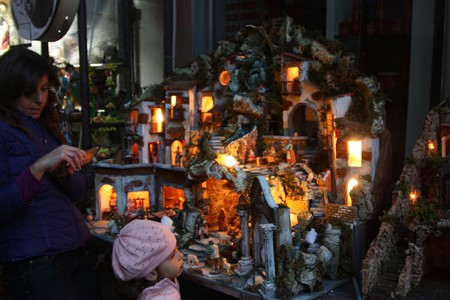 Deep in the heart of Naples at Christmas time, in the shadow of an ancient Greek road, you will find butchers, bakers and gynecologists mingling with the Pope, Donald Trump, the Beatles and baby Jesus. They are approximately six inches tall, hand painted and forever frozen in time. This is the magical miniature world of the nativities in San Gregorio Armeno Street in the historic center of Napoli. 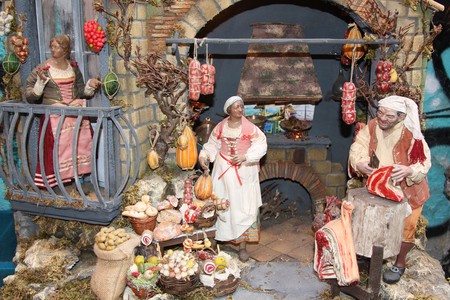 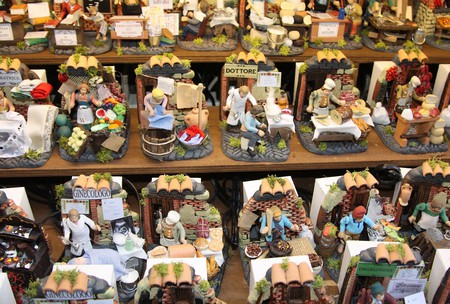 You can find replicas of butchers, bakers, laundresses and gynecologists for purchase on San Gregorio Armeno Street to include in your household nativity scene. | Kristin Melia

These baroque nativities once provided vital outreach to an overwhelmingly illiterate Catholic populace in Naples. Presepaio started adding figurines of notable local celebrities to attract customers. The Capuano family,who has crafted nativities since 1840, secretly included the likeness of local shopkeepers as a private joke. Leading up to WWII, one local artisan included a carved rendering of Benito Mussolini at the sight of Jesus’ birth. 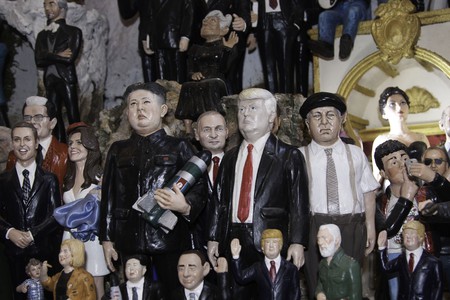 Politicians and royalty line up to visit Jesus | © Kristin Melia

Today artists work overtime to add figurines of pop stars and politicians in keeping with current events. After Donald Trump and Kim Jong Un had their war of words, local presepaio competed to carve a life-like painted set of this odd couple, complete with a jumbo rocket and a windswept hairpiece. You can view Kim Jong Un and Trump along with Lady Gaga and Fidel Castro at the nativity displayed by Ferrigno Marco. 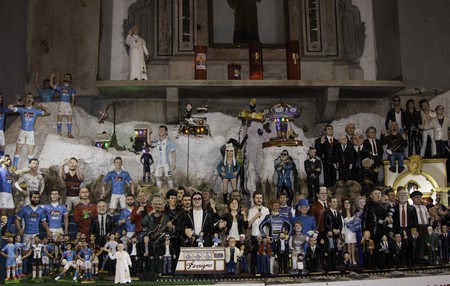 Can you spot Lady Gaga, Donald Trump and Queen Elizabeth in this selection of nativity figures? | © Kristin Melia

Another unlikely nativity artisan is Carmine Mauro, who does not work with wood, ceramic or paint but with the most Neapolitan of building materials—pizza. For twenty years, Carmine has sculpted an intricate nativity out of the same pizza he serves at his pizzeria, 900, in the center of Naples.

Carmine’s career in pizza-sculpting began as a child when helping his grandmother on her fried pizza stand, where he spent slow periods crafting toys out of pizza dough. When his own children were born, he made a simple nativity scene out of pizza—a small manger, a few shepherds and the holy family. 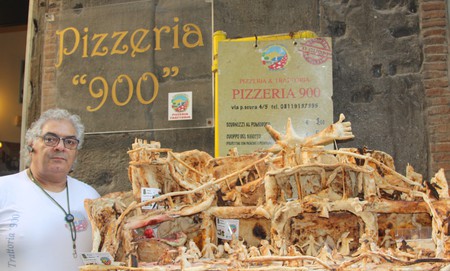 Today the pizza nativity is a miniature village. It includes a fountain that pumps water dyed with pastry cream. There is also a pizza oven next to Jesus’ manger. 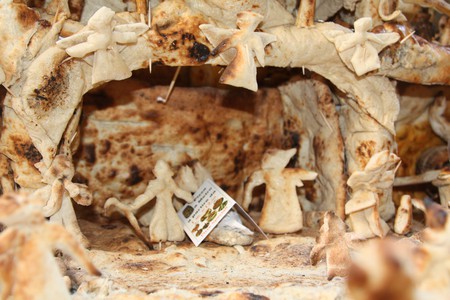 Baby Jesus will join Mary and Joseph in his pizza manger on Christmas day. | Kristin Melia

So if you’re seeking a different kind of nativity for your home this Christmas, visit San Gregorio Armeno Street to explore the traditional Neapolitan nativities, soak up the festive atmosphere, and perhaps stop off for a slice of pizza.