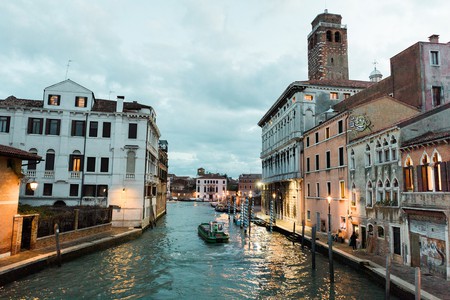 As the sun falls in Venice, go in search of some pre-dinner cicchetti | © Camilla Martini / Culture Trip

Avoid leaving Venice with a bitter taste in your mouth; forget overpriced restaurants, and look for Venice’s real culinary tradition in its local, cheap cicchetti bars.

To experience Venetian cuisine beyond pasta and pizza, head to one of the city’s bacari (traditional bars) in search of snacks known as cicchetti. From behind glass counters, bartenders serve up a dazzling collection of small bites, which range from the classic tramezzino, a little white bread sandwich, to fresh seafood concoctions using ingredients from the Rialto Fish Market. The Roman Guy, whose Italy-wide tours include the Venice Food Tour, leads Culture Trip to the best of these diminutive, hidden bars where Venice’s most authentic food can be found. 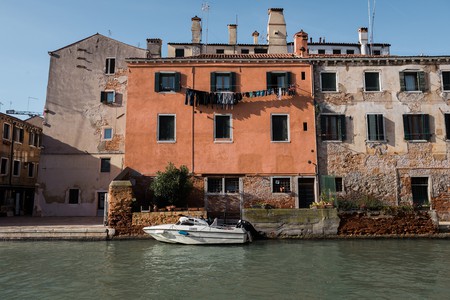 Bar, Bistro, Restaurant, Italian, Vegetarian, Vegan, Wine, Beer, $$$
Facebook
Email
Twitter
Pinterest
Copy link
Share
Map View
Cicchetti are often billed as Venice’s answer to tapas, but Venetians tend to resent that analogy – perhaps because of culinary rivalry, or possibly just because it’s an inaccurate comparison. At Al Timon in the Cannaregio district, one of The Roman Guy’s top recommendations, there is a friendly reminder on the bar not to use the ‘t’ word. Their cicchetti are very much unique creations, lined up in colourful, regimented rows. As the Roman Guy notes, Al Timon “prides itself on choosing the best, freshest ingredients and wines providing a superb culinary experience.” Visitors wishing to linger can sit down for a dinner of fish specialities, which the Roman Guy insists should include the antipasto di pesce for its “exceptionally fresh fish.”
Open In Google Maps
2754 Fondamenta dei Ormesini, Venezia, Veneto, 30121, Italy
+390415246066
Visit Website
Visit Facebook page
Give us feedback 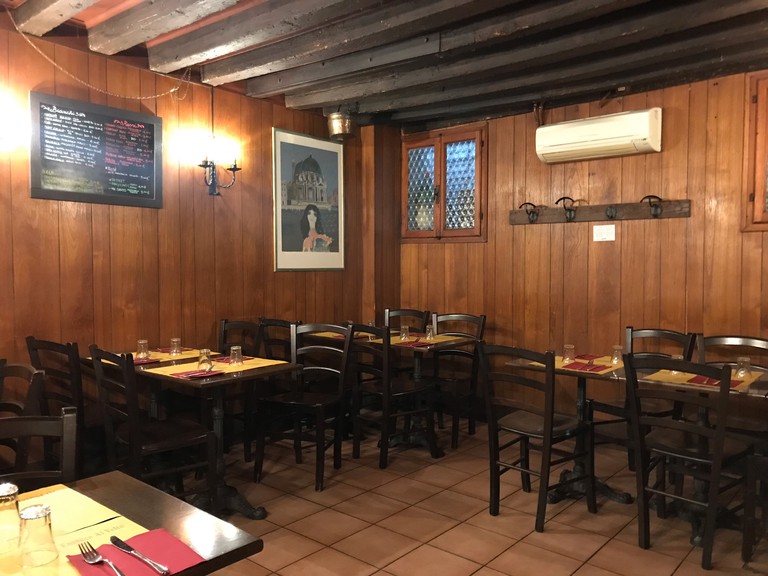 Enoteca Al Volto has over 1000 bottles of wine – if you can't decide, opt for the prosecco | Courtesy of Enoteca Al Volto
Although cicchetti are often advertised by guidebooks as a “cheap way to have an evening meal,” they are actually intended as accompaniments to a pre-dinner drink. Typically, Venetians nibble on cicchetti as they order an ombra (shadow), which is a small glass of wine. Stories behind the name ombra abound, including the legend that it originates from a mobile cart that sold wine in St Mark’s Square, moving throughout the day to keep the wine cool in the shadow of the Campanile. The Roman Guy recommends Osteria Enoteca Al Volto, which specialises in ombra, for their “delicious house prosecco,” best accompanied by their fried calamari or creamed cod, served in true bacaro style.
Open In Google Maps
4081 Calle Cavalli, Venezia, Veneto, 30124, Italy
+390415228945
Visit Website
Visit Facebook page
Give us feedback 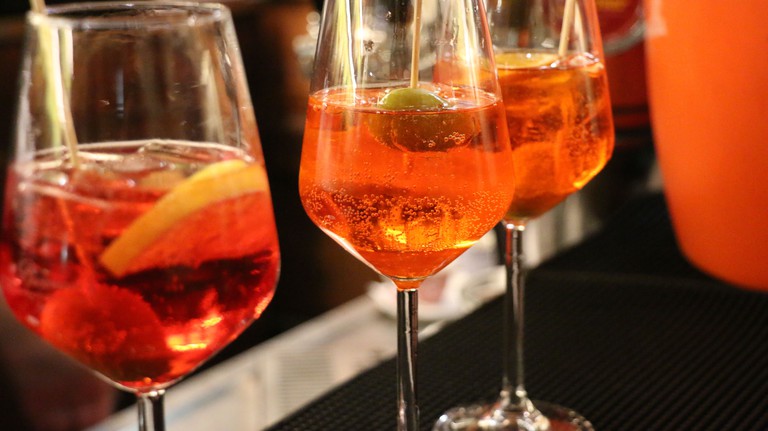 Many bacari were, and still remain, local working-class establishments that stay loyal to their Venetian clientele’s expectations. The Roman Guy’s Venice Food Tour begins with one of these traditional bacari, located in the area of the Rialto food markets. Al Mercà still functions as a pit stop between shopping for a quick drink and a nibble, emphasised by the lack of seating or even indoor area. Instead, clients mill around in the square in front, balancing their cicchetti on paper napkins. Here, The Roman Guy recommends opting for a Spritz, a combination of prosecco, soda water, and a choice of bitters including Aperol, Campari, or Venice’s own Select.

Instead of pandering to tourists with menu deals and internationally friendly dishes, bacari often serve up Venetian specialties so recognisable to regular clients that they don’t need labelling. This means, of course, that ordering can be a bit tricky if you’re not a local – but haphazardly pointing at tempting-looking dishes on the counter often results in discovering a whole new world of mysterious culinary delights. At Cantina Do Spade, which the Roman Guy describes as another of the “few old-style bacari” in the city, try putting your food and drink choices in the hands of the bartenders. As The Roman Guy says, it serves all the “delicious cicchetti you can imagine, including fried calamari, stuffed zucchini flowers, and liver pâté,” and the Venetian bartenders certainly know what’s best. 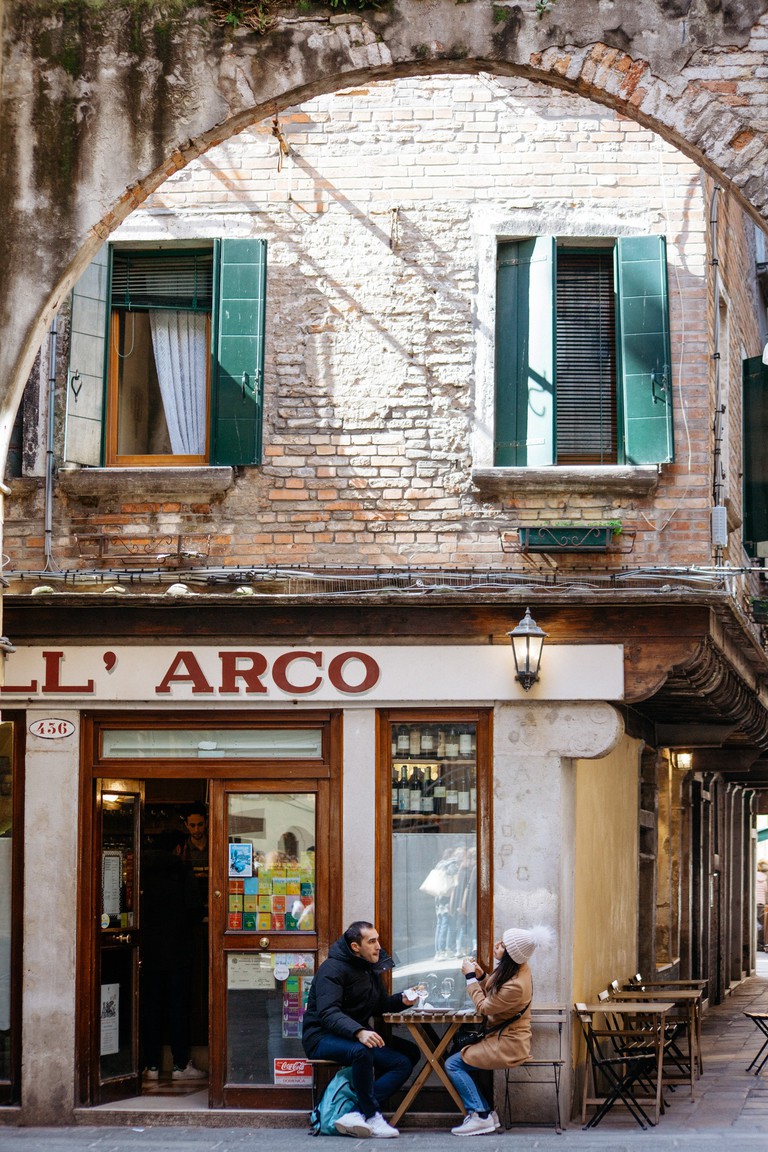 All'Arco in San Polo serves up traditional cicchetti | © Sandro Lazarri / Culture Trip
Old-style bacari are not only places to find authentic food, but also to experience the real, living city of Venice and its few remaining inhabitants. Visitors interested in hearing some Venetian dialect might stop by All’Arco, a place for stalwart residents and families. This bacaro may now be in many tourist guidebooks, but it has so far resisted the trivialising effects of mass tourism. Located near the Rialto fish market, owner Francesco and his son create a cornucopia of seafood-themed cicchetti every day, including Venetian classic baccalà mantecato, a creamy salted cod mousse. All’Arco’s meat speciality is the unmissable tender boiled veal cheek on bread.
Open In Google Maps
San Polo 436, Venice, Italy
+390415205666
Give us feedback 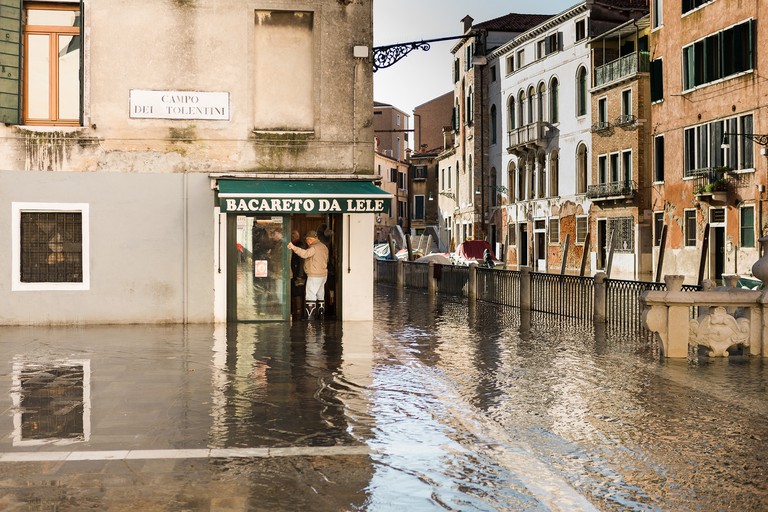 The tiny Bacareto da Lele is usually flooded with customers, rather than water | © Camilla Martini / Culture Trip
Most traditional bacari tend to be on the petite side, with standing room only, but none more so than Bacareto da Lele. This popular student haunt is notoriously tiny, and the great imbalance of the space-to-client ratio means the crowds that flock here turn the whole square outside into one big social space. Even the church steps are (perhaps a little blasphemously) commandeered as seating. But when the cicchetti is this good, a little sacrilege can be excused. Just five minutes from the railway station, Lele’s is a good place to wait for a train, with a Spritz and one of their signature mini panini helping to pass the time.
Open In Google Maps
183 Fondamenta dei Tolentini, Venezia, Veneto, 30100, Italy
+393478469728
Give us feedback 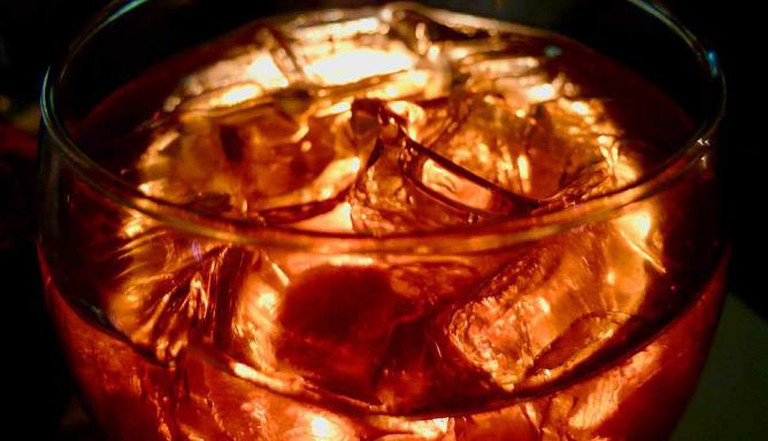 Enjoy a Spritz in Bacarando | © Luca Vanzella/Flickr
As local bars, bacari are also likely to be a little more off the beaten track. Your search for them might take you down unexpected routes, to areas a guidebook would not deem tourist-worthy (which, conversely, make them all the more attractive for the adventurous traveller). Getting lost is fortuitous in Venice, especially if it results in finding a cosy bacaro. Try arriving at Bacarando without a map, and the discovery of this newer bacaro in a little courtyard will be all the sweeter. The Roman Guy recommends it for its “live music on Wednesday nights, outdoor seating, and an inexpensive wine selection.”
Open In Google Maps
5495 Sestiere di San Marco, Venezia, Veneto, 30124, Italy
+390415238280
Visit Website
Visit Facebook page
Give us feedback

Due to the growing tourist interest in the tradition, new bacari are popping up all over the city. Most have moulded themselves in the image of the traditional bar, with a few modern tweaks. El Magazen, for example, serves classic Venetian cicchetti, including sarde in saor, fried sardines marinated with onions and sultanas, or more adventurous combinations like prosciutto and figs. It is also an advocate for other local crafts through its passion for upcycling – the wooden bar stools, for example, are made from pieces of discarded bricole (the wooden poles that are planted in the lagoon). 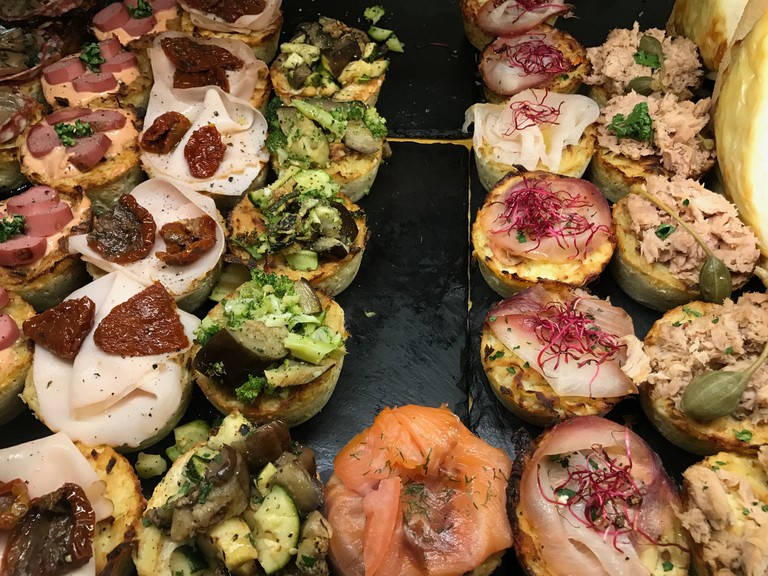 The Roman Guy ensures visitors get a taste of both tradition and modernity in their tour, by following up their stop in the Rialto markets with refreshments at Ai DiVini in the Cannaregio sestiere (district). Although they have adopted a classic wood-beam and exposed-brick look for the interior, their cicchetti are far from ordinary. Great hunks of prosciutto decorating the counter should sway you to their meat and cheese platter, while fish lovers can find octopus, baccalà, and even raw prawns. As the word play in their name suggests, their wines are also heavenly.