Everything You Need To Know About Italy’s Casu Marzu Cheese

This delicacy originates from the Italian isle of Sardinia and is deemed a secret treat for those brave enough to try the unusual dish. A sheep’s-milk cheese intentionally infected with insect larvae, casu marzu has a notorious reputation for being the most dangerous and illegal cheese in the world, with live maggots crawling within it.

Banned for sale by the European Union, this creamy, spreadable cheese is best enjoyed slathered on Sardinian flatbread (pane carasau) accompanied by a full-bodied glass of red wine. Casu marzu – famed for its texture and slightly spicy taste – is supposedly an aphrodisiac. 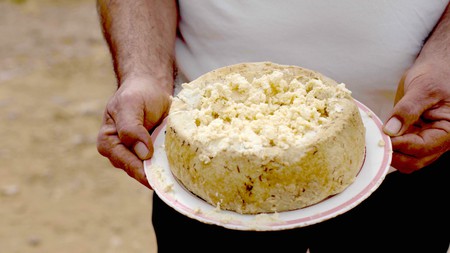 Despite casu marzu being considered a delicacy, there are precautions to consuming this cheese everyone should know about | © Culture Trip

The history of casu marzu

It’s not often that literal translations absolutely nail the concept, but casu marzu translates to ‘rotten’ or ‘putrid’ cheese. With its origins in poverty, in the past it was the poor who consumed it, as they were forced to eat whatever they could, including cheese that had gone off. Somehow, this cheese became a delicacy in the intervening years, with diehard cheese enthusiasts trying their utmost to get a taste of this forbidden flavour.

How do the maggots get inside the cheese?

It’s a surprisingly painstaking process to create casu marzu. Going beyond the normal fermentation, this sheep’s-milk cheese is allowed to reach a stage of decomposition. Holes are then cut into the pecorino (the name given to all Italian cheeses derived from sheep’s milk). These holes allow for flies to come and burrow into the cheese, laying their larvae down to incubate. The digestive action of the larvae gives casu marzu its soft texture, making it perfectly spreadable, with the wriggling maggots themselves appearing as tiny translucent worms around eight millimetres (0.3 inches) long.

Consuming this cheese presents you with some very real dangers and a series of potentially fatal consequences, so you better be sure you really want to take the plunge. With no reported cases of the cheese harming anyone, you have to assess whether that’s enough of a green light for you to go for it.

You are encouraged to eat the cheese with the maggots still alive on it, but you can try it with the wrigglers removed, too. That seems largely pointless though if you’ve already decided to try this – in for a penny, in for a pound. But if you do consume the larvae live, make sure you chew them to literal death because the consequences of them getting to your stomach and living in your intestine could cause death. It’s also deemed unsafe to consume the cheese when the maggots have died within it, but refrigeration sometimes counters this concern for a bit.

The larvae aren’t content with just living on the cheese either; they also want your eyes too! In a quite frankly horrendous side note to consuming the cheese, you also have to shield your eyes when taking a bite. When disturbed, these maggots can launch themselves up to distances of around 15 centimetres (six inches), which presents the very real risk that they will make a beeline for your eyeballs and decide to call them home.

There’s a reason the EU doesn’t want casu marzu to be consumed, with the cheese breaking practically every food hygiene and health regulation there is.

There’s no denying that casu marzu is a highly sought-after treat, and in Sadarina and the regions around it, it’s a bona fide delicacy. There are even regional variations of it, including casgiu merzu, which is produced in some Corsican villages. Although it’s a delicacy, does that outweigh the risks associated with consuming it?

That’s for the individual to decide, but with so many potentially fatal consequences linked to it, perhaps you’re better off sticking with baked camembert or a hearty cheddar to get your cheesy fix instead.

Casu marzu is also very hard to find. Breaking EU law means that the black market is the only way you can get hold of this, with prices doubling from standard pecorino. Alternatively, you could try having a private conversation with your local Sardinian restaurateur who might be able to point you in the right direction. Either way, casu marzu is certainly a cheese that could be the dividing line for fromage aficionados the world over.