Ennio Morricone: in Memory of the World’s Greatest Film Composer 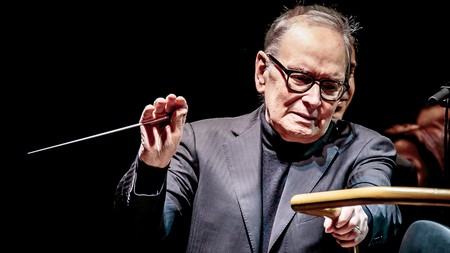 Ennio Morricone leaves behind an oeuvre that will continue to influence, and entertain, generations to come | © Sergione Infuso / Corbis via Getty Images

Ennio Morricone, who has died aged 91, created unforgettable music for the screen, producing award-winning soundtracks from 1960s spaghetti westerns to The Mission, Il Postino, and latterly, Tarantino’s The Hateful Eight, for which he won a long-overdue Oscar. Culture Trip looks back at the Italian composer’s extraordinary life.

Composer and musician Ennio Morricone was recently hospitalised in Rome, having broken his femur. His lawyer, Giorgio Assumma, confirmed Morricone had subsequently died on 6 July, surrounded by his family. 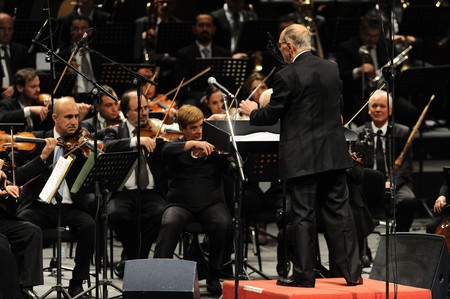 Hans Zimmer, widely regarded as the most successful film composer working today, readily deferred the honour of The Greatest to his contemporary. Zimmer released a statement saying he was devastated. “Ennio was an icon – and icons just don’t go away, icons are forever … His music was always outstanding, and done with great emotional fortitude and great intellectual thought.”

There is little debate over the Morricone’s status at the top of the film-score tree. With more than 500 soundtracks to his name, Morricone worked in every genre imaginable and left a lasting legacy on the landscape of cinema.

His work is unmistakable. That’s not to say he relies on the same sounds or instruments, but more that he has a style that visualises the full scope of the cinema screen. This was in evidence in his most recent Hollywood score, The Hateful Eight (2015), for director Quentin Tarantino, a self-confessed fan.

Here’s a look at the award-winning soundtrack.

“He’s my favourite composer, and I don’t just mean for movies. I mean in terms of Bach and everybody. He’s my favourite.” This quote from Tarantino came when the Once Upon a Time in Hollywood (2019) director was asked why he wanted to work with Morricone.

Quentin Tarantino’s earlier hit The Hateful Eight won Morricone his first Oscar, yet remains quintessentially true to the earliest works from the Morricone’s oeuvre. The lush landscapes on film were a perfect accompaniment to the soundtrack, when the opposite is usually true. The overture used by Tarantino in the extended three-hour cut is essentially an excuse to fully immerse the audience in the sound, with a malevolent and intense build-up that makes modern audiences squirm. 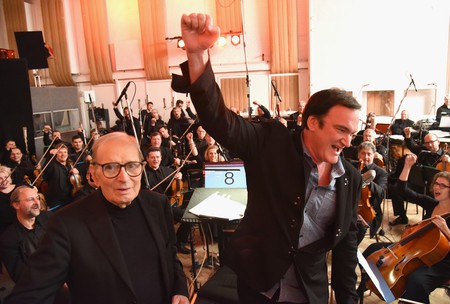 Morricone’s best works have a playful element to them too. We all know the sting in the tail of the main theme from The Good, the Bad and the Ugly because it’s a fun aside, but that’s not to say there isn’t substance to the piece. Moreover, his music has always captured the environment in which his films are set, from the searing heat of the desert to the whiteout of snow-covered mountains.

Morricone’s father was a highly regarded trumpet player, and it wasn’t long before Morricone, who was born in Rome in 1928, picked up the instrument too. He completed his four-year harmony programme within six months at the conservatory of the National Academy of St Cecilia in Rome; in fact he had begun composing original works at just six years old. 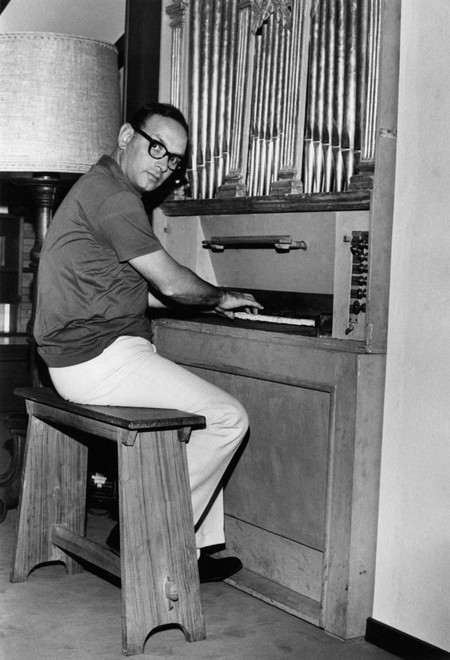 Morricone gained popularity in Italy thanks to his compositions for radio, most of which were in the “American style”. He quickly graduated to scoring films, and in 1955, one of the first movies he worked on won an award at the Venice Film Festival.

Gli Sbandati (The Abandoned) is set in post-war Italy, a landscape Morricone would have been all too familiar with. Although he was credited for the musical arrangement on the film, the composer was also writing several pieces as a ghostwriter at the time.

Much of his work at the time was a combination of film, TV and theatre work. “My first films were light comedies or costume movies that required simple musical scores that were easily created, a genre that I never completely abandoned even when I went on to much more important films with major directors,” Morricone once said of his early output.

He was also a member of the Gruppo di Improvvisazione di Nuova Consonanza (commonly known as “the Group”), a band of composers who performed and recorded avant-garde improvisations that performed from 1964 until 1980. Their compositions are considered to be some of the most sampled of all time.

Following on from a string of Italian comedies, Morricone began work on his most famous films. His name, and sound, will forever be most closely associated with the spaghetti westerns of Sergio Leone.

From a relatively small budget, the films were huge international hits. They made Clint Eastwood one of the biggest stars on the planet and created a sub-genre all of their own. The Dollars trilogy, featuring Eastwood’s Man with No Name, has arguably gone on to define westerns more than anything before or since. 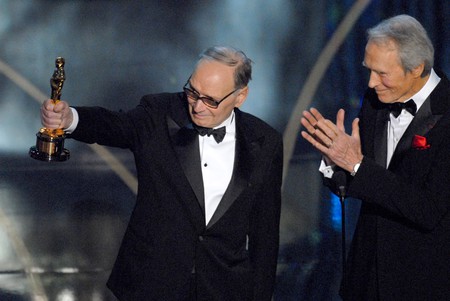 Morricone’s scores were often inventive – out of sheer necessity. The lack of a full orchestra meant sound effects and electric guitars were employed, creating a unique accompaniment to the gritty visuals.

Another notable aspect to Morricone’s earlier choices was the political edge they had. The Battle of Algiers, released in 1966 and controversial to this day, was a brave project to take on. Some of the more dramatic films from the composer’s back catalogue often get overlooked but are no less important.

A first Oscar nomination came in 1979 for Terrence Malick’s Days of Heaven (1978). Three years later, Morricone was responsible for one of the most terrifying soundtracks ever recorded, as well as one of his bestselling. John Carpenter’s The Thing (1982) was another example of Morricone tapping into memorable visuals to create something groundbreaking. The synth-influenced soundtrack proved his great versatility in the medium.

More success followed in 1987 with The Untouchables, a mobster caper that garnered another Oscar nomination. Brian De Palma’s enjoyable take on Al Capone and the elite squad tasked with bringing him down was a huge hit with audiences, and it remains his biggest commercial triumph. The golden statuette was still proving elusive, with a 1986 nomination for The Mission having also failed to deliver at the Academy Awards. 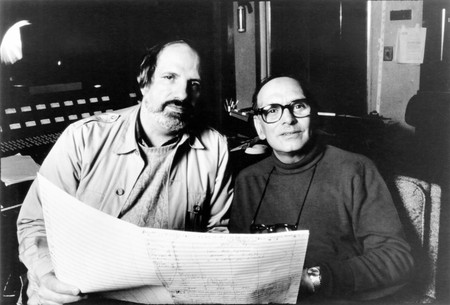 Having failed twice more with Bugsy (1991) and Malèna (2000), Morricone was eventually awarded an honorary Oscar in 2007. It seemed like he would join that unenviable list of celebrated names who never won the biggest prize of all.

Thankfully, in 2016, Tarantino offered Morricone, who was 84 at the time, the chance to work on The Hateful Eight, and the rest is history.

During a lengthy career, which included a number of Hollywood films, Morricone refused to conduct interviews in English. He spoke through an interpreter, be it on the red carpet or even in initial meetings with Tarantino.

Touring and performing until 2019, Morricone released his final movie soundtrack in 2016 for Italian movie The Correspondence.