Eat Your Way Through Venetian Cuisine With Venice’s Best Dishes 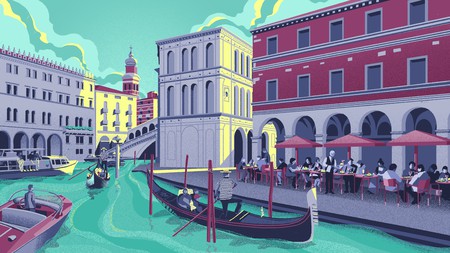 A holiday in Venice is synonymous with art, history and food – especially food. These are the best dishes to try if you’d like to experience a complete, traditional Venetian meal.

Although pizza and pasta may be its most famous exports, Italian cuisine is extremely varied, and each region has its own characteristic flavours and dishes. Here are the Venetian specialities you can’t miss, from starters through to desserts. 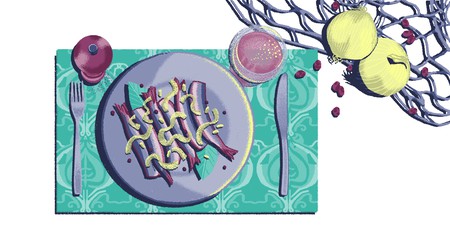 Served in local bacari (bars), cicchetti are the stars of the aperitivo (nibbles eaten with drinks) but can also be eaten as starters. They consist of small snacks similar to Spanish tapas, ranging from fried finger foods to single slices of baguette topped with fish, vegetables or cold cuts of meat. These delicious treats originally came with an ombra (shadow), a small glass of wine that, legend has it, takes its name from a habit of wine merchants, who would move their stalls around Piazza San Marco to follow the shade so that the wine wouldn’t be spoiled. Even nowadays, Venetians will say “Let’s go grab a shade,” meaning have a glass of wine.

If you’re walking in the Rialto area and you want to try some first-rate cicchetti, head towards the hidden courtyard of Bacarando alla Corte dell’Orso; the ever-changing choices here are worth every penny. If you’re wandering around Cannaregio and looking for something cheaper, try some of the best finger food in the city at Da Luca e Fred.

Made of creamed cod paste, baccalà mantecato is softened and dried cod blended with garlic, olive oil, parsley, salt and pepper. It can be served either as a cicchetto, delicately spread on some bread, or as a starter with some polenta, a dish from Northern Italy made of coarsely ground yellow corn.

Poenta e schie, a typically Venetian starter, is made out of the above-mentioned polenta (Venetians tend to lose the “l” sound) and schie, a kind of shrimp that lives only in the lagoon area between Venice and Trieste. Typically found at fish markets, schie can be bought alive and are usually fried and eaten immersed in a hot serving of white poenta. Although it originated as a dish eaten mostly by the poor, nowadays poenta e schie is a popular choice in most restaurants and goes perfectly with a nice glass of prosecco.

In Venice, fish are rarely caught on Sundays, so it’s best to order fish any day except Mondays, so that you can be certain it’s fresh.

Sarde in saor is one of the most popular dishes in Venice; its name means ‘sardines in flavour’, which perfectly captures the savouriness of this dish. Mentioned in multiple works by Carlo Goldoni, the most famous playwright of the Republic of Venice, sarde in saor consists of sardines cooked with a sweet-and-sour sauce made of onions, vinegar, raisins, pine nuts and wine. This dish is typically at the centre of meals during the Festa del Redentore (the Feast of the Redeemer, a religious festival) and apparently originates from Venetian fishing folk, who used vinegar to preserve the fish they took with them on boats to eat while they were away. 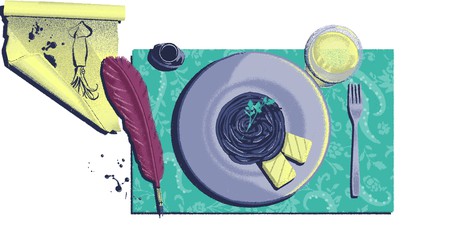 Usually served in spring, risi e bisi is a light and healthy main course made of rice and peas. Created in Vicenza (a city once part of the Republic of Venice, now in the Veneto region), the dish became popular from the 15th century onwards thanks to its rich flavour and accessible price. In fact, rice was largely promoted and grown in Venice because of its low cost. The Doge himself made risi e bisi an important and symbolic dish by holding a plate of it during the yearly celebrations on 25 April (Saint Mark’s Day, the day of the patron of the city).

When in Venice, spaghetti al nero di seppia is a must. The name means ‘squid-ink spaghetti,’ and the dish itself is every Venetian’s delight. Easily recognisable for their colour, these strands of black spaghetti are first cooked with squid pieces and then coloured with the animal’s ink, which is carefully removed from its pod.

If you want to try this dish but you’re uncertain if the fishy taste is for you, buy a cheaper, to-go serving. Walking around Dorsoduro, just before Ca’ Foscari Palace, you’ll find a tiny pasta shop called Bigoi, which offers fresh takeaway pasta. Pop in for a cheap, delicious meal.

Bigoi in salsa is an authentic Venetian dish that consists of bigoi, a thicker kind of spaghetti, immersed in a rich sauce. The salsa (sauce) is made of anchovies and finely cut onions, slowly cooked in olive oil. Though seemingly simple, this dish needs to be cooked accurately to be tasted at its best; when it’s done right, it’s pure joy for the palate.

This dish was typically consumed during i giorni di magro, the days of Catholic abstinence such as Christmas Eve or on Fridays, when many Catholics refrain from eating meat. 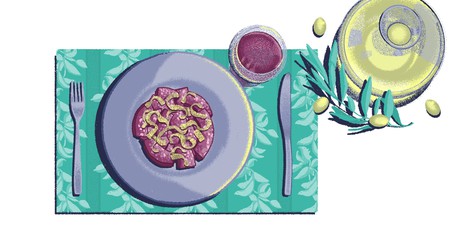 Definitely a delight aimed at the more adventurous eater, fegato alla veneziana means ‘liver cooked the Venetian way’. This dish is as simple as it is succulent; the liver is cooked with olive oil in a bed of onions, and usually served with a side of polenta.

One of the best places to have it is in Dorsoduro, one of Venice’s six districts (sestieri), in a small, lovely restaurant called Osteria Dona Onesta, where you can sit facing a picturesque canal and tuck into this traditional delicacy. 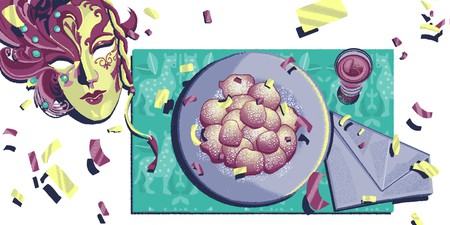 Sold only during Carnival time (Venetians are extremely strict with this rule), fritoe or frittelle are fried doughnuts that can be stuffed with raisins, chocolate, pastry cream or apples. Slightly crunchy on the outside and soft on the inside, they are delicately scattered with sugar, and make every Carnival special. Bought in a rush on the way to work or enjoyed with an espresso under the February sun on a chilly day, frittelle are a must for anyone in Venice during the winter months.

One of the best places to buy them is Pasticceria Tonolo, a Venetian institution that is a meeting point for Venetians and students alike; though it’s packed for most of the day, it’s definitely worth the wait. Your taste buds will thank you.

Buranelli or buranei are a type of biscuit that originates from the colourful island of Burano, just a short ferry ride away from Venice’s main tourist highlights. Today you can find them in their original circular shape or in the shape of an S, the latter being the perfect size to dunk in your coffee or tea.

If you’re looking for a great excuse to visit one of Venice’s most beautiful spots, head to Pasticceria Palmisano Carmelina on Burano Island for some of the best buranei the city has to offer. Take the vaporetto (water bus) for a truly Venetian experience.