Did D&G Just Declare the End of the Model? 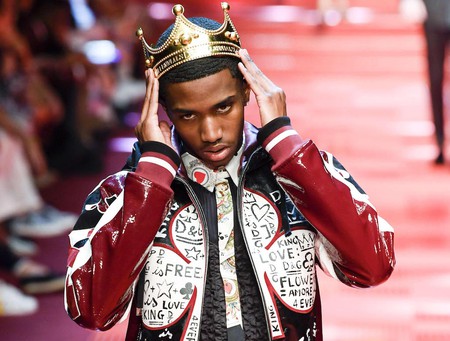 At Milan Men’s Fashion Week, Dolce & Gabbana spurned traditional models in favour of 100 influencers. While this isn’t the first time a fashion brand has chosen ‘real’ people on the catwalk (D&G have mixed it up season on season) forgoing the model entirely invites a new precedent – is it the beginning of the end for traditional models?

The ‘model’ – once understood as not much more than a beautiful face – has been in flux for a few years now. Thanks mainly to platforms such as Instagram and Snapchat, and led by the likes of Cara Delevingne and later Adwoa Aboah, a seismic shift has occurred. Now models need personalities, and that’s what people love them for. Privacy has been forfeited in favour of personality, which in turn has led to a generation of young men and women who can leverage their striking looks for good; models have a voice and activist agendas. Forget Kate Moss brooding smokily for Corinne Day, nowadays supermodels are so because they nail everything.

But this premise of the girl or guy who has it all still existed, still exists, with a model-first (or at least dually operating) structure. As in, these supermodels are good looking and have fantastic bodies. Flawed, unconventional, goofy – yes, but they’re not ‘normal’.

This movement can trace its origins back to street casting, a new approach to fashion that occurred in the nineties. Stylists and editors looked to everyday kids to represent their brands, and magazines such as i-D and Dazed embodied the new celebration of youth culture. These kids were cool and you could identify with them, it was a move that harnessed the apex of youth culture and set a new precedent for the kind of fashion imagery you could create. Crucially however, these kids were still beautiful: young, skinny, tall and in every way model-esque. Yes, they were more diverse but they were also a little out of reach, and elevated to lofty heights through the lens of legendary photographers such as Steven Miesel and Mario Testino.

The end of the catwalk show

In parallel to this, fashion has seen the crisis of the catwalk show. Traditionally an exclusive event to debut new work to those that mattered, the digital age has rendered the format redundant. Anyone can access the images in real (or almost real) time and audiences across the globe can form opinions about a collection faster than the editors sitting on the front row. As such, designers are desperately having to find new formats to present clothes, or at the very least to harness the global audience in a savvier way.

Amongst this climate, enter Dolce & Gabbana’s Milan menswear show. Evidently aware of the shifts in dynamics, the Italian duo replaced traditional models with 100 of the Internet’s finest influencers. The models’ social media credentials were listed in the accompanying show notes – Mexican Juan Pablo Zurita has over 10 million followers; Made in Chelsea’s Spencer Matthews, 556 thousand; Anwar Jibawi, a casual 4 million.

Beauty here was secondary to their digital punching power. This wasn’t the first time the Sicilian duo have drawn on millennials and their followers – but is it a formula that will change the catwalk landscape forever?

The answer in short is yes: with luxury brands already tapping into the power of influencers, especially in China, it’s unlikely they will shift back to a position where models are just clothes horses. It’s a new format which proves you don’t have to be 6ft 10 and slim to sell. So for now, aspiring models better start working on their caption game – though chiselled abs has never hurt anyone.