'David' for Dummies: A Guide To Michelangelo’s Masterpiece

Michelangelo’s David is arguably the most famous sculpture in the world. Ever wondered why? We’re here to decode the basics and shed some contextual light on Michelangelo’s stunning masterpiece. 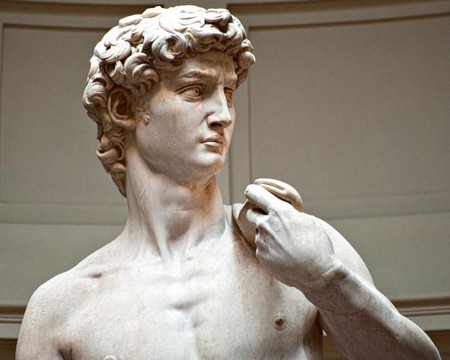 Michelangelo was one of three central Renaissance artists alongside Raphael and Leonardo da Vinci. In 1501, he got to work on a marble sculpture of ‘David,’ commissioned for the roof of Florence Cathedral. Instead, the statue ended up in the square outside the seat of the civic government, otherwise known as the Palazzo della Signoria. When the impressive 14-foot biblical hero was unveiled in 1504, crowds were astonished. While ‘David’ was a common figure in Renaissance art, this depiction was unlike anything anyone had seen before. It was common to see David standing victorious over Goliath, but Michelangelo chose to portray him before the fight, exhibiting apprehension rather than triumph.

David and the City of Florence

Art historians have long maintained that the connection between the figure of David and the city of Florence was largely political, in that David represented the spirit of Florence in the face of political adversity. At a time when Michelangelo was chipping away at the block of marble that would eventually become the most highly-praised sculpture from the Italian Renaissance, Florence was an independent city-state under the overbearing control of the Medici family. David’s ominous stare and readiness to fight is commonly interpreted as Florence’s desire to defend itself and protect its civil liberties. 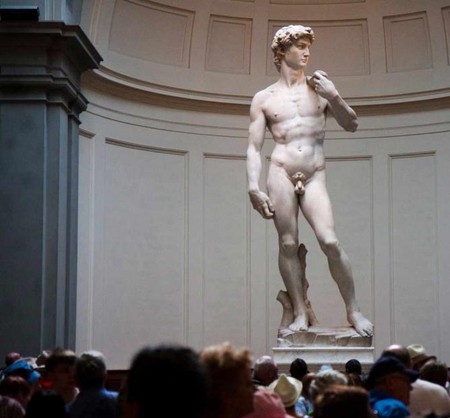 David was created to represent the ideal male form; young, attractive; and the picture of health. Michelangelo was known for illegally dissecting corpses for a better understanding of the human body, and this sculpture shows the results of his otherwise questionable work.

Giorgio Vasari was the author of Lives of the most excellent painters, sculptors and architects (1550), which is often regarded as the first ever art historical document. In it, he praises Michelangelo for David’s perfect form: “For in it may be seen most beautiful contours of legs, with attachments of limbs and slender outlines of flanks that are divine; nor has there ever been seen a pose so easy, or any grace to equal that in this work, or feet, hands and head so well in accord, one member with another, in harmony, design, and excellence of artistry.”

David was so special that he was moved from the Palazzo della Signoria to the Galleria dell’Accademia in 1873 to protect him from the elements, and he remains there today. A copy has been placed in the original site in the square, which many tourists mistake for the real David. 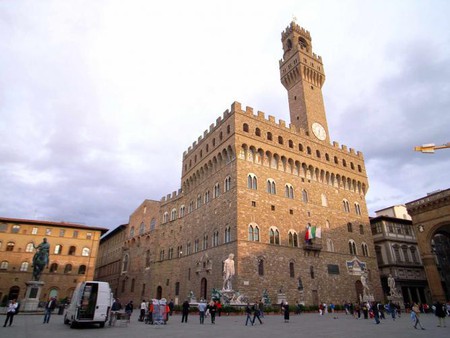 The term contrapposto refers to the way David is standing; with a slight twist as he gazes off into the distance, supposedly towards Rome. Michelangelo was praised for achieving this complex pose from a block of marble, but was also criticised for other aspects of the sculpture. He was accused of enlarging David’s head and hands until they appeared disproportionate to the rest of his body, but considering the statue was originally destined for a roof and therefore to be viewed from below, it’s likely that he did this on purpose as the perspective would have been different. Another theory is that Michelangelo enlarged David’s head to emphasize his intense facial features.