Exploring the Burning Fields of Naples 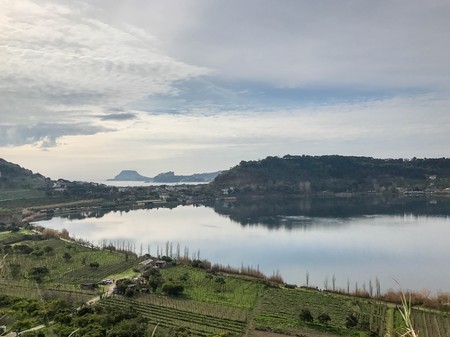 Lake Avernus in the heart of the Campi Flegrei | © Ulrike Henn

Approximately 12,000 years ago, a massive volcano erupted just outside Naples. Not only did this eruption form the Bay of Naples and the islands of Ischia and Procida, it also forever altered the continental shelf of Europe – and the volcano is still active. Although it has been dormant in recent years, it silently looms, ready to erupt and, strangely, millions of people still live in its immediate vicinity. So, which volcano is it?

If you guessed Vesuvius, you guessed wrong. It is the Campi Flegrei, or burning fields. This underground volcanic caldera is one of 12 super-volcanoes in the world. Since ancient Greek times, inhabitants of the region have possessed a reverence coupled with a deep fear of this super-volcano. The Campi Flegrei is home to a vast cultural patrimony which includes a reported entrance to the underworld, a sunken ancient city and a female oracle who has predicted the future for over 3,000 years. 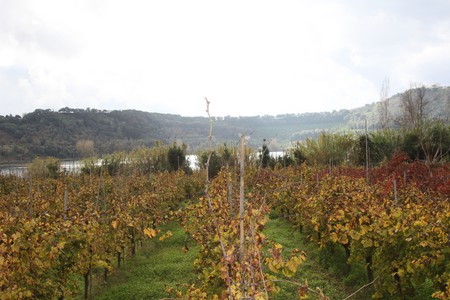 An almost perfectly circular volcanic crater-lake, Avernus was once thought to be the entrance to Hades. In The Aeneid, Virgil describes Aeneas’ descent to the underworld through a cave on the shores of this lake. Caesar’s general, Marcus Agrippa, converted the lake into a naval base and staged battle practices here. Ancient Romans were afraid to live on the shores of the lake, yet many farmers and vintners valued the surrounding lands for their distinctly fertile volcanic soil. Even today, Neapolitan families rent plots of land here to grow organic produce and visitors can stroll around the ancient lake.

An ancient tunnel connects Lake Avernus to an even stranger local curiosity, the Cumaean Sibyl. Sibylla means prophetess in ancient Greek and there were many of these female future-seers across the ancient world in places like Delphi, Turkey and Libya. Aeneas consulted the Cumaean Sibyl before descending into the underworld and today you can visit her cave at the Archeological Park of Cuma. 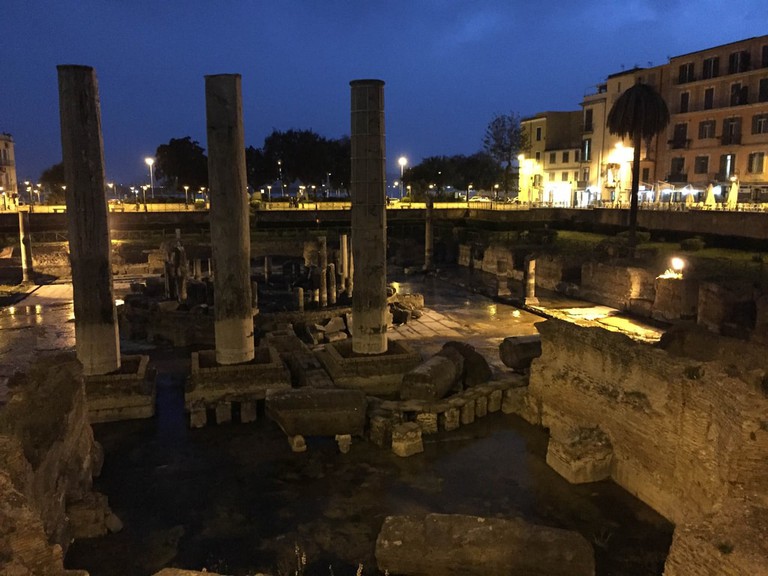 Temple of Serapis in the center of Pozzuoli | © Ulrike Henn

Rione Terra and the Temple of Serapis

The largest city of the Campi Flegrei is Pozzuoli. The name Pozzuoli belies an interesting fact about the region as, due to the several volcanic vents and fumaroles in the area, it smells strongly of sulfur here. Puzza means ‘stink’ in Italian and, on a windy day, Pozzuoli does in fact smell like rotten eggs. The ancient Greeks must have enjoyed the smell because they formed a city here several hundred years before the Common Era, and you can visit the walls of the old city and its port at Rione Terra. Call ahead to reserve guided visits in English or Italian.

Also located in Pozzuoli, this amphitheater is the third largest in Italy after the Roman Coliseum and the nearby Capuan Amphitheater. Scholars believe the same architects who designed the Coliseum also designed Pozzuoli’s amphitheater in 200CE. In 305CE, Roman authorities attempted to execute Naples patron Saint Gennaro here, and although there is no chance of witnessing a martyring there today (we hope!), you can visit the little cells early Christian martyrs were kept in underneath the theater.

The Sanctuary of San Gennaro at Solfatara

Fearing the growing clout of early Christianity, Roman emperors ordered the executions of many early followers, including that of Saint Gennaro. Having survived a wild bear mauling at the Flavian Amphitheater, Gennaro was beheaded at the volcanic site of Solfatara, then buried by early Christians at the Agro Marciano cemetery in the modern-day Neapolitan neighborhood of Fuorigrotta. Several centuries later, devotees of San Gennaro moved his remains to his current resting place in Naples, the Catacombs of San Gennaro and, in 1574, Saint Gennaro’s devotees constructed a church above the site of his martyring. Whether you are a believer or not, this little yellow church above the volcanic craters of Pozzuoli’s Solfatara is something rather magical. 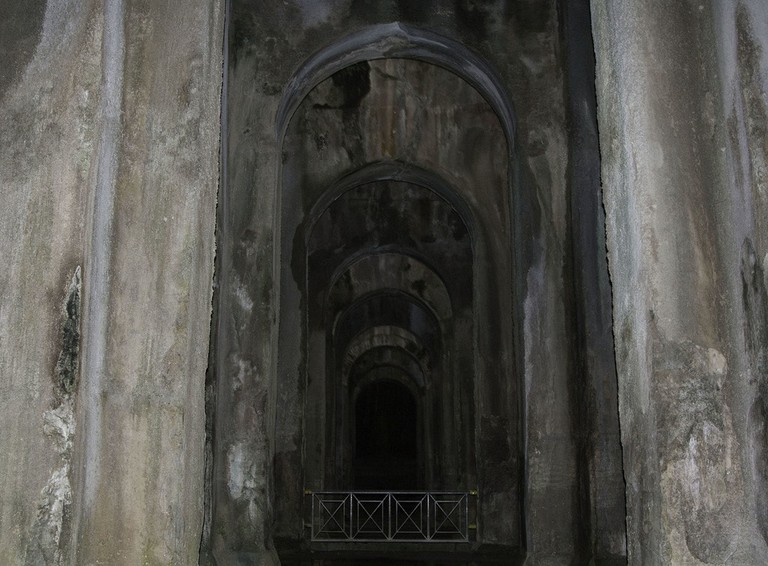 The Romans constructed a massive architectural feat in the form of the Serino aqueduct system, supplying water to eight major cities in the empire including Naples, Pompeii and Herculaneum. Piscina Mirabilis, a freshwater cistern in Bacoli that was part of the Serino aqueduct network, stands today as a testament to the Roman Empire’s engineering prowess. A visit to the Piscina Mirabilis will transport you back in time and leave you marveling at early Roman ingenuity. The piscina is open to the public, but visits must be arranged by phone in advance.

At the northwestern limit of the Gulf of Naples, Capo Miseno juts into the sea just a stone’s throw from the island of Procida. According to myth, Aeneas’ friend Misenus used to play a conch shell trumpet at this site and often challenged the sea god Triton to musical duels. The Cumaean Sibyl once told Aeneas that, when Misenus died, his body must be buried before he could enter the underworld at Lake Avernus. Virgil recounts Misenus’ funeral rites in The Aeneid, forever cementing the Roman emphasis on reverence for the dead and burial customs theretofore unheard of in this part of the world. In Misenus’ honor, Aeneas called this scenic point Capo Miseno.

At the height of the reign of the Roman Empire, the ancient town of Baiae was a popular seaside resort for the patrician classes. Everyone from Cicero to Caesar vacationed here for its panoramic views of Naples and thermal baths. After several earthquakes (caused by underground volcanic rumblings), and subsequent Saracen raids, the town was abandoned and, over time, it sunk into the sea. Today you can visit a remarkably well-preserved statuary and the remains of the town of Baiae through glass-bottomed boats, snorkeling or scuba diving. 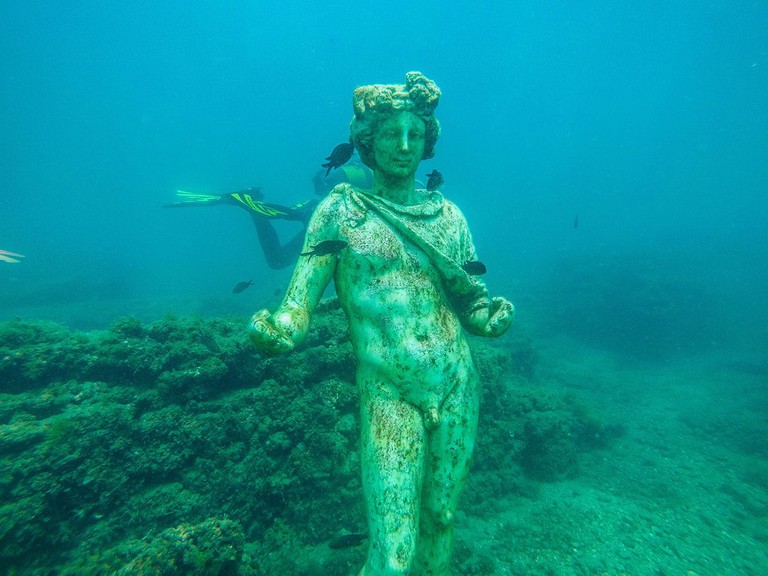 Directly across the island of Procida is a town on terra firma called Monte di Procida. According to local legend, a beautiful young woman named Acqua once greeted a handsome fisherman, Giosuè, at this site every day. One afternoon he failed to arrive at port and, when Acqua later learned that he was lost at sea, she cast her body into the water in a passionate fit of despair. To this day the port is known as Acquamorta, or dead water. The tragic love story notwithstanding, the charming port and local beach, just off the beaten tourist path, are where local fishermen sell nets of their catch every morning and afternoon.

The ancient Greeks bathed here, later followed by the Romans and now you can, too. The Agnano thermal baths remind us that the origin of the word spa is actually a Roman acronym for sanus per aquam, or health by water. The volcanic waters of the Campi Flegrei are world-renowned for their therapeutic properties, and Agnano has more than ten indoor and outdoor pools with different mineral concentrations. These are reputed to ease conditions including depression, bronchitis and asthma, and you can even book an inhalation treatment to breath in vaporised mineral-rich volcanic water. Take a bath where Romans once bathed and book a massage for extra pampering.