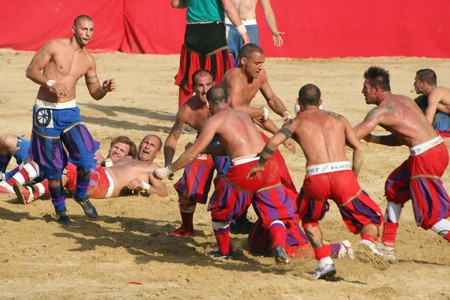 With a history dating back to 14th century Italy, Calcio Storico Fiorentino is an old form of football that has survived the test of time. With games taking place every year in June in Florence, Aalia Ahmed investigates this historical and somewhat brutal sport.

Every year in June thousands of people gather in one of Florence’s most famous piazzas to witness the historic sporting battle of the ‘Calcio Storico Fiorentino’. Since the earliest recordings of the game’s existence in the 14th century, the giuoco del calcio fiorentino continues to be played in the same arena that gave birth to it over seven hundred years ago: the piazza of Santa Croce. 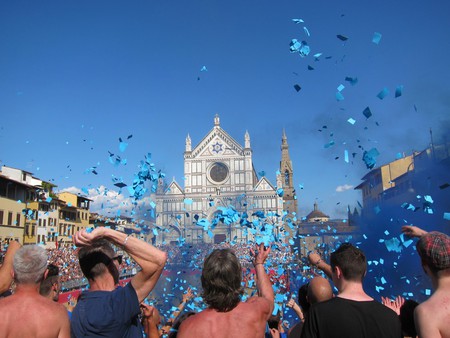 During the Italian Renaissance the piazza of Santa Croce was host to a number of important and significant events including the wedding of Lorenzo the Magnificent, as well as serving as the ground upon which great preachers, such as Bernadino of Siena, held their compelling sermons. It is truly a spectacular, and somewhat ironic, sight to see this humble, stony ground that is watched over by the magnificent statue of a pensive Dante transform into what resembles a gladiatorial arena. With the carpet of sand covering every inch of the pavement and the robust iron cages that separate the spectators from the players, this event seems to be miles away from the refined and graceful football we know today. The hallowed ground of the church of Santa Croce – which houses the tombs of some of the most illustrious Italians such as Michelangelo, Rossini, Machiavelli and Galileo – becomes the passive host of one of the most brutal sports of modern times.

Each game is made into an extraordinary exhibition where brightly costumed dignitaries on horseback, trumpet fanfares, marching drums and flag-throwers gather in the arena before the match begins. Shortly after the fabulous display of pageantry the players enter the battleground donning their historic team colours to begin the 50 minute sporting warfare. There are four teams in total made up of 27 men, and each team represents one of the four quarters of the city: the Azzurri for Santa Croce (Blue), the Rossi for Santa Maria Novella (Red), the Bianchi for Santo Spirito (White), and the Verdi for San Giovanni (Green). To win, the players must get the ball over the four foot fence at either end of the pitch. To achieve this, the players are permitted to use both their hands and feet to assist them in their various means and methods of attack. The general sight is one of players diving, wrestling, punching, head-butting and choking in a whirr of sand, sweat and blood. However, when a goal is finally scored it is hailed by canon fire which is greeted with a tremendous roar from the frenzied crowd.

After battling it out against one another in the two opening games, the two teams that are victorious proceed to the final, which occurs each year on St. John’s Day on the 24th of June. Indeed, it is remarkable that such an astounding sport has managed to survive the test of time. Every year the event still attracts tourists from all over the world, providing them with a unique opportunity to look through this window of time back into an excessively dark and physical past that remains, nonetheless, exhilarating.