Brave the Walk of Faith Over the Ponte Tibetano

The Tibetan Bridge, as its name suggests, is inspired by the famous footbridges of the Himalayas

The slats on this towering Tibetan-style bridge look very small compared to the vast Alpine landscape around it. The Ponte Tibetano is the longest bridge of its kind in the world, reaching through the air for half a kilometre (0.3 miles) along an epic rocky canyon in Northern Italy.

Those brave enough to cross the Ponte Tibetano will walk up to 90m (295ft) over the valley floor, with views of blue skies, waterfalls and jagged peaks. 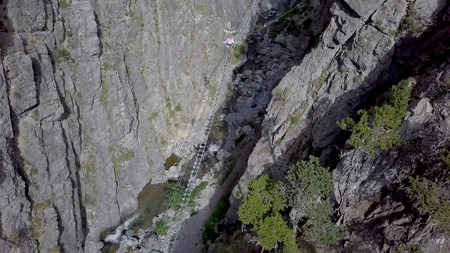 Conifers cling to rocky outcrops and water trickles along the valley below. And if walking on air isn’t enough, you can take a detour on an iron ladder up the cliff itself, and explore tunnels dug into the mountain.

The Ponte Tibetano is in the mountains 100km (62mi) west of Turin, near the village of Cesana Torinese. It runs along the San Gervasio Gorge, right next to the border with France. There are actually three bridges: a short stretch that takes you out into the gorge, followed by the main bridge that heads up the gorge, suspended around 30m (98ft) above the ground.

The final stretch is only 90m (295ft) long – but it’s also 90m (295ft) high. It’s possible to branch off at this point to clamber along the cliff itself on a via ferrata – in which iron rungs have been driven into the rock, creating a giant ladder. The via ferrata connects with tunnels that were used during World War I and lead to a viewpoint.

Depending on how you measure the route, it’s 468m (1,535ft) or 544m (1,785ft) long. The main section takes around 90 minutes, and the via ferrata an hour on top of that. The bridge may look like it could blow down any minute, but it’s surprisingly stable, and there’s a safety rail that you clip yourself onto using carabiners and a harness.

The Tibetan Bridge, as its name suggests, is inspired by the famous footbridges of the Himalayas. These suspension bridges feature slats held up by cables strung across a gap. The cables – and thus the walkway itself – sag in the middle, creating their classic dipping shape.

Dramatic pedestrian bridges can be found all over the world, particularly in mountain regions where they offer great views – and an amped-up fear factor. In Russia, the Sochi SkyBridge is a huge 439m-long (1,440ft) structure with views of the Black Sea and an accompanying zip line. In France, meanwhile, the Aiguille du Midi bridge sits a staggering 3,842m (12,605ft) above sea level. It connects the north and south peaks of the Aiguille du Midi, and offers close-ups of Mont Blanc.

As for the longest bridges, the Charles Kuonen Suspension Bridge in the Swiss Alps, near the famous Matterhorn, is 494m (1,621ft) long, though it lacks the classic Tibetan bridge-style slats. And while many of these bridges cross ravines in the icy mountains, warmer options are available: the 530m-long (1,739ft) Taman Negara National Park bridge in Malaysia heads through a 130-million-year-old rainforest inhabited by tigers.

So, while Ponte Tibetano may not be home to any big cats, if you measure its whole length it is the longest bridge of its kind in the world. The best way to appreciate that fact? Get halfway across – and get an eyeful of the raw landscape around you and the swaying rungs below your feet.

The bridge is open every summer, though it may close if the weather is particularly bad. If you’re in the region in winter, there are several ski resorts in striking distance. All equipment can be hired at the start of the route, and there’s no need to book. During busy periods you may have to wait to access the bridge – peak times are 10.30am–4pm on Saturday and Sunday. It’s around a 90-minute drive from Turin, or two hours from Chambéry in France.