Artichoke Wars: Rome and Israel Clash Over Kosherness of Vegetables 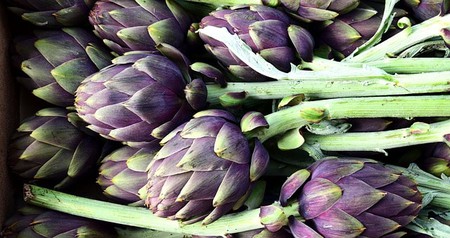 Artichokes before being prepped and deep fried | © ulleo / Pixabay

The famous delicacy has become the centre of religious turmoil, with the Roman Jewish community embroiled in an argument with Israel’s top religious authority, who has claimed that the dish is not kosher.

Golden, crisp and delicious, Rome’s carciofi alla giudia (or Jewish-style artichoke) is more than just a deep-fried whole artichoke. It is a symbol of the city.

But now, Israel’s Chief Rabbinate has said that the nature of the vegetable dish, which is a speciality of the Jewish community in Italy’s capital and a menu mainstay, means it cannot possibly be considered kosher.

“The heart of the artichoke is full of worms, there is no way you can clean it,” the head of imports of Israel’s rabbinate, Yitzhak Arazi, said in an interview with Israeli national newspaper Haaretz. “It can’t be kosher. It’s not our politics, this is Jewish religious law.”

The notion that such a beloved dish should be declared trayf, or non-kosher, just before Passover provoked uproar among Roman Jews. The dish has been a city favourite since at least the 16th century and many restaurants in Rome’s Jewish quarter advertise the vegetables from spring onwards, when they are in season.

The dish involves a carciofo (an artichoke) that has been cleaned with a paring knife in a spiral motion to remove all the inedible external leaves and petals. The artichoke is then submerged in medium-heat oil for around 10 minutes before being drained and dried. Just before serving, it is refried in hotter oil, deliciously crisping the outer shell and rendering the inside tender.

The Roman community reacted with disgust to the rabbinate’s proclamation. “We’ve been eating this dish prepared this way for 600 years,” said Umberto Pavoncello, the manager at Nonna Betta, a popular kosher restaurant. He believes that it was “very unlikely” that insects resided inside the artichoke and said that his restaurant would “continue to serve them”.

The crux of the defence is that insects find it impossible to penetrate a Roman-style artichoke’s tightly overlapping leaf structure. Umberto Pavoncello said: “The leaves of local artichokes are very compact. That makes them impenetrable to insects.” He added that no Roman rabbi has ever raised the artichoke as an issue. “The declaration comes from the Israeli rabbinate but locally every community has its own rabbinate which can decide for itself – there is no central authority,” he said.

Indeed, one local rabbi, Umberto Piperno, stated that “Jewish Roman women know how to inspect the artichoke, and better than the rabbis.”

Carciofi defenders argue that those wanting to ban the dish haven’t taken its large cultural significance into account. The origins of the food are entwined with Roman Jewish history. When Jews were first confined inside the ghetto by Pope Paul IV, they were restricted from entering many professions. Food preparation was one of the few activities that was permitted, so many Jewish people, especially Jewish women, opened food stalls selling fritti (deep-fried foods). While these stalls are now gone, their culinary influence persists.

Rome’s Jews say that the issue should be decided according to what is a basic principal of kosher law: that each Jewish community around the world can individually decide whether produce is cleaned in a way that makes it kosher.