An Introduction To Early Renaissance Art In 12 Works 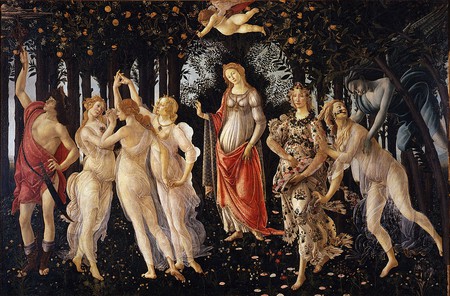 Artists began to move away from Gothic art at the turn of the 15th century in Italy. Known as the Early Renaissance, this phase lasted for about 90 years, after which many experts agree that the High Renaissance took over. While many countries had their own Renaissance art, we take a look at the Italian Early Renaissance and give you an introduction through 12 of its best examples.

The Florence Cathedral, or Il Duomo di Firenze, is a Gothic structure that was begun at the very end of the 13th century in 1296. Filippo Brunelleschi, a goldsmith, architect and designer, was hired to renovate the back end of the church and to add a dome – with both an inner and outer shell – to the structure, an engineering feat guided by his mastery of mathematics. As the Renaissance was about breaking away from the Gothic style and going back to classical artwork, it’s no surprise the dome harkens back to the Romans, as he mostly like studied classical architecture during a trip to Rome in the early 1400s.

Expulsion from the Garden of Eden (1425) – Masaccio

Tommaso di Ser Giovanni di Simone, better known as Masaccio, was a major player in the Renaissance who was particularly good at portraying realism in his works, from anatomy to emotions – both of which were rare at this time. One excellent example is the Expulsion from the Garden of Eden from 1425. A fresco located inside the Brancacci Chapel in Florence, Adam is hiding his face with his hand while Eve’s face is uncovered, exuding anguish; it’s easy for the viewer to recognize that both figures are incredibly distraught – their body postures add to the emotion of the artwork. While some photos of the fresco show fig leaves covering their private areas, they were never meant to be there and were removed when the fresco was restored. 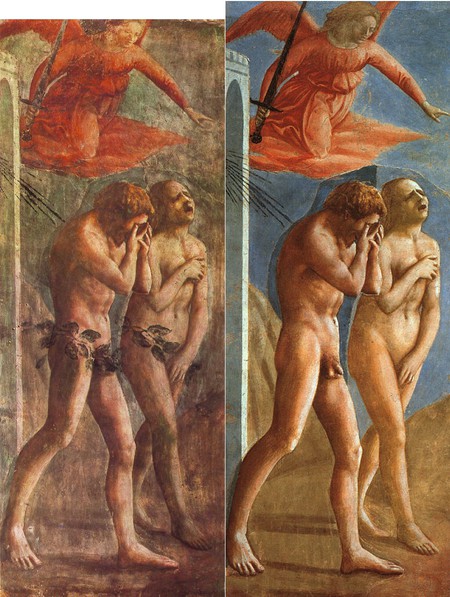 Masaccio, Expulsion from the Garden of Eden (before and after restoration), 1425 | © Cappella Brancacci/WikiCommons

Designed for the north entrance of the Baptistery of San Giovanni in Florence but eventually placed at the east entrance, the Gates of Paradise are gilded bronze doors created by Lorenzo Ghiberti. A true masterpiece of the Early Renaissance, the doors feature 10 relief panels depicting various scenes from the Old Testament, including The Creation, Story of Abraham, and Jacob and Esau. The incredible detail (they took 27 years to complete) influenced not only his generation but future generations of artists. You can see copies of the panels at the Baptistery, but if you want to see the originals, then you’ll have to visit the nearby Museo dell’Opera del Duomo. 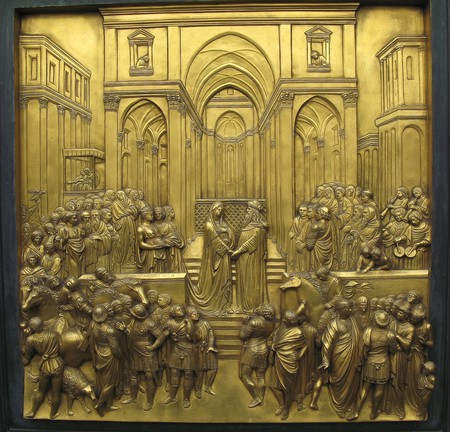 One of the most famous examples of Early Renaissance sculpture, Donatello’s David is much different than Michelangelo’s High Renaissance version of the same subject. Born Donato de Niccoló Bardi, Donatello’s David is believed to have been commissioned by Cosimo de’ Medici. What makes this piece quite unique for the time was that it was the first freestanding nude sculpture since antiquity, and the body itself is feminine, speaking to the fact the David portrayed is a young man. Wearing a hat – the same type they would have worn during those times – David, who has long hair, is standing on Goliath’s head, revealing to the viewer that he had just slain the enemy. Today, the sculpture can be seen at the Museo Nazionale del Bargello. 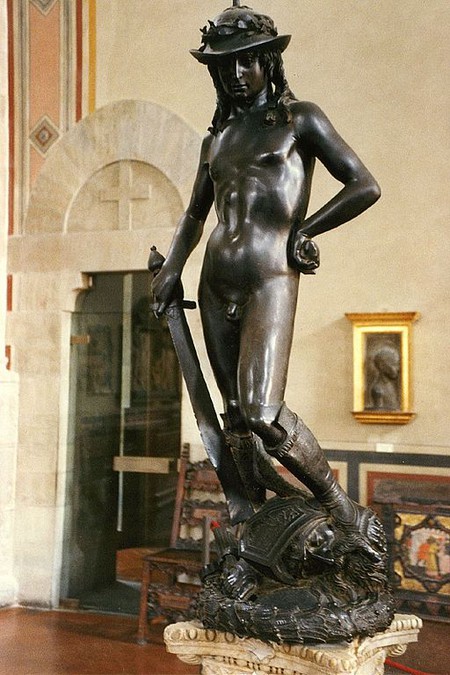 As a Dominican brother, Fra Angelico’s specialty was, indeed, religious art, and he was known as being on top of all the latest Renaissance styles, incorporating them into his artwork. One of these artworks, a fresco, can be found at the Monastery of San Marco – his frescoes are actually all throughout the convent. Depicting the Annunciation, or the moment when the angel Gabriel appears to the Virgin Mary telling her that she is with child, the artwork, although simple in its rendering, is beautiful, especially when the natural light floods through the window of the staircase, located left of the painting – something the artist kept in mind when painting the fresco. 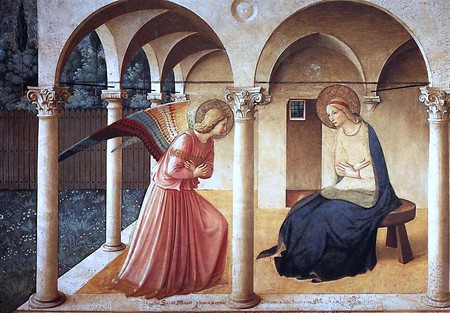 A contemporary of Masaccio, Piero della Francesca was very much inspired by him. One of the first artists to use one-point perspective, along with Masaccio, Piero della Francesca’s Flagellation of the Christ is an excellent example of this. Even though the title clearly refers to the flagellation of Christ, that particular scene is relegated to the background, while the main attraction is the group of men in the foreground on the right side – it’s almost as if it is two separate paintings, which is something that experts are still perplexed about. That aside, the men are rendered remarkably lifelike with separate expressions and individual features. This painting – oil and tempura on wood – is located at the Galleria Nazionale delle Marche in Urbino. 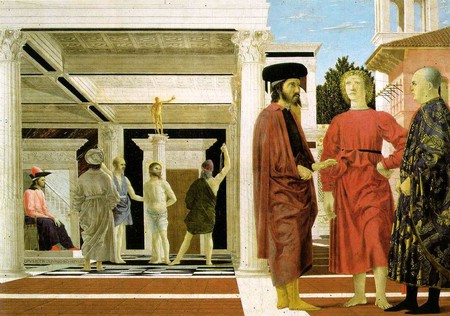 Starting out in the studio of Fra Angelico, Benozzo Gozzoli also worked in Umbria and Rome, ultimately returning to Florence where he painted a series of frescoes in the chapel of the Palazzo Medici. One such fresco is the Procession of the Magi, which is a colorful, intricate piece of art that is brimming with great detail – most likely influenced by the Northern Renaissance artists. The fresco features a lot of natural elements such as trees and hills, architecture, animals, and numerous figures, many of which have been identified, making them actual portraits, including a possible portrait of Lorenzo il Magnifico and his older brother, Giuliano. 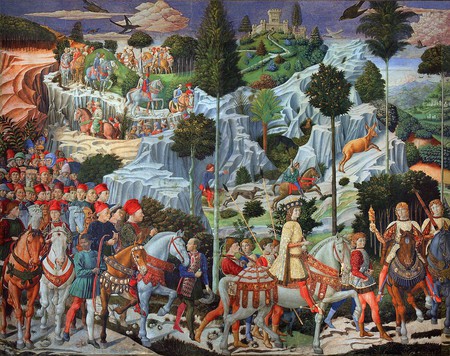 Located in the National Gallery in London, St. George and the Dragon by Paolo Uccello is an unusual yet fascinating artwork painted most likely in 1470 or thereabouts. Oil on canvas, the painting combines two scenes into one: St. George slaying the plague-stricken dragon, preventing it from harming the city any further, and the princess, who was now rescued, having the dragon on a leash, which was fashioned out of her belt. Uccello, like many of the artists at this time, was very much interested in perspective and used many tricks like the angle of the lance and the dragon’s wings to draw and guide the viewer’s eyes. 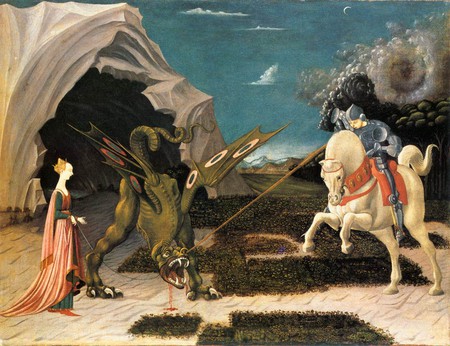 Flemish artists were known for their attention to every little detail, including little strands of hair, and Antonello da Messina was very much inspired by this style, which is evident in St. Jerome in the Study from around 1474. In fact, some records even have Flemish painters Van Eyck or Memling as the artist. A beautiful painting brimming with tremendous detail down to cracks in the tile floor, the painstaking technical ability Antonello exhibits in this piece is truly astonishing. As the title dictates, the painting shows St. Jerome in his study as was often the case since he translated the Bible into Latin, known as the Vulgate. Antonello’s artwork can be seen at the National Gallery in London. 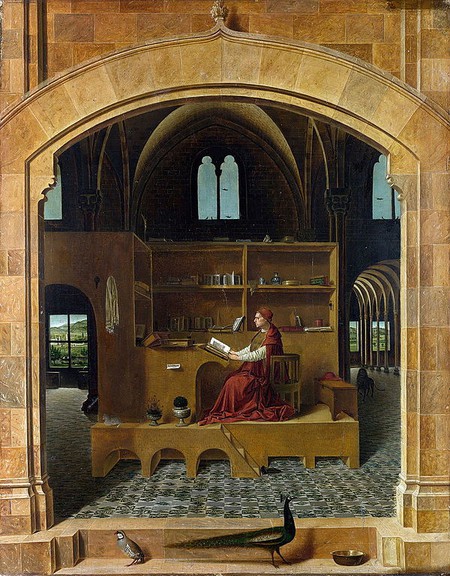 An allegorical painting, La Primavera, often referred to as the Allegory of Spring, is beautifully rendered with great detail – hundreds of flowers have been identified in the artwork. Painted by Sandro Botticelli, the painting was commissioned by Lorenzo di Pierfrancesco de’ Medici, who was the cousin of Lorenzo the Magnificent. The painting features various figures beginning with Zephyrus (the wind god) on the right side, grabbing one of the virgin nymphs, Chloris, who then turns into Flora, the figure dressed in the embroidered garb gently tossing flower petals around. We then have the central figure of Venus, followed by the Three Graces and then Mercury. It’s a fascinating piece with many theories, and it can be viewed at the Uffizi Gallery in Florence.

Another artist greatly influenced by the Northern Renaissance painters, Andrea Mantegna’s style combined elements of both the Northern Renaissance and Italian styles. The Lamentation over the Dead Christ, also known simply as Dead Christ and even Foreshortened Christ, was painted in 1480 and shows the combination of both Northern and Italian stylistic tendencies. The emphasis placed on the deadness of Christ, complete with visible wounds, is Northern European in style, while the foreshortening mostly likely came from his time spent in Florence. See this one in person at the Brera Gallery in Milan. 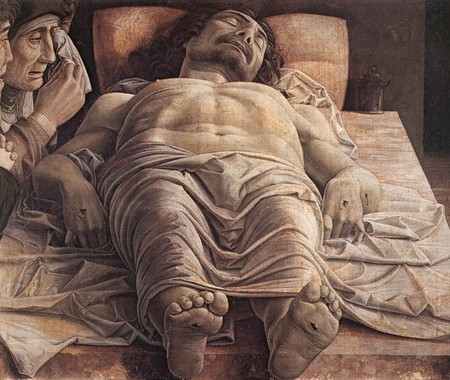 Another painting depicting mythological subject matter, Botticelli’s Birth of Venus of 1484-86 features Venus entering the world on an oyster shell. Front and center, she is the star of this painting, with Flora making an appearance by offering her a drape to cover up, seeing as she is nude. Also created for the Medici family (that’s the general consensus), the painting is quite fascinating in that it’s painted on canvas, which was rare at the time (it was usually on panel), leading some experts to believe that it might have been a ceremonial banner of some sort. Like La Primavera, this artwork is also located in the Uffizi Gallery. 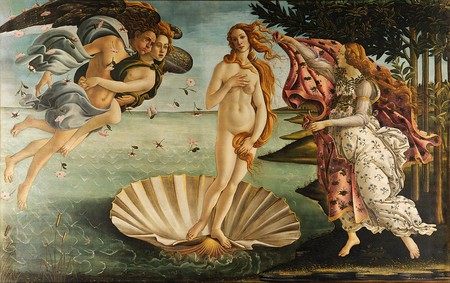 Sandro Botticelli, Birth of Venus, 1484-86 | © Uffizi Gallery/WikiCommons
Give us feedback