The Best Affordable Hotels in Milan 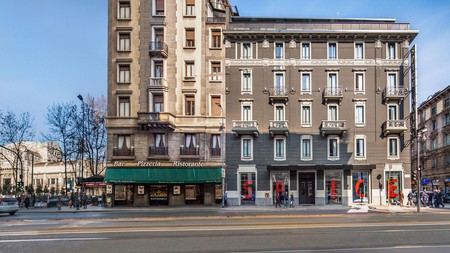 Milan is known as a place of luxury – from its annual fashion week, which hosts the likes of Prada and Valentino, to its furniture and design fair, the largest of its kind in the world. But it can be experienced on a budget too, and that doesn’t have to mean skimping on style. These are the best wallet-friendly hotels in Milan. 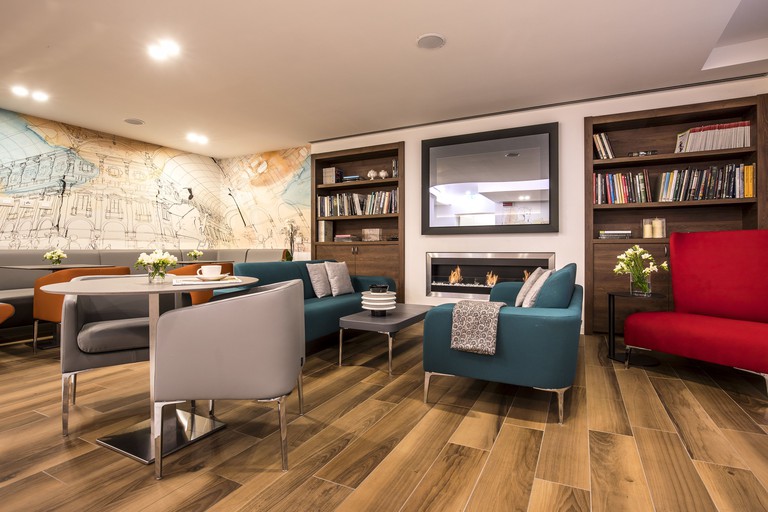 Courtesy of 43 Station Hotel / Expedia
View Rooms
A stone’s throw from the Milano Centrale railway station, the city’s primary travel hub and remnant of Mussolini’s imprint on the city’s architecture, 43 Station Hotel is about as well connected as it gets. Functionality and sustainability are at the heart of this hotel’s design, which has been custom-built by local artisans, interior designers and engineers. Each of the hotel’s 66 rooms comes complete with complimentary vegan-friendly Anyah toiletries, plus its fast and free Wi-Fi means you can connect up to five of your devices at the same time.
More info 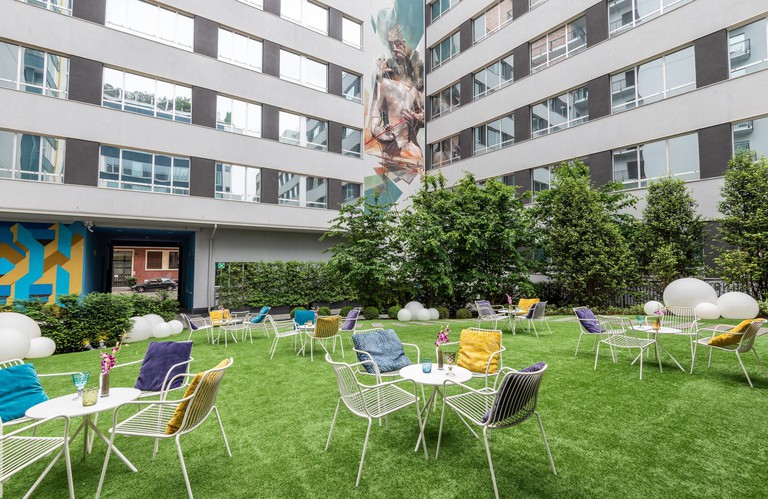 Courtesy of NYX Hotel Milan / Expedia
View Rooms
Milan is known for its art and NYX Hotel Milan is a place that celebrates it. The hotel is a throwback to a bygone era of Art Deco cinema, featuring works from local artists across its 299 modern rooms. Location is a bonus here, too, since the La Scala opera house and Milan’s Golden Triangle are just a short walk away. Enjoy its on-demand beauty services, like manicures and massages, when you’ve got time to spare.
More info 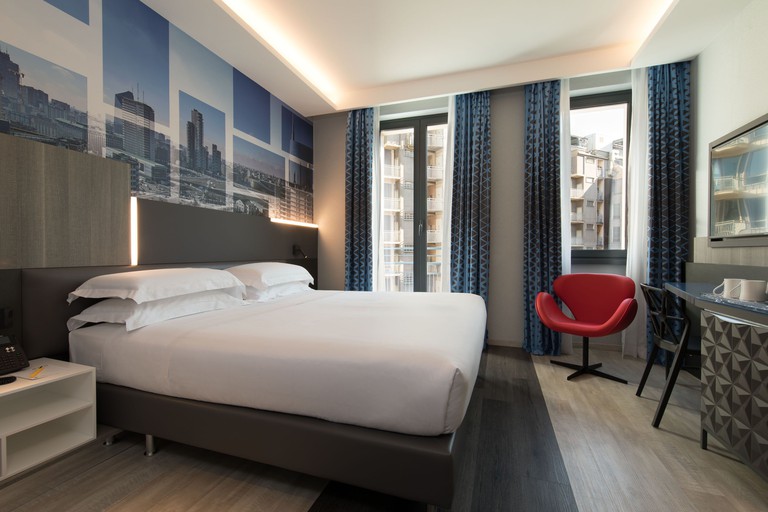 Courtesy of iQ Hotel Milano / Expedia
View Rooms
The iQ hotel chain is known for quality and generous buffet breakfasts and its Milan location is no different. In the city for work? Its sleek rooms are fit with desks, while it’s also well-linked if you need to dart around the city for meetings, as the Milano Centrale railway station is opposite. Back at the hotel, its wellness area – complete with an ice cascade – allows you to fully unwind and rest.
More info 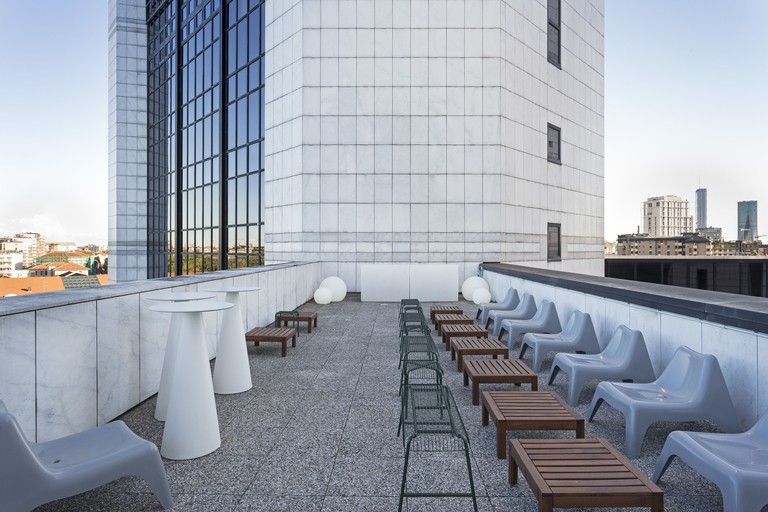 Courtesy of B and B Hotel Milano Cenisio Garibaldi / Expedia
View Rooms
Situated in a contemporary multi-storey building, a few kilometres from the city centre, Hotel Milano Cenisio Garibaldi is a strategic base from which to explore Milan. Fancy experiencing the city by bike? The hotel has very reasonably priced rentals. Convenience carries on throughout the hotel – bring your pets along for the stay, stock up on snacks from the small shop downstairs and enjoy a late check-out time at midday.
More info 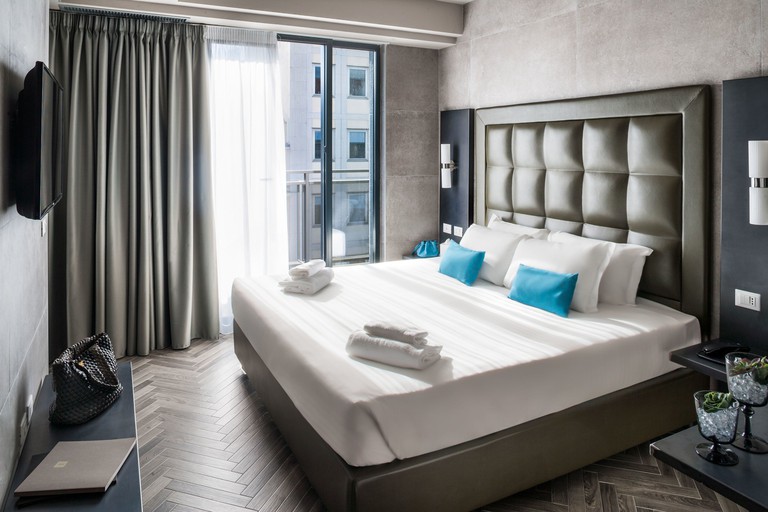 Courtesy of Spice Hotel Milano / Expedia
View Rooms
You’re in good hands at Spice Hotel, which is situated just minutes from the main station and the MM2 and MM3 subways. Their front desk is open around the clock – although you can forgo waiting around with a digital check-in on arrival – and they offer airport and shuttle bus transfers, as well as a laundry service for an extra fee. The continental breakfast buffet is free, and rooms come in a range from singles to deluxe quadruples.
More info 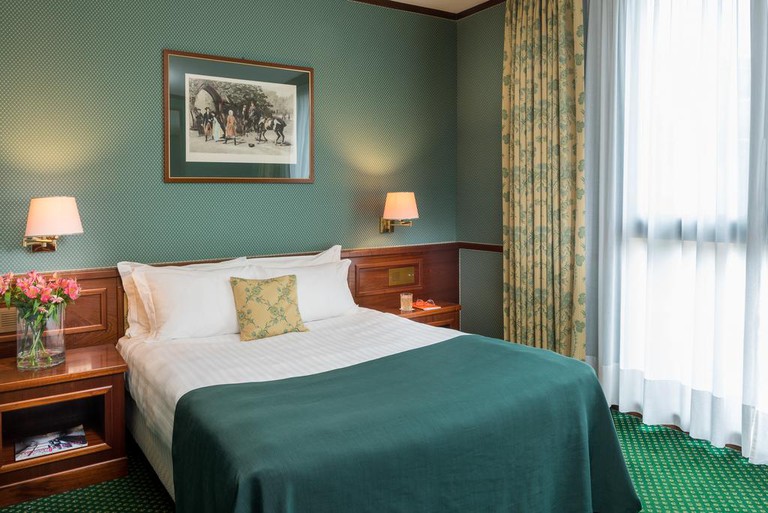 Courtesy of Leonardo Hotel Milan City Center / Expedia
View Rooms
Despite its name and convenient location, this hotel feels far removed from the hectic streets of Milan’s city centre, sitting between Corso Sempione and Porta Garibaldi. Leonardo Hotel Milan City Center does a good job of catering to all sorts of travellers – kids can enjoy an itinerary dedicated to children’s activities, those on business trips can dial into meetings from the Business Centre’s conference room, while parking spaces and a shuttle bus service make reaching the hotel a fuss-free affair. Enjoy dining in its traditional restaurant, Il Giorno Bistrot, where must-trys include melt-in-the-mouth fillet of beef with brandy mustard sauce.
More info 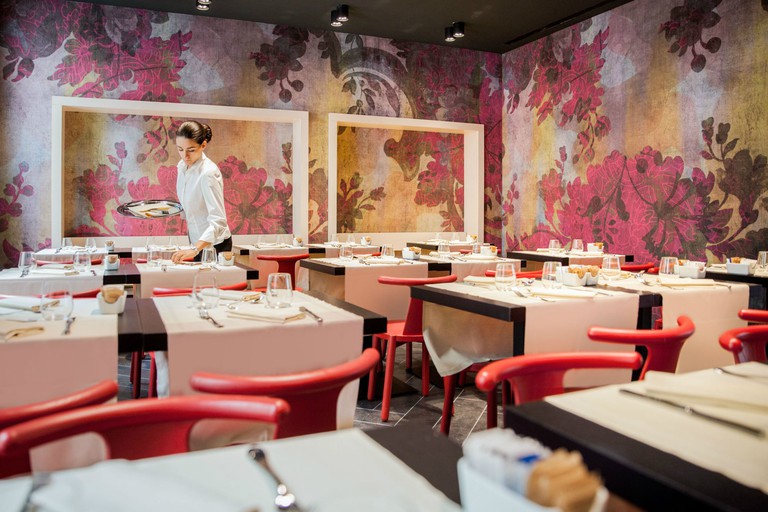 Courtesy of Glam Hotel Milano / Expedia
View Rooms
Situated in the thick of it – the Milano Centrale Station is under five minutes away – you’d expect Glam Hotel Milano to have its fair share of noise pollution. Yet, this isn’t the case, thanks to the hotel’s effective soundproof rooms. Refuel on a free breakfast after a peaceful sleep, and relax in its shared lounge and TV area before heading out to explore the city’s nearby sights.
More info 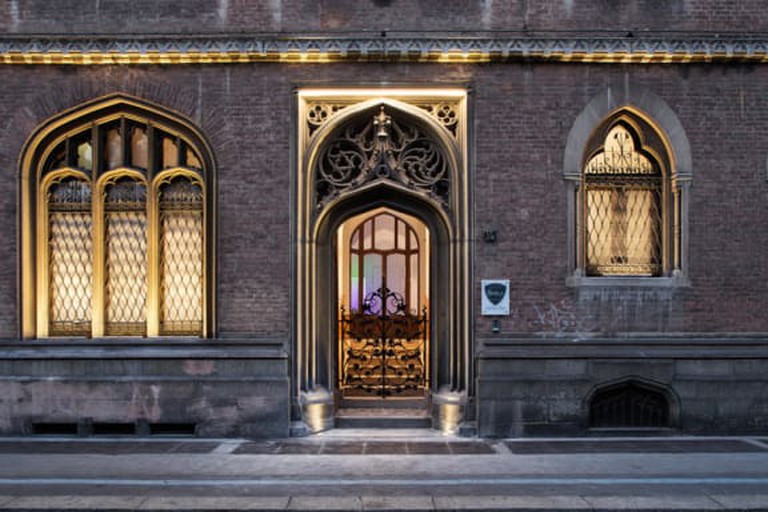 Courtesy of Babila Hostel and Bistrot / Hostelworld
View Rooms
Formerly a Catholic school, the neo-Gothic building that Babila Hostel occupies has existed in central Milan since 1895. Its heritage goes way back, but it’s well up to speed when it comes to all things sustainability. With a mission to reduce environmental impact, bathrooms are fit with soap dispensers, and you won’t find plastic straws at its lively bar. Heading out to explore the area? Don’t expect a paper map – the hotel has partnered with a sustainable supplier to create a digital guide.
More info
Give us feedback