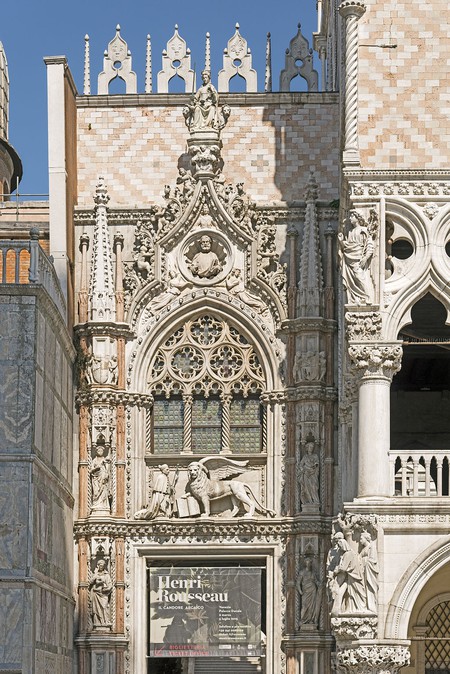 Venice is an architectural melting pot. For many centuries, it was the center of trade routes that ran between Western Europe and the Ottoman Empire and was home to a wide mix of merchants and traders from all over Europe and Northern Africa. Its earliest churches were built in the Byzantine style, such as the Basilica di San Marco. The domed church is full of glittering mosaics, colors and ornamentation, with elements that were literally stolen from Constantinople.

The Gothic style entered this potent mix in the 14th and 15th centuries, in an era of great affluence. Venetians were building showy public buildings as well as opulent family homes, and the unique style known today as Venetian Gothic emerged. Nobody appreciated the style more than the British art critic John Ruskin. His treatise, The Stones of Venice, is a love letter to this unique architectural legacy.

The name Venetian Gothic itself is a bit misleading, because Venice never really adopted many key features of Gothic architecture. This was in part due to the technical considerations of constructing on water. Venice is built on a bog, so the ground is muddy and unstable. Building materials had to be light and flexible, so that they didn’t weigh too heavily on the foundations and could take a bit of shifting or sagging. Most buildings, and even most churches are built in brick, with foundations laid in wood. That means that the kind of weight-bearing stone structures we see in other places just wasn’t possible here here. However, the wild ornamentation and the emphasis on light definitely fit into the Venetian aesthetic.

The Gothic style was first brought over by Franciscan monks, who came to Venice through the mainland. Santa Maria Gloriosa dei Frari was the first example of that style in Venice and it’s evident that they had to make many accommodations. The church’s high brick walls and vaulted structure weren’t stable without a brace that ran across the middle of the church. They also weren’t able to open up the solid brick walls with the lacy, skeletal windows that Gothic churches are known for. In spite of shirking all these conventions, the building is beautiful, merging Gothic ideas with the practical necessities of lagoon-side construction. San Giovanni e Paolo and Madonna dell’Orto are two other churches that take on the same kind of style. 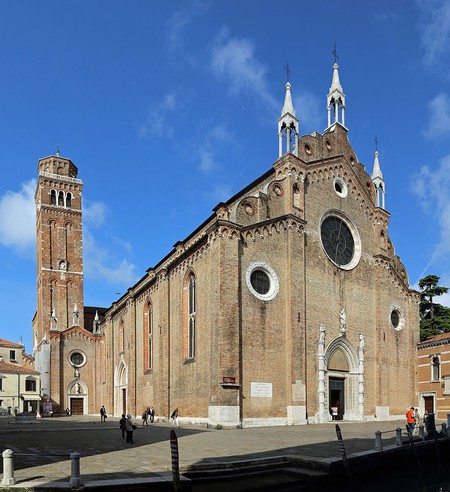 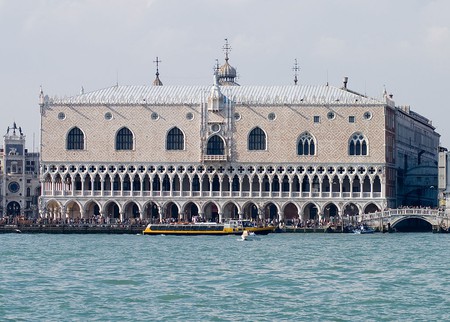 The Doge’s Palace is an icon of Venice’s hybrid style, mixing Byzantine quatrefoil arches on the second level with the pointed Gothic arch on the ground floor. The building we see today dates back to 1340, but some aspects of the building were constructed a century later, at the height of Gothic influence in Venice. The Porta della Carta, or Paper Gate, is the extraordinary ceremonial entryway of the building, designed by the brothers Bartolomeo and Giovanni Bon. The intricately sculpted pinnacles and pointed archway are full of Venetian state iconography. In the central frieze over the door, the doge, Francesco Foscari, kneels before the winged lion, a symbol of the Republic.

The same brothers Bon were the designers of one of the most famous palazzi in Venice, the Ca’ d’Oro. The building’s name means “house of gold,” because the house was originally covered in actual gold. The original owners were the Contarini, an extremely powerful and rich family. The family adorned the front of the mansion with gold leaf and other precious materials, even though they knew that it would flake off very quickly. It was a gesture of extravagance, spending money on something utterly impractical and superfluous. 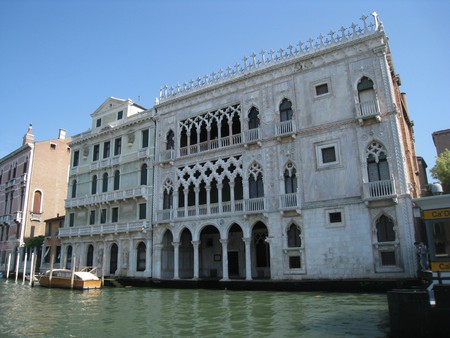 The building itself is a perfect example of the classic Venetian palace, with its main facade looking not towards the street, but to the Grand Canal, where visitors would arrive by boat. The front of the palace was full of windows and balconies in order to bring in as much light and air as possible, as the other three sides of the palace were shaded by narrow, crowded alleys.

You can also read something about the diversity of Venetian life in the arches on the front of the palace. There’s the quatrefoil arch, lifted like a quotation from the Doge’s Palace. There’s the Moorish inflected arch on the top floor, bringing in an Andalusian influence and there’s the Gothic arch along the ground floor entrance. Countless other palaces around the city follow this general model, lifting influences from over Venice’s trading empire to create that unique style known as Venetian Gothic.