A Style Guide To Roberto Cavalli

Roberto Cavalli is best known for being one of the most renowned Italian designers for his eponymous label of luxury clothing, perfume and accessories, but did you he is also an inventor with a patented printing procedure? Read on to learn about the man behind the Roberto Cavalli line, his stylistic vision and his contribution to the fashion world.

How do you identify a Roberto Cavalli design?

Roberto Cavalli is best known for dressing his models in decorative and intricate prints that draw their inspiration from different decades, countries and traditions. From Navajo and Apache prints to jacquard stripes and paisley that pay a nod to the 1970s rock scene, Cavalli breathes new life into well loved aesthetics and makes the old new again. The motifs are often very ornamental and colorful, and always complement, rather than compete with, the silhouette of each piece. He is a fan of flowers, animal prints and ethnic designs which he transfers effortlessly onto his clothes for a truly decadent air to his looks. The designer is also a fan of embroidery and sequins, adding an extra touch of romance and fine craftsmanship to each frock.

Cavalli’s flamboyant prints are expertly tailored onto a variety of silhouettes, cuts and fabrics that fluidly enhance the female form for an ultra-glamorous look. Although Cavalli’s styles are undeniably sexy and alluring, they are often free flowing and voluminous to achieve subtle, feminine elegance. His floating gowns often feature ruffles, lace and embroidered elements that demonstrate the careful attention and high quality of each piece; accents such as beads, pearls and metallic stitching just add to the decadence of each item. No matter how risqué his clothes may be (he loves to experiment with barely-there cuts and transparent fabrics), he is a master at rendering each piece tasteful, wearable and extremely covetable.

It seems that most designers flirt with the punk rock style to add some edge to their designs. Although Cavalli’s clothes are effusively elegant, they are also contemporary and daring: red leather trousers, fuchsia and black tiger-striped shirts, and acid-washed biker jackets have all made an appearance in recent collections. His black taffeta ruffled skirts and dresses perfectly capture the Cavalli dichotomy of sensuality and rebellion in one piece and demonstrate the genius of the designer’s vision.

How did Roberto Cavalli get into fashion? Cavalli’s grandfather, Giuseppe Rossi, was a painter and member of the Macchiaioli, an impressionist movement in Tuscany during the mid 19th century that probably stimulated Roberto’s aesthetic senses. Cavalli enrolled at the Arts Institute of Florence and concentrated on textile prints. As a student he worked on a number of flower prints on knit fabrics that attracted the attention of important Italian hosiery factories.

What did Roberto Cavalli patent? In the 1970s, Cavalli invented and patented a revolutionary printing technique on leather and begin to experiment with different materials. When he introduced these techniques in Paris, he attracted attention from established luxury houses such as Hermès and Pierre Cardin and shortly thereafter presented his first collection at the Prêt-à-Porter fashion show at the age of 32. 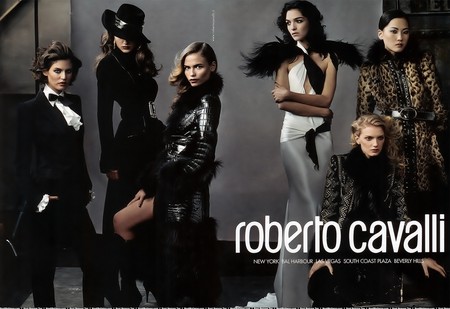 ‘My devotion to my job started from a personal defeat: my first girlfriend’s parents rejected me because I wasn’t rich. I decided I would show them what a big mistake they had made.’

‘Sometimes women are afraid to be sexy and women should know that sometimes a dress can change her life.’

‘I copy the dress of an animal because I love to copy God. I think God is the most fantastic designer.’

‘Sometimes incompetence is useful. It helps you keep an open mind.’

‘I really don’t understand minimalism. It is so polite and boring. If you don’t want anyone to notice you, you should stay home and grow your own vegetables.’