A Style Guide To Donatella Versace

Donatella Versace is an Italian fashion designer, vice president of the Versace Group and its main designer, meaning her vision penetrates every aspect of the company, from its philosophy to its clothes. The Versace Group was founded by his brother Gianni Versace in 1978, but she took over at its helm following his untimely death in 1997. Donatella is not just famous for her designs; she is also a pop culture icon and well known for her elite entourage. Learn about this world-famous brand, the history behind its family and its enduring legacy in the fashion industry. 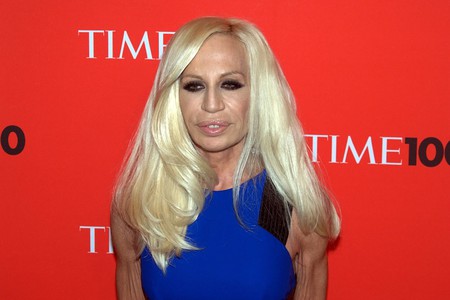 How do you identify a Donatella Versace design?

Versace tops many lists of most iconic dresses for its celebration of the female form. Elizabeth Hurley wore a revealing safety-pin gown in 1994, which launched both herself and the Versace brand to stardom. Jennifer Lopez wore a plunging turquoise dress to the 42nd Grammy Awards ceremony in 2000, and Angelina Jolie’s seductively extended leg at the 84th Annual Academy Awards in 2012 accentuated the gown’s sex appeal. From figure-flattering designs and exaggerated proportions, the Versace style has always been decadent, bold and sultry. Building upon her brother Gianni’s design philosophy in keeping the empowered woman as a central facet of the brand, Donatella still designs her clothes to highlight the woman’s body, but has also incorporated more architectural elements into the clothes, lending a more futuristic look to the line in the last decades.

The Versace name was born as an audacious and unapologetic brand, fusing street style with high fashion to create bombastic, avant-garde designs. Versace is well known for mixing mediums such as metal, mesh and leather, often painted in bright, almost jarring colors. Black leather, flashy golden jewels, bomber jackets and zippers show up often, paying a nod to the rock-and-roll aesthetic and neo-punk vibe. This rock influence has not least been underlined by Donatella Versace’s friendships with celebrities such as Madonna, Elton John and Bruce Springsteen. She admits that she is passionate about music, and listens to it ‘continuously, all day long.’

@ladygaga is flawless in Atelier Versace at the 2016 Met Gala. #VersaceCelebrities

The iconic Medusa logo is a perfect metaphor for the Versace brand’s style and core philosophy, which is empowered and seductive. According to the ancient Greek myth, looking into the eyes of Medusa would turn you into stone and her snake head of hair added to her intimidating aura. Gianni Versace chose this symbol because he wanted to empower women with his bold, sleek clothes that would render a woman ultra confident and able to manipulate the male gaze. The logo naturally appears on many Versace accessories, from sunglasses to scarves, but is increasingly making an appearance as a pattern on its clothes. In Versace’s Fall/Winter 2016 collection, an oversized Medusa icon pops up on mini-dresses, shirts, and even undergarments.

Where was Donatella Versace born?

Donatella Versace was born in Reggio di Calabria on May 2nd, 1955.

How did Donatella get involved in fashion?

Donatella’s mother was a dressmaker, which inspired both her and her elder brother Gianni to pursue fashion. Gianni Versace moved to Milan when he was 26 to work in fashion design. Donatella followed her brother, serving as his muse and adviser, and he dedicated a perfume to her (Blonde) and gave her her own label (Versus).

Donatella took on a larger role in the Versace Group when Gianni was murdered by a serial killer in 1997. She was the Chief Executive Officer of Versace from 1997 to 2004 and has been Creative Director since 1997.

Who are Donatella’s closest friends?

Donatella is known for her celebrity entourage and for throwing rambunctious parties. Some of her most notable friends include Lady Gaga, Sir Elton John, Liz Hurley, Jennifer Lopez, Courtney Love, Rakeem Young, Catherine Zeta-Jones and Kate Moss, though the list is a long one.

What are the different Versace lines?

Versace has a wide range of fashion offerings from haute couture to ready-to-wear styles. Its different lines include the Atelier Versace line, Versus Versace, and Versace Accessories, which include watches, shoes, handbags and eyewear. It also produces fragrances, luxury home furnishings, and has even broken into real estate with the development of the Palazzo Versace hotel in Dubai. 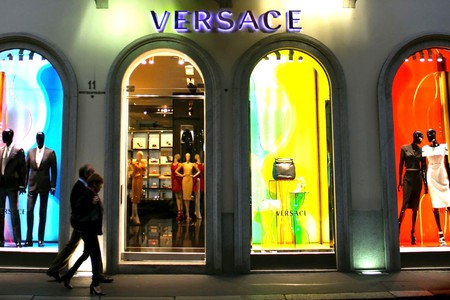 ‘My style is not that big. I wear heels, tight pants, and I wear diamonds.’

‘You have to renew yourself, because tomorrow is what matters in fashion. Today is already old.’

‘I don’t like balance. Balance is not a word you can use in Versace fashion.’

‘You can be too boring, but you can never be too seductive.’

‘My main influence is – it’s music. It lifts the spirit. I am always listening to music. And sometimes what inspires me is a little sound or some small arrangement. I really do listen to music continuously all day long – very loud, so people can’t stand to be around me anymore.’ 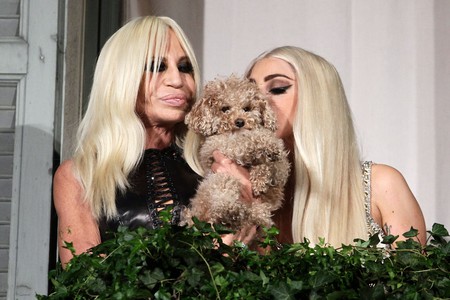 Donatella Versace and Lady Gaga | © Flickr/celebrityabc
Give us feedback