A Guide to the Masks of Venice

The original function of masks in Venice was both practical and aspirational: a person in a mask could be who they wanted to be, and do what they wanted to do. A poor man could be a nobleman for a day. A woman could act like a man, or vice versa.

The wearing of masks in Venice is a tradition which goes back as far as the 12th century, and historians speculate that it was a response to one of the most rigid class structures in all of Europe. Eventually the wearing of masks was so ubiquitous that the government had to pass laws restricting it to the Carnival season. Walking around Venice nowadays, you’ll see many types of masks, ranging from the simple to extraordinarily decorative art pieces. They mainly fall into two categories: the traditional masks worn during Carnival, and the Commedia dell’arte character masks.

This is a simple, white mask with a square jawline that projects out over the mouth. This allowed the wearer to eat and drink, as well as having the effect of distorting the wearer’s voice. It is part of a whole costume, worn with a tricorn hat and a cape, that would entirely hide the wearer’s identity, so that women could enter male-dominated settings and the poor could mix with nobles at fancy dress parties. In the 18th century, it actually became a standardized mask for political decision-making events, to guarantee anonymity when participating in ballots. The volto is a variation on this mask that covers the entire face including the mouth. 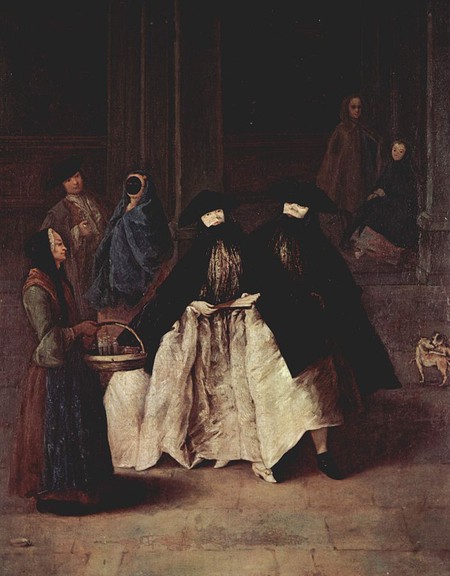 The plague ravaged Venice many times, and this beaked mask was used as a sanitary precaution by actual doctors. The long nose would hold herbs and flowers that would filter the air and cover up the horrible smells of plague victims. It’s usually worn with a long black coat, white gloves, and a staff to complete the plague doctor uniform. 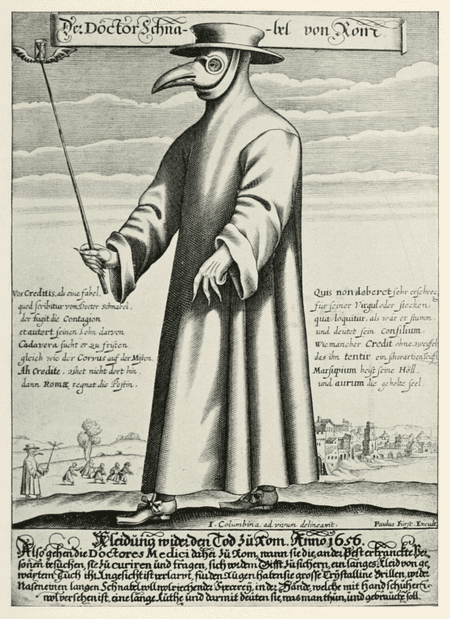 This black strapless mask is a perfect oval shape with holes only for the eyes, and was usually worn by women. It’s held in place by the wearer biting on a button on the inside, so the person wouldn’t be able to speak without removing the mask. It didn’t entirely hide the wearer’s face, but it did limit his or her social interaction in an interesting way, creating an aura of mystery around whoever wore it. 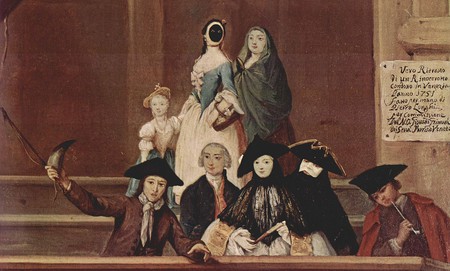 One of the most fascinating stories in Venetian history is behind the cat mask. It was part of a costume worn by men disguising themselves as women – the original drag queens of the Venetian Republic. The costume also required the wearer to carry a basket filled with little kittens and to mock passers-by with coarse language. Homosexuality was punishable by death in those times, but this mask was part of a little loophole in Venice’s laws. If you wore a mask, you had to act in accordance with the mask, which allowed male wearers to enact heterosexual relationships with other men. However, female prostitutes saw a decline in their business due to the popularity of the Gnaghe with their client base, and appealed to the bishop, Antonio Contarini. To counteract the appeal of the masks, Contarini allowed prostitutes to lean out of their windows with their breasts on display, a practice that left us with such interesting names as Ponte delle Tette (Bridge of Breasts) and Fondamenta delle Tette (Street of Breasts).

This mask covers only half the face, and is either tied with a ribbon or held up with a baton. Named after the eponymous character in the Commedia dell’arte, it is sometimes also called arlecchina. She was a servant, but often the cleverest person onstage. 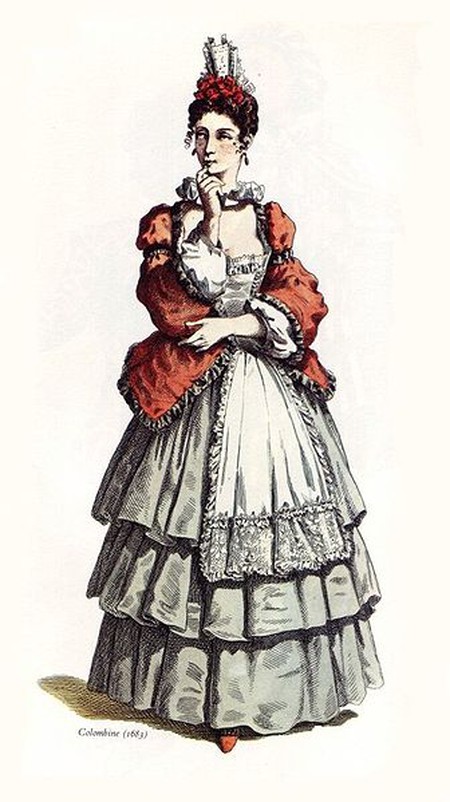 The arlecchino, or harlequin, is the male counterpart of the arlecchina. He typically wears a half-mask with with a short nose and wide, arching eyebrows. His character is a comic servant, dressed in clothes full of patches and rags that evolved into the colorful patterns we associate harlequins with today. His forefather was the Zanni mask, who is a country peasant or porter, constantly hungry, forced to swindle his way through life. 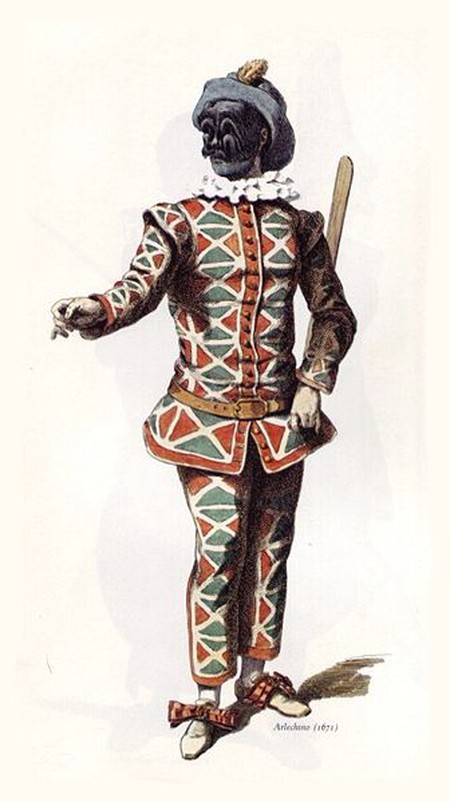 This character is a poor hunchback man who’s always down on his luck, sometimes drunk, and always getting into trouble. The mask has a beak-like nose, typically worn with a long white coat and straggly hair. 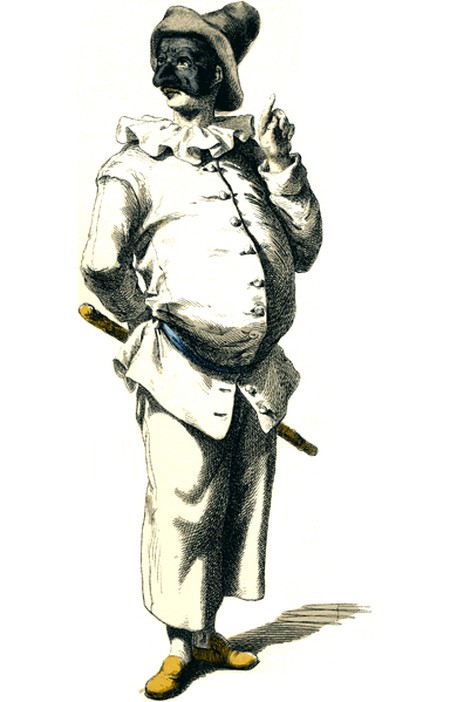 Pantalone is an old man whose mask has a a beaked nose and heavy eyebrows. He is usually a shopkeeper from the city, fond of food and pretty women, miserly, gullible, and the butt of all the jokes. 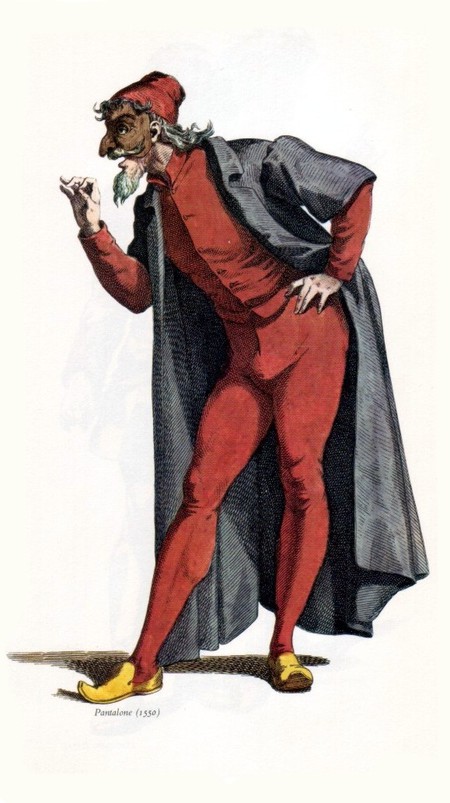 This character has a beloved history not just in Commedia dell’arte, but also in French theater and modernist art circles. He represents the sad clown, who usually pines for Colombina, though she will inevitably break his heart. He wears a white tunic that has wide sleeves and legs, and his mask is also painted white, sometimes with a black tear. 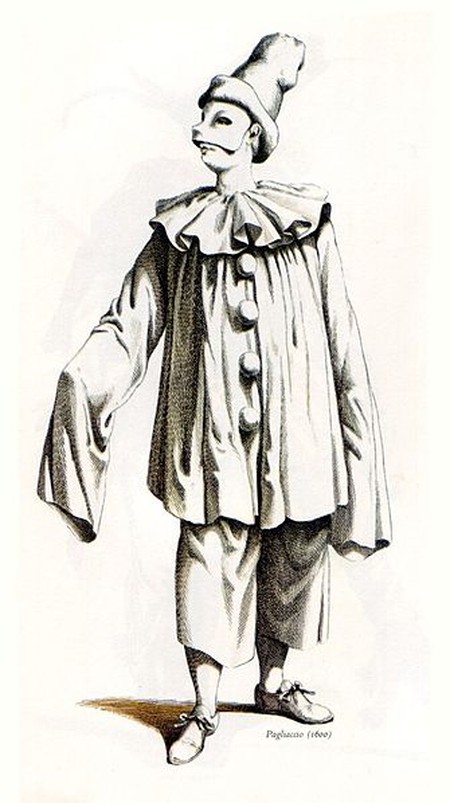 Pierrot | Maurice Sand/WikiCommons
Give us feedback