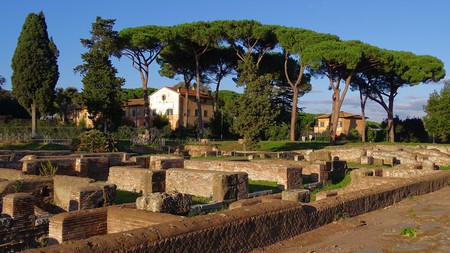 Thought to be the first Roman colony, Ostia Antica was the harbour city of ancient Rome and is noted for its impressive mosaics, frescoes and well-preserved ruins, which give a glimpse into how life was 2000 years ago. Often nicknamed ‘the poor man’s Pompei’, Ostia Antica is the perfect choice for an easy day trip from Rome and remains wonderfully quiet, even in high season. Here is a guide to one of Rome’s most underated treasures.

Rome conquered the nearby Etruscan town of Veio in the 4th century BC and developed it into a militiary base named Ostia, from the Latin ‘ostium’ meaning ‘river mouth’. As the strength of Rome grew, Ostia’s strategic position at the mouth of the Tiber saw it transform into a port town and commercial base for goods and foodstuffs, in particular wheat and grain, being shipped up the river to Rome. As the empire expanded, Ostia thrived and by the end of the 2nd century AD it had reached its maximum population of approximately 50,000, necessitating the construction of more residential and social spaces alongside the warehouses and functional buildings.

By the middle of 3rd century AD the beginning of the decline of the empire was also having its effect on Ostia and slowly the town was abandoned due not only to frequent plundering and invasions by Arab pirates, but also to the increase of malaria and sickness. The town was completely abandoned in the 9th century AD. Later, artists, architects and explorers continually plundered the empty city for marble, materials and artifacts which were used for construction work in Rome and beyond or placed into private collections.

Over the centuries, much of the town was buried as mud built up along the coastline, ultimately moving Ostia three kilometres inland from the sea and helping to preserve many of the buildings and decorations visible today. The first studies of the area began at the beginning of the 20th century with many excavations instigated by Mussolini in the 1930s. After World War II, the city continued to be slowly unearthed and nowadays it is estimated that about two-thirds of the ancient city have been revealed. 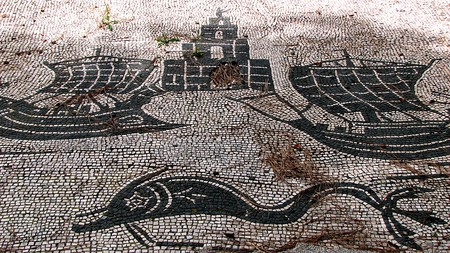 The site of Ostia Antica sprawls over 10,000 acres so it is recommended that you arm yourself with an audioguide, guidebook or map of the ruins before setting off to explore. The Forum, or main square, still shows the remains of the immense Capitolium temple. Look out for the well-preserved insulae, or apartment buildings, as well as the aristocratic villas, such as the House of Cupid and Psyche, which boasts elaborate marble decorations. The ancient brick theatre of Ostia is still used for concerts and performances in the summer and the nearby Piazza delle Corporazioni, which was the heart of the town’s commercial business, showcases some of the site’s best mosaics. There are two bathhouses, the social centre of the city which also house stunning mosaics, as well as the ancient docks and warehouses, shops and even public latrines. Don’t miss a trip to the small museum which contains many of the artifacts discovered during the excavations such as sculpture and statues. Near the museum there is also a small bar-cafeteria for drinks and snacks. 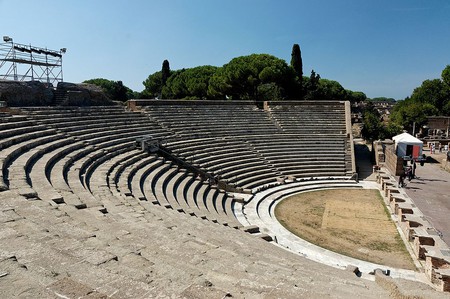 Ostia Antica is located about 19 kilometres south-east of Rome, just a little way before reaching the beach town of Ostia. The easiest way to reach the archaeological site from the city centre is to hop on the Roma-Lido commuter train which leaves from Piramide metro station on the blue B line. The trains run every 10-15 minutes and takes about 30 minutes to arrive at the Ostia Antica stop. The site is a five minute walk away. 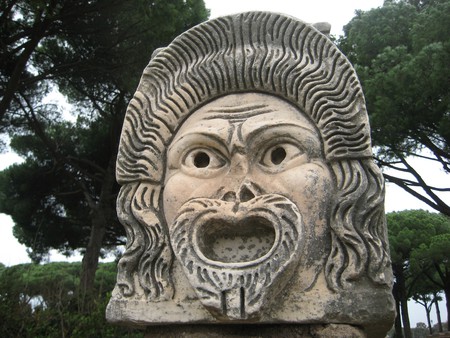 Ostia Antica is open throughout the year every day except Monday and the entrance ticket costs €8 (€4 concessions, free for under 18s). On the first Sunday of each month, the site is open for free. It is an ideal destination in the warmer, high-season months when Rome is crowded and hot. A visit to Ostia Antica in the summer can also be combined with a trip to the nearby beach resort of Ostia by taking the same train onwards to the Ostia Lido stop.