A Design Lover’s Guide to Milan in a Day 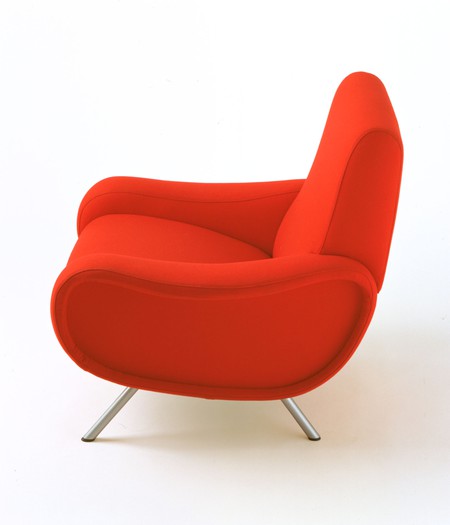 As host of Salone Internazionale del Mobile and synonymous with historical figures such as Gio Ponti and Piero Fornasetti, Milan is an internationally renowned centre of design. Here are key addresses for design enthusiasts with limited time in the city. Pick from the best design-focused museums, showrooms and restaurants.

The Permanent Collection of Italian Design at the Triennale Design Museum

The Design Museum at contemporary culture space Milan Triennale, pays tribute to icons of 20th- and 21st-century Italian design in its permanent collection. The assemblage of objects (as varied as a 1950 Galletto 160 CC motorbike to a 1967 Artemide lamp) is a testament to the innovation and flair of the nation’s creative minds, as well as mapping cultural and industrial changes in the country.

The house museums of Milan are a network of four former private residences of major Milanese art patrons. Pairing art and design in an intimate setting, the house museums are the ultimate aesthete destination. Whats more, the individual narratives of the patrons provides insight into the social and political history of the city. They are located within walking distance of one another, so you can decide whether you have time to see just one or all of them.

Originally, this was the home of spouses Antonio Boschi (1896–1988) and Marieda Di Stefano (1901–1968). The couple were enthusiasts of 20th-century Italian art, and during their lifetime, amassed a collection of over 2,000 paintings, drawings and sculptures, which they generously donated to the City of Milan in 1974. A selection of 300 works, which traces modern Italian art history from the 1900s until the 1960s, is beautifully hung in true salon style, among period furniture inside the elegant apartment. The building was constructed at the beginning of the 1930s by Architect Piero Portaluppi and has been excellently maintained – note the original art deco door frames and glass work. You can admire an exquisite art deco cabinet next to a rare Mario Sironi painting, or an outlandish 1950s dining table designed by Gino Levi Montalcini beneath a Piero Manzoni Achrome.

This grand villa was also designed by Piero Portaluppi in the early 1930s for a Lombardian industrial family – the sisters Nedda and Gigina Necchi and Gigina’s husband Angelo Campiglio – but has a completely different atmosphere. The free-standing house is set on leafy grounds with a tennis court and swimming pool; it is opulent and indulgent. Every design detail speaks to the experimental but refined decorative taste of Portaluppi and also the modernity of the commissioning family – the layout of the villa favours large reception space for entertaining guests, which went against traditional divisions of noble residences at the time. Recently the villa has come to house some important art collections, featuring works by the likes of Tiepolo, Fontana and Modigliani, but the furniture and decorative objects take centre stage. For example, an exquisite lapis lazuli, agate and coral fish centrepiece by Alfredo Ravasco.

In the late 19th century, brothers and barons Fausto and Giuseppe Valsecchi decided to entirely restructure their family home in neo-Renaissance style and dedicate themselves to building a collection of painting and decorative art from the 14th to the 16th centuries. This thinking was in line with the cultural agenda of the current Savoy monarchy, which saw the Italian Renaissance as a symbolic reference point in their construction of a shared national Italian identity. If you time your visit to this museum with lunch or dinner, you can enjoy the beautiful interior courtyard that is now home to the restaurant Il Salumaio di Montenapoleone.

Museo Poldi Pezzoli bears the name of Gian Giacomo Poldi Pezzoli (1822–1879), an Italian count who left this home and collection of Renaissance art to the public, creating one of Italy’s first private museums. Open since 1881, this is one of the most famous house museums in the world. The neoclassical-style building close to La Scala theatre is home to an incredibly rich and diverse collection of art, antiques and interior design. For example, there is a room dedicated to Murano glass, an armoury and an ornate Renaissance studiolo.

Established in the 1990s, Nilufar Gallery has long been the ultimate destination for the cream of 20th- and 21st-century furniture. In an elegant townhouse, rare pieces by historical greats such as Italy’s Gio Ponti and Denmark’s Hans Wegner, are shown alongside newly commissioned items by leading names on the contemporary design scene, such as Martino Gamper and Bethan Laura Wood. In 2015, founder Nina Yashar opened Nilufar Depot, a vast three-storey showroom in a former silverware factory, to increase access to her exclusive collection. Here, wide, endless balconies host small interior scenes of furniture and lighting from the Nilufar inventory; it almost feels like a museum.

Rossana Orlandi is renowned for her eclectic taste and for fostering new international design talent. Located in the Magenta neighbourhood outside of the historic city centre, the two-storey converted building is set around a leafy courtyard, creating an intimate and bohemian atmosphere. The gallery showcases outstanding vintage furniture with new design and decorative arts across all genres – from a glass chair by Latvian-born, Amsterdam-based Germans Ermics, to an organic sculpture by Nacho Carbonell from Spain. There is no uniting aesthetic; rather, it is an Aladdin’s cave of avant-garde creativity.

Cult brand Studio Dimore has opened a showroom on Corso Italia. The duo behind Studio Dimore is known for period-inspired maximalism and their work can be seen at important addresses all over the world, including Fendi in London, Boglioli in New York and Hotel Saint Marc in Paris. You can spot their signature touch in many locations in Milan too: Hermès, Boglioli, Aesop and Ceresio7. The collection showroom is like a decadent wunderkammer where you can find furniture, fabric, tableware and also repurposed objet d’art.

With celebrated, Michelin-starred chef Caro Cracco at the helm, it was clear that the menu would be par excellence, but this funnily named restaurant has become renowned for its unusual and atmospheric space designed by Tanja Solci. The architecture of the former industrial sawmill has been left virtually untouched creating a lofty, cement and iron dining hall; elegant glass chandeliers and antique tableware (by Richard Ginoro) counterbalance the rawness of the space. 65 Capellini seats are set along the long, single white table that snakes through the room, meaning all guests dine together. This convivial arrangement adds to the special ambience of Caro e Camilla. On warm summer evenings, the tranquil courtyard lit with fairy lights is the perfect destination for an aperitif. 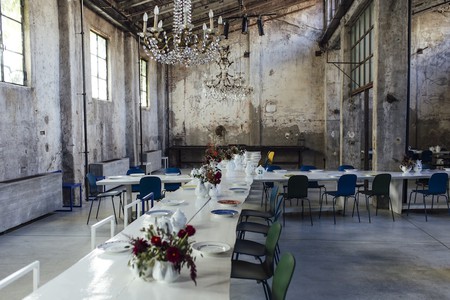 Tuscan-born chef Giacomo Bulleri, now 92, arrived in Milan in the 1950s and has built a small food empire in the city; Da Giacomo is one of his cherished restaurants. Its refined but cosy interior, designed by architects Renzo Mongiardino and Roberto Pellegrini, envokes a traditional Lombardian trattoria from the early 1900s: tiled floor and stucco mouldings, mint green wooden panelling paired with creamy yellow embossed wallpaper, classic wooden chairs and silverware. It is wonderfully nostalgic without being kitsch. The famous menu focuses on fish and seasonal specialities.

DRY (which has two locations) has a simple and effective concept: excellent Neapolitan pizza with excellent cocktails. The design of the bar-cum-restaurant is more complex. At the Viale Vittorio space, Milan/Shanghai creative studio, Vudafieri Saverino Partners, expertly channel 1960s nightclub and minimalist Japanese design to create a sophisticated and seductive environment.

IWA Spots: When in milan make sure to book a table at @drymilano , superb cocktails and great simple but contemporary served food. 2 locations that serve for different types. Our personal favourite is the pizza and cocktails in Via Solferino 33⠀⠀ .⠀⠀ .⠀⠀ .⠀⠀ Photo by: @thefoodorialist⠀⠀ #iwabrand #iwalkalone #iwaspots #wheretoeat #wheretodrink #milan #drymilano