A Brief History of the Verona Arena 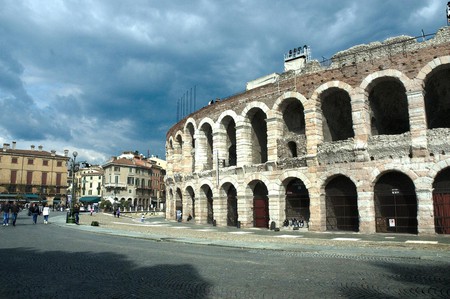 Built in the first century, the Verona Arena is an open-air Roman amphitheater that’s still fully in use today, making it one of the best-preserved ancient structures in the world. That means that these stones have seen everything from gladiator games to One Direction concerts, from medieval jousts to Puccini operas. Its colorful palimpsest of histories makes it a perfect representation of Verona itself.

The city was built up in the first stage of the Roman Empire’s expansion because of its strategic location on the river Adige. It was used as a base for controlling the northern territories, and it was at the center of many important roads. You can see the footprints of this ancient history all around the city, as Roman ruins are incorporated with nonchalance into the everyday fabric of the infrastructure. The Arena today is located in the historic center of the city, but back in Roman times it was on the border of the urban area, just outside the city’s walls. 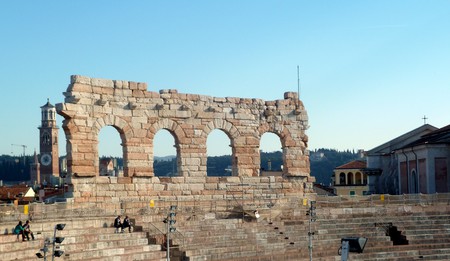 The arcades of the arena | ajy/Flickr

The Arena is made from pink and white stone from nearby Valpolicella. It originally had three tiers of arches running along the border, but only two survived. The place held over 20,000 people in its heyday, hosting festivals that would draw visitors from all over. It was a complex and demanding entertainment industry, powered by the labor of hundreds of slaves in the underground tunnels. Grandiose stage sets would be erected in the central space. The elliptical shape gives the space excellent acoustics.

There were processions, circus acts, dancing and music, but, above all, the citizens came to see blood sports. Fierce wild animals from faraway places in the empire were brought in to be hunted, and condemned prisoners were executed in bloody and inventive ways. The feature presentation was always a gladiator show, in which two trained combatants would fight one another to the death. The word “arena” means sand, and it refers to the sand that covered the floor of the ring to absorb the blood spilled during the fights. 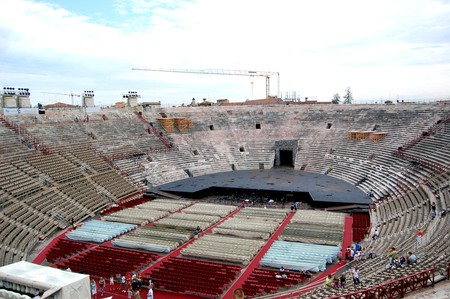 The center of the Arena, seen from above | mcpig/Flickr

In the 16th and 17th centuries, the theater hosted games and tournaments. The first documented joust took place here in 1590, with all kinds of equestrian games plus knights demonstrating their horsemanship and fighting skill.

Both Veronese knights and foreigners came to participate, from even as far as Sweden. Shows like bull hunting continued into the 17th century, and exotic animal exhibits were always popular. In 1751, a rhino was shown in the Arena to the wonder of all the spectators.

Even today, the Arena continues to play host to a variety of important cultural events. It’s one of the best places in the world to see opera is here at the yearly summer festival, which hosts up to four different productions. And from the most renowned opera singers of the world to contemporary artists like Pearl Jam and Adele it continues to be relevant. It was even the setting for a recent Bollywood movie called Rockstar.

That’s just a brief history of a place with 2,000 and some years of history on its back.