A Brief History of the Doge's Palace

Overlooking the waterfront from the Piazzetta San Marco is a big, pink building topped with a line of white pinnacles like an iced wedding cake. This is the Doge’s Palace, or Palazzo Ducale and it was the historic seat of the Venetian Republic. The building we see today is an iconic example of Venetian architecture and is full of fascinating stories from the height of La Serenissima, the Venetian Republic.

This location became the seat of government back in the year 810. A wooden palace was built, but much of it was destroyed in a fire and reconstructed. Although few traces remain of that original palace, we know that it was a fortress-like structure in stone, with a herringbone-patterned outer wall. In the 12th and 13th centuries, Venice was becoming a busy center of trade and building its empire by land and by sea. All this meant enormous wealth coming into the city and an expansion of the government, hence the need for a new governmental palace. Construction on the present-day building began around 1340. 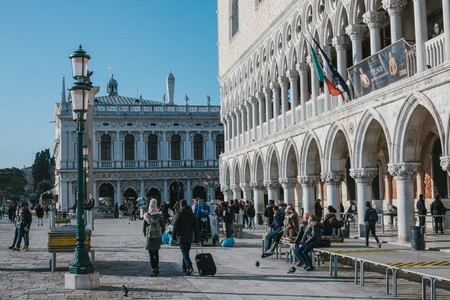 The earliest architecture in Venice followed the Byzantine style, with intricate patterns and brightly colored mosaics. Indeed, St. Mark’s Basilica, next door to the palace, has many pieces that were looted from Constantinople, the center of the Byzantine Empire. The Doge’s Palace, however, also contains influences from the Gothic style that was making its way across the European continent. The building merges the two architectural styles to form a look that is uniquely Venetian, patterned with pink Verona marble and white Istrian stone. 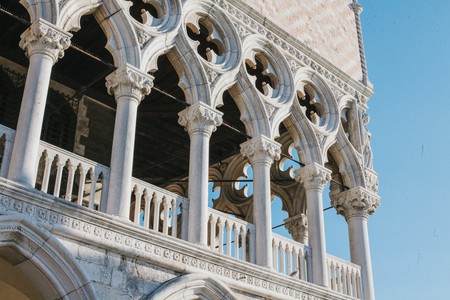 It took a century and a half to finish the Doge’s Palace, partly because fires were a constant threat in the city and often made reconstruction necessary. The wing overlooking the water was built first, so its corners are marked with dreamy stone sculptures from the 14th century depicting various Biblical scenes.

Around 1442, Giovanni and Bartolomeo Bon built the Porta della Carta, meaning “door of paper,” the grand entryway of the palace. Here, people waited here to give their petitions to the Council and laws of the Republic were proclaimed. Construction of the Piazzetta-facing side and the ceremonial internal courtyard were started around the same time.

The courtyard is a hodgepodge of styles, mixing Gothic with Late Renaissance touches such as the giant marble sculptures astride the ceremonial staircase. These colossal beings watching over the Giants’ Staircase are Mars and Neptune, who represent the power of Venice over land and sea. 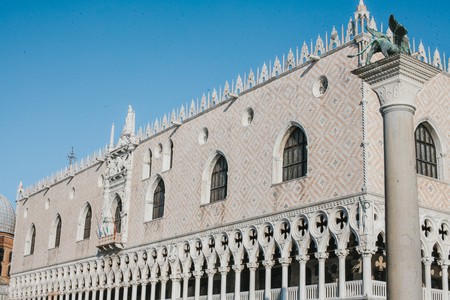 The interior of the palace is all pomp and grandeur, marked by a lavish mix of ornate furnishings and wall paintings by the biggest names in Venetian art. The palace includes the Doge’s private apartments, the institutional offices and the judicial chambers. Here, the Senate deliberated over financial affairs and sentences were handed out by the criminal courts.

One particularly interesting room is the Scrigno Room, where a silver book registered all the families of the noble caste. Venice was ruled by a particularly rigid class system, which was formalized in the 16th century by laws that forbid marriages between nobles and commoners. All the records for the legitimacy of these ancient aristocratic families are kept in a chest in this room.

Another fascinating story is housed at the Chamber of the Council of Ten. The Council of Ten, or Consiglio dei Dieci was set up after 1310, when a conspiracy led by Bajamonte Tiepolo and other noblemen tried to overthrow the state. The Council of Ten were the ultra-powerful elite of Venice, who often operated in secret and had a great deal of power.

The grandest room in the palace is Chamber of the Great Council, one of the largest rooms in Europe at 53 meters by 25. Its size served a practical function, as it held meetings that all male members of patrician families over 25 years would attend. It’s decorated with all kinds of Venetian iconography, including portraits of the first 76 doges. Doge Marin Faliero, who attempted a coup d’etat is blacked out. It contains also the huge Tintoretto painting called Il Paradiso, which at 22 by seven meters is the world’s longest canvas painting. 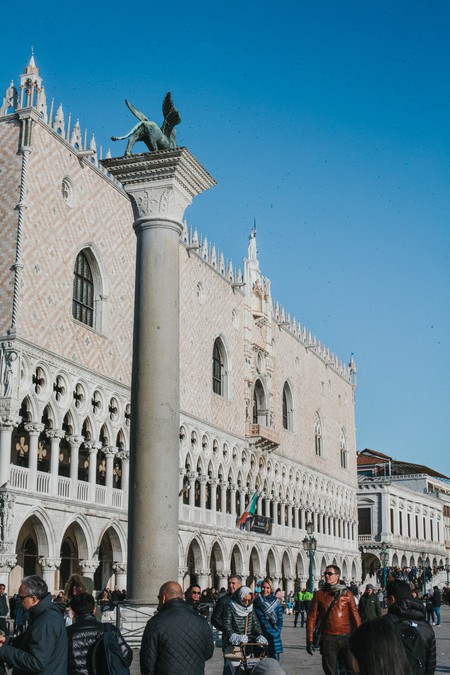 In an eastern wing of the palace are the historic prisons. They were damp, windowless cells, called i Pozzi, or “the Wells.” The most uncomfortable cells were i Piombi under the lead roofs, which became hot as furnaces in the summer. The eastern wing is attached to the palace compound by the famous Bridge of Sighs. It’s named for the sighs of the prisoners who, having received their sentences in the Doge’s Palace, pass through this bridge and get their last glimpse of Venice’s beauty before entering the dark prisons.

Casanova was famously imprisoned in these very cells and his biography describes his harrowing escape. The charming trickster fled by going up through the roof and re-entering into the Doge’s Palace itself. He then changed into every day clothes and walked straight out the front door. 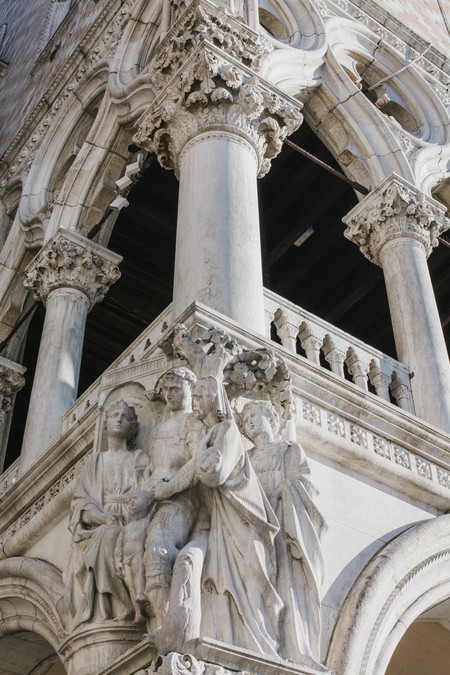 The only art theft to occur at the Doge’s Palace happened in a similarly thrilling fashion in 1991. Vincenzo Pipino of the Mala del Brenta crime group hid in one of the prison cells after lagging behind a tour group. In the middle of the night, he crossed over the Bridge of Sighes into the palace and stole an early 16th century painting of the Madonna and child. The painting was recovered shortly after, but his reputation as an art thief was cemented.

Of this palace, which holds so many riches and histories, there might be no more adept description than that of Byron himself, who wrote:

I stood in Venice, on the Bridge of Sighs,
A palace and a prison on each hand:
I saw from out the wave her structures rise
A thousand years their cloudy wings expand
Around me, and a dying Glory smiles
O’er the far times, when many a subject land
Looked to the wingéd Lion’s marble piles,
Where Venice sate in state, throned on her hundred isles!