A Brief History of the Carnival of Venice 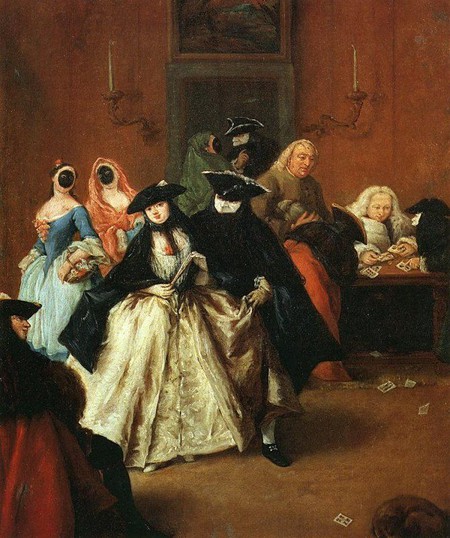 It’s February in Venice and the streets are positively packed. In St. Mark’s Square, masked figures adorned with jewels and feathers hover in picturesque corners. Elegant aristocrats out of the 18th century take over Caffe Florian. Little troublemakers empty bags of flour on one another. Drunken revelers zoom past in boats and gather outside bars and cafes. This is Venice’s Carnival, a time for all kinds of worldly pleasures.

From feasts of indulgent food and drink, to masked disguises and the rowdiest parties of the year, this celebration lasts for several weeks in February and March, ending with Martedi Grasso, or Mardi Gras, which marks the beginning of Lent. The festival supposedly began in 1162, in celebration of Venice’s victory over Aquileia. However, mask-wearing in the Venetian lagoon could go back as far as the 9th century. It’s a time when the rigid social hierarchy is softened, processions and plays come into town and music, dancing and debaucherous activity takes over the streets.

In a city with such a rigid social system, Carnival fever conferred many cherished freedoms. The most important was anonymity. For some weeks of the year, anyone could be who they wanted to be, whether it was a peasant mixing with aristocrats at their masked balls, a man dressing as a woman in the costume of a Gnaga, or Casanova, the son of lowly actors, pretending to be a state official to seduce a married noblewoman (a story he tells in full in his raunchy autobiography). 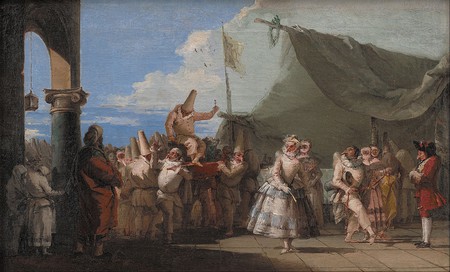 The Triumph of Pulcinella by Tiepolo | Google Art Project/WikiCommons

Masks were made with simple materials such as clay and paper mache and worn according to a few classic archetypes, such as the anonymous Bauta, the mysterious and silent Moretta, or the fascinating Gnaga, a kind of cross-dressing character with a basket of kittens under the arm. There are also archetypes from the Commedia dell’arte. Going to the theater was vital to Carnival life, and characters like Arlecchina the clever servant or Pierrot the sad clown were crucial components of the cultural imagination.

It was a transgressive time, and we can get a sense of just how transgressive through some of the regulations that were instated. A law in the 13th century forbade masked people from gambling, though, of course, the practice continued. Another 1339 prohibited visiting convents and monasteries while disguised. One can only imagine what kinds of raucous activities led to that ban. In 1511, female prostitutes petitioned to the Venetian government because male prostitutes dressed as Gnaghe were becoming too popular with their client base. That in itself is amazing, but the government responded even more amazingly, by permitting the ladies to lean out of their windows bare-chested as a form of publicity. 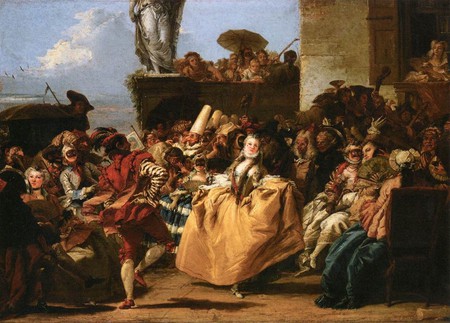 The Minuet by Giovanni Tiepolo | WikiCommons

At its decadent height during the 18th century, Carnival would begin the first Sunday in October, taking over just about half the year. The Catholic Church eventually had to forbid Carnivalesque celebrations on holy days, meaning that there was a lot of celebration going on, even on holy days. The comedies, masquerades and gambling houses would draw all kinds of international visitors to the city.

Unfortunately, all this came to an end when the Serenissima Republic fell to Napoleon in 1797. It was an era in which many old ways of life were coming to an end and modernity arrived in Venice in its own way. The Carnival was banned and all the celebrations and rituals associated with it were shut down. Venice was independent no more. 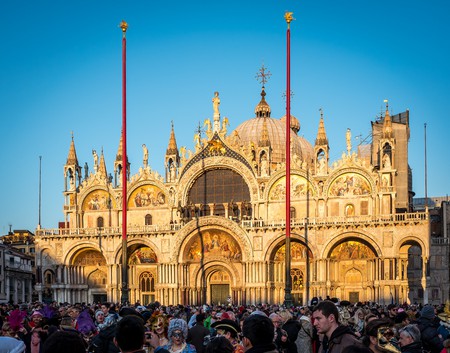 The Carnival wouldn’t be brought back until 1979 after two centuries of war and tumult, when the government began to redevelop the modern Carnival by bringing back the traditional events. Carnival season now floods the streets with tourists and mask shops have popped up all over the city, revitalizing the craft. It’s a postmodern version of the pre-modern festival.