Campo de’ Fiori, a medieval square in the historic center of Rome, is one of the main piazzas in the city and a favorite gathering space at all hours of the day. It hosts a daily market each morning, with local produce, flowers and delicacies, and comes alive at night when throngs of young Romans gather here to drink at the many bars in the area. However, just a mere 400 years ago the piazza itself was non-existent. Learn about its unique history and how it came to be a bustling commercial area over time.

Campo de’ Fiori translates to Field of Flowers, a name that dates back to the Middle Ages when the area was a meadow rather than a bustling public square. The area was underdeveloped for many centuries because of its proximity to the Tiber River, which was prone to flooding, though some buildings began popping up during the Middle Ages such as the Church of Santa Brigida (now in Palazzo Farnese), Palazzo della Cancelleria and Palazzo Orsini. In 1456 Pope Callixtus III began a public project to organize and develop the area and Campo de’ Fiori was born. It quickly gained traction as a center for socializing, trade and commerce among Romans, with many inns, restaurants and artisan workshops emerging in the vicinity. 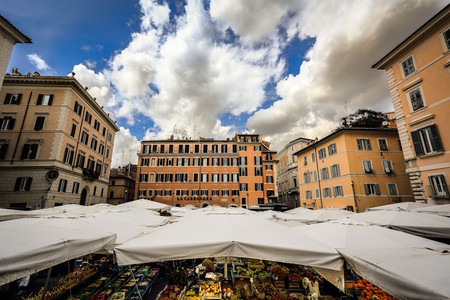 In fact, the streets surrounding Campo de’ Fiori are all named for trades: Via dei Balestrari (“crossbow-makers”) and Via dei Giubbonari (“tailors”) are two of many examples. Just off the square, the tiny piazza Arco degli Acetari (“vinegar-makers arch”) remains largely untouched and provides a wonderful glimpse into the original atmosphere of the times. The Campo de’ Fiori piazza was never architecturally formalized so the buildings are all mismatched and add to the picturesque quality of the square.

The cloaked statue of martyr Giordano Bruno is a focal point of the square, a testament to the area’s less illustrious past. Public executions were held in the square and Giordano Bruno, a Dominican friar and philosopher who championed the Copernican heliocentric model of the earth orbiting the sun (at odds with religious teachings of the time) was burned alive at the stake in 1600. The statue was erected in 1889 and faces towards the Vatican, defiant in his pose. 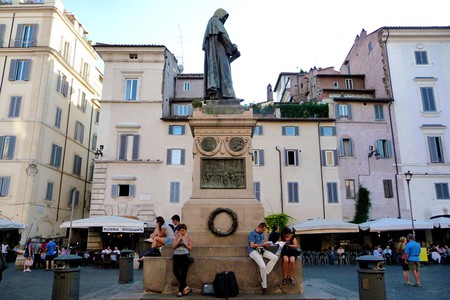 Today the daily market is held Monday-Saturday mornings in Campo de’ Fiori from 7:00AM – 2:00PM. It’s a lively place to peruse the dozens of stands selling everything from colorful produce to artisan meats and local delicacies while mingling with locals and tourists. In the evenings, Campo de’ Fiori comes alive and is one of the nightlife hubs in the center: young people especially love to gather at the bars and restaurants in the square. 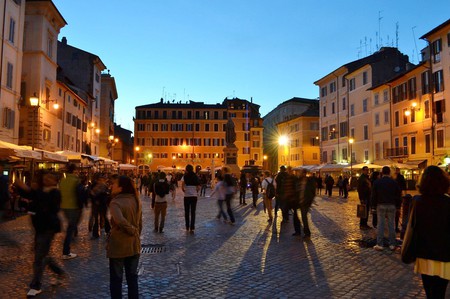