7 Reasons You Should Visit The Ostiense Neighborhood

Rome is all about art. The city is often referred to as an open-air museum due to its richness in archaeological sites. However, being off Rome’s well-trodden tourist paths guarantees unexpected sights. Quirky neighborhood Ostiense, with its modern vibes, hosts Rome’s universities and is rich in art, culture, and cuisine. Visitors in Rome who skip the Ostiense neighborhood will miss out on one of the most unique areas of the Eternal City. 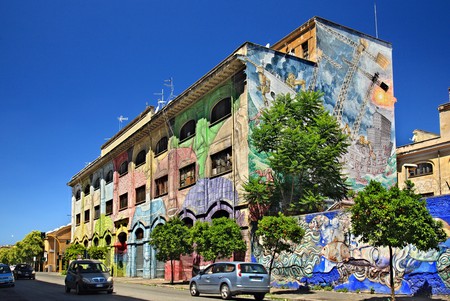 Originally an industrial area, then a neglected working-class neighborhood, today Ostiense is undergoing a cultural transformation, quickly becoming a magnet for the young. In the past years, Ostiense’s nightlife has become one of the most fashionable in the whole city. The neighborhood develops itself around Via Ostiense, the main street, from which it takes its name. Via Ostiense, once an ancient Roman road from the city’s cattle market to the port town of Ostia, is nowadays a very busy and congested street.

Every tourist coming to Rome expects to see ruins, churches, and many other archaeological sites; yet very few anticipate stumbling upon a pyramid. As a matter of fact, not many know that at the northern end of Via Ostiense there is the Pyramid of Cestius, a beautiful pyramid with white Carrara marble blocks.

The Centrale Montemartini is one of the most original, yet somehow undiscovered, museums in Rome. The museum has a very peculiar way of displaying its art works: a combination of ancient Greek, Roman, and Egyptian art alongside the turn-of-the-century turbines, and engines of the former ACEA thermoelectric power plant. Somehow the contrast between such different eras makes the works even more stunning. The museum’s appeal also lies in its location: thanks to the fact that it is far enough from the center of the city the museum has an entire block to itself.

Ostiense’s most famous attraction is probably the Basilica of St. Paul’s Outside the Walls . One of Rome’s four ancient patriarchal basilicas, and the second largest after St. Peter’s, this massive church was built over the traditional burial site of St. Paul. The beauty of the basilica lies in the fact that it is an oasis of tranquility and peace in Rome, one of the most chaotic cities in Europe. Today it makes the perfect spot for an over-stimulated tourist to take a brain break during a hectic day of sightseeing.

Ostiense, however, is mostly known for its new hipster identity and street art. Walking around this area you will spot many wall painting marvels. Ostiense now boasts some of the most talked about street art in the city. Progressive artists are turning the walls of abandoned buildings, train underpasses, and apartment blocks into canvases for spectacular murals.

With the revitalization of the neighborhood, it’s no surprise that Ostiense has become Rome’s culinary centers. New restaurants are popping up left and right, tempting food-loving Romans from all areas of the city, as well as few tourists. The most visited restaurants in the area are: Estrobar , Caffè Letterario, La Dogana Food, and Il Porto Fluviale.

If Rome is often described as a food mecca; Eataly is proof that this is true. Eataly is a multi-level gastronomic mega-store opened in 2012 in the former air terminal of Ostiense Station. It is both a store, where you can buy the best and freshest quality of Italian goods, but also an open restaurant, with seven different ‘hubs’. Its mission is to promote Italian food and eating habits, as well as the overall Italian way of life. For many Romans, the store has become a destination not only to buy their groceries but also to spend time with friends. Eataly is a true foodie delight.