The Appian Way, or Via Appia, is the reason why we hear the phrase “all roads lead to Rome“. This ancient path connected Rome to the port town of Brindisi, stretching over a distance of 600+ kilometers, which enabled trade to flourish throughout the empire. This path is named for Appius Claudius Caecus, a Roman politician who implemented this major project in 312 B.C. A stretch of the Appian Way is preserved in the regional park Parco dell’Appia Antica in Rome, allowing visitors to enjoy scenery, history and cultural monuments while walking along this historic path.

The 5th century Porta San Sebastiano is the largest gate of the Aurelian Wall and one of the best preserved gates in the city. It marks the beginning of the Appia Antica and was originally known as Porta Appia, or ‘door to the Appia’, which was later changed due to the pilgrims who passed through on their way to the Basilica of San Sebastiano and its catacombs. Visitors can climb inside the archeological ruin to the Museo delle Mura, which describes its construction method and offers views from up above. 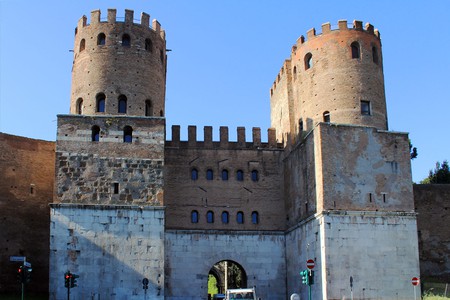 One of the first sights you’ll come across on Via Appia is a small 17th century church built to commemorate the place where St. Peter encountered an apparition of Jesus in the 2nd century. According to The Acts of Peter, St. Peter was fleeing persecution in Rome when Jesus appeared next to him on the Appia Antica. Peter asked Jesus, ‘Domine, quo vadis?’, which means, ‘Lord, where are you going?’ (and is now the name of the church). Jesus answered, ‘I am going to Rome to be crucified again,’ which Peter took as a sign to return to the city and die as a martyr and join Jesus in Heaven. Inside the church there is a marble slab with footprints believed to belong to Christ (the originals lie within the nearby Basilica of San Sebastiano). 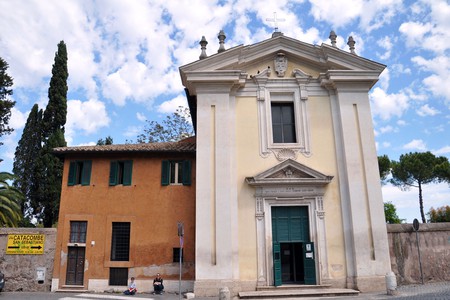 The large Christian catacombs of San Callisto are an important landmark along the ancient route because they comprise the Crypt of the Popes, which contained the remains of nine popes buried between the 2nd and 4th centuries. It was normal for early Christians to be buried enmass in underground necropoli, or catacombs, outside of the city walls in what was then the countryside of Rome. The catacombs were discovered by archeologist Giovanni Battista de Rossi in 1854 and contain many frescoes and carvings that allude to Christian salvation — for instance, a fish for Jesus and an anchor for the cross. 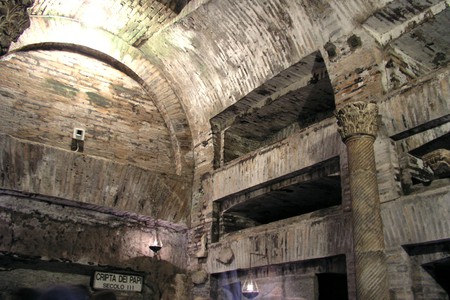 The Catacombs of San Sebastiano were the first necropolis to be referred to as a ‘catacomb’, derived from the Greek words katà and kymbe, which mean ‘near the cavity’ (they were located near a cave). The relics of Apostles Peter and Paul were housed here for a period within one of the three gallery levels excavated within the burial chambers. The catacombs contain beautiful frescoes and stucco work of various ornamentation and symbols. Next to them, the 4th century Basilica of San Sebastiano is believed to house imprints of Christ’s feet. 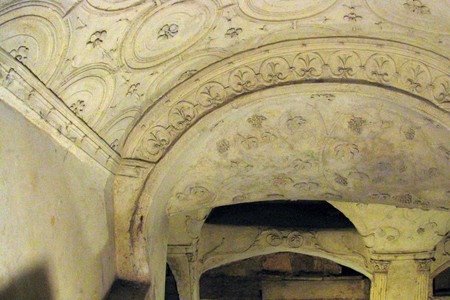 Further along the path lies the imposing and photogenic ruins of the Circus of Maxentius, remains of a 306 A.D. large open-air venue where public events took place during the ancient Roman Empire period. The circus was constructed by Emperor Maxentius, most likely with the intention to host games and festivities; however, records suggest that only inaugural, and probably funerary, ceremonies were held at this large space. Emperor Maxentius’s son, Valerius Romulus died in 309 A.D. and Maxentius himself died shortly thereafter in 312 A.D., leaving little time for festivities. The well-preserved ruins are an important example of the opus vittatum ancient Roman construction technique in which tufa stone layers are alternated with bricks to reinforce the structure. 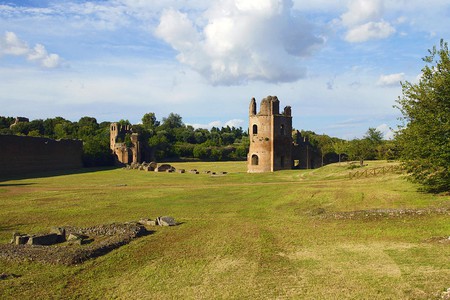 One of the best preserved tombs among Via Appia is the standalone Tomb of Cecilia Metella, built for the noble woman in the 1st century B.C. Her husband (or father-in-law) is believed to have been Marcus Licinius Crassus, who served under Julius Caesar and is considered to be the wealthiest man in Rome’s history. The family was prominent during the Republican period and probably erected the monumental tomb as an homage to Cecilia Metella and as a display of the wealth and power of the family. 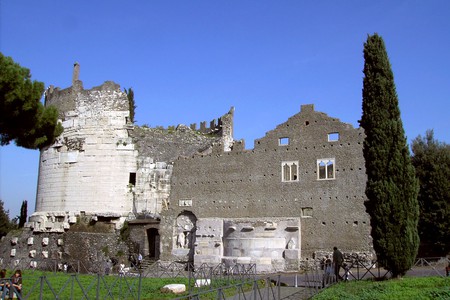 Tomb of Cecilia Metella | © WikiCommons
Give us feedback