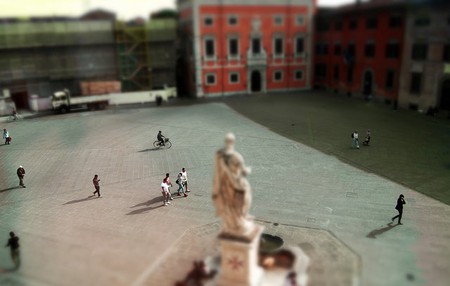 Here’s a list of 20 must-visit place to see in Pisa. From landmarks, such as the leaning tower and cathedral, to underrated attractions as well as the Botanical Gardens and Torre Guelfa, Pisa has plenty of hidden gems that deserve to be discovered by curious travelers.

The Leaning Tower is a must-see spot if you are in Pisa. The old-white marble torre pendente is pricey (18€pp) and the climb is hard but is worth it mostly for two reasons: the ticket includes the cathedral’s tour and the view of Pisa from the top is simply superb.

Recently opened to the public, 2 km of the city walls are now one of the must-see attractions in Pisa. The tour is free and opens every first weekend of the month, from 10am to 18pm and provides spectacular views over the city.

You can’t say you know Pisa without a visit to the Cathedral of Santa Maria dell’Assunta. This superb basilica is located in the Square of Miracles, near the leaning tower. It is one of the most important Italian churches, famous for its white-marble façade adorned by columns and statues.

The other underrated building near the famous torre pendente is the baptistery. One of the largest in Italy, Pisa’s baptistery is a masterpiece of Pisan-Gothic architecture, often used as concerts hall because of its incredible acoustics.

The Camposanto, or sacred field, is a large rectangular cloister whose gallery of arches decorated with Gothic tracery open into a courtyard. The construction of this stunning place began in 1278 and continued in the next centuries. It is situated near the Piazza dei Miracoli and if you want to visit a spot without lines and tourists, this is the place for you.

Opera del Duomo’s Museum is one of the best designed museums in Tuscany and is also one of the least-visited places on Pisa. The reason is simple: it is located near the famous tower and the cathedral, that’s why it is often overrated by tourists. But for those who do explore it, the museum offers superb views of the leaning tower from the second floor windows.

Piazza delle Vettovaglie, which literally means supply square, is one of the oldest squares of Pisa and is also the heart of city’s nightlife. It is formed by a succession of arcades where many shops, bars, restaurants and cafes are located. Near the square every morning, it is possible to shop at the Vettovaglie market.

Keith Haring’s popular graffiti art style is recognizable over the world and you still might be surprised to find an enormous mural in Pisa by the American artist. Haring really liked the city during his visit in 1989 and painted this public artwork on a wall of the church of Sant’Antonio, near the Central Station.

This small Gothic church dates from the early 13th century and is one of the hot-spots in Pisa. Located on the Arno river’s bank, in a dramatic scenery, Santa Maria della Spina is unfortunately close to the public but worth a visit just to admire its white-marble façade.

Located in Palazzo Mediceo, a palace designed by the architect Bernardo Buontalenti for Francis I of the Medici, this museum now showcases artworks from the collections of the most important European families. Once it was also the residence of the Lorraine and Savoy families and hosted famous Italian artists and scientists, such as Galileo Galilei and Francesco Redi.

A closeup of the bodice front and right sleeve of the crimson Pisa dress. The sleeves are tie-ons, and slashed with vertical slashes, in between the couched trims. A white camicia/shift would likely be pulled out through these slashes. This also gives a better glimpse of the trim's couching pattern. #crimsonpisadress #1560s #masteragostino #eleonoraditoledo #palazzoreale #palazzorealepisa #drakthistorie #couching #velvet

Palazzo Blu is undoubtedly the most exciting art gallery in Pisa. Recent shows have included Salvador Dalì, Amedeo Modigliani and Toulouse-Lautrec. From the middle of October until the end of January, it will be open to the public the Eschers’ exhibition. The palace also includes a cool café and bookshop at the back.

For those who are into ceramics, wooden sculptures and ancient paintings, the National Museum of Saint Mathew is worth a visit. The collection spans from the early Medieval period to the 16th century and includes sculptural works and paintings of Donatello, Beato Angelico and Ghirlandaio.

This red tower built in 1406 to control the river route into the city hosts inside a collection of arms of leading Pisan families that might be interesting. The best reason to come here is for the great view towards the coast and San Rossore Natural Park from the top of the tower.

Loggia dei Bianchi is a building realized by the architect Bernardo Buontalenti, now used to host markets, especially during the Christmas period. The loggia is located at the end of Corso Italia which is the main venue for shopping in Pisa, so prepare yourself to empty your wallet.

Crossing the river Arno after a little walk in Borgo Stretto, a street with several shops, you can reach the rounded Piazza dei Cavalieri, one of the most important squares in Pisa. This place is home to Pisa Normal School and Torre della Muda, made famous by Dante’s Inferno.

This church in Piazza dei Cavalieri was designed by Giorgio Vasari, one of the greatest Italian architects. It was originally built in 1565-69 and a few elements were added years later. Once here, be sure to see the richly decorated high altar with the throne of the martyred Pope Stephen I and the Baroque organ.

Pisa, like many of Italian towns, is plenty of beautiful churches that are worth a visit. The church of San Paolo is one of the oldest in town founded in 805 AD and was enlarged in the 11th and 12th centuries. The church contains Roman sarcophagus but it is its Pisan-Romanesque style façade that is worth a visit.

One of the most beautiful and less touristic squares of Pisa is Piazza Dante, a nice place located near the Faculty of Law in the centre of Pisa. Only few tourists come here to sip a coffee, while the students frequent this location to relax between class lessons.

The oldest botanic gardens in Italy are located in Pisa, just down the main street from the leaning tower. It is maintained by the University of Pisa and hosts rare examples of plants and flowers used by students to research and study. If you are asking yourself if a garden deserves to be included in your trip, the short answer is yes. The added bonus for budget travelers is that it is free.

The most beautiful civil palace in Pisa is Palazzo Agostini, built in the 14th century and is well preserved. Because of its red brick façade, it is considered one of the most spectacular palaces in the town. The main reason why this building is famous is for the Caffè dell’Ussero, a café founded in 1794 and is very popular among the Italian patriots and intellectuals.