17 Reasons Why You Should Visit Venice in the Summer 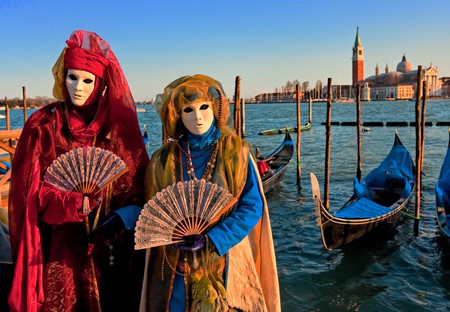 Canaletto and Monet have immortalised it in oil paint, Giuseppe Cipriani created the Bellini in its honour and it was the backdrop for Henry James’ The Wings of a Dove. Venice is an inspiring, mystical city that’s steeped in history, wonderment and fantasy. Surrounded by water, it’s made up of 177 canals, over 400 bridges and 139 churches. Here, we pick the best things to do in the Italian city fondly know as Queen of the Adriatic.

This public square is the perfect spot to take in St Mark’s Basilica in all its Byzantine glory; people watch from one of the many cafés and generally plan your Venice wanderings. Note – it often floods in the square so wellies should definitely be in your suitcase. 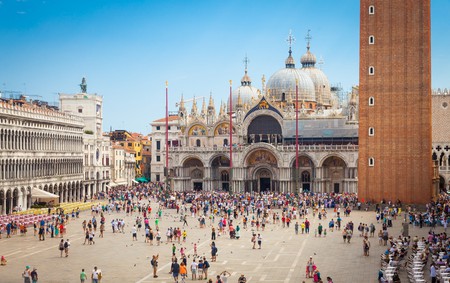 On Calle Lunga Santa Maria Formosa is this unusual and must-visit bookstore, where encyclopaedias become architectural features like a staircase, and gondolas and bathtubs are used to store and display old and new books. 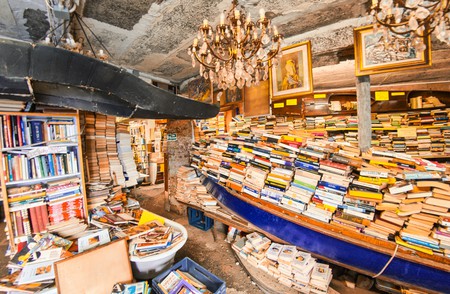 Over on Dorsoduro, just opposite one of the only two bridges crossing the grand canal is the Accademia which houses a rich collection of Venetian masterpieces by Renaissance greats such as Veronese and Tintoretto. They also exhibit temporary displays, like the recent showcase of American painter Philip Guston. 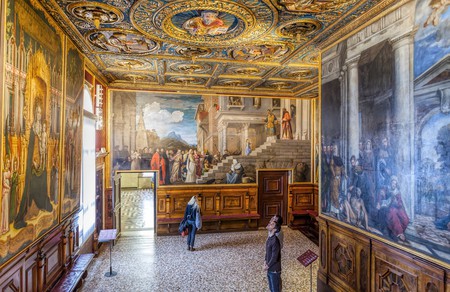 After you’ve taken in the glorious views of the Grand Canal from Rialto Bridge, be sure to take a few steps down into the Mercato di Rialto to get a glimpse at real Venetian life. Here the teaming fish and vegetable markets trade Tuesday through to Saturday, providing Venetian chefs and housewives alike with delicious produce. 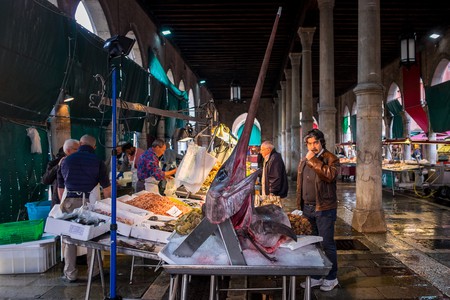 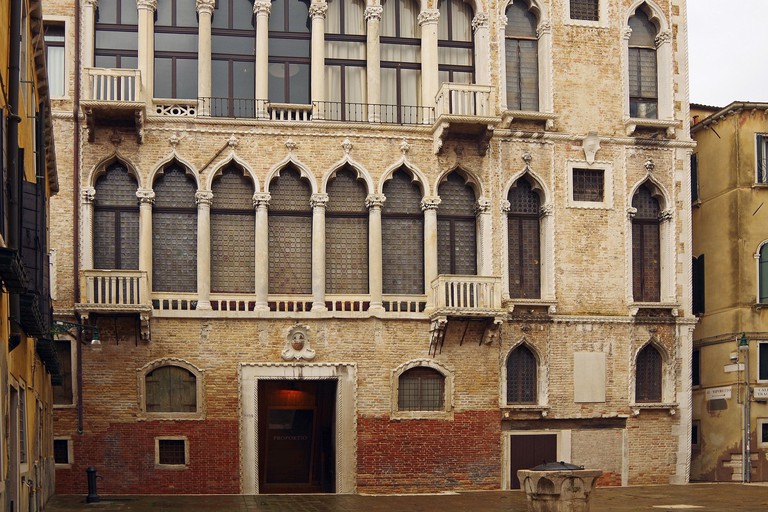 The Palazzo Fortuny hosts temporary art exhibitions | © Geoffrey Taunton / Alamy Stock Photo
The former textile-design atelier of Mariano Fortuny is a treasure trove of historical and contemporary curiosities. During the Venice Biennale, you are always guaranteed a spectacular exhibition, which in 2017 didn’t disappoint with Intuition. The group show, curated by renowned interior designer Axel Vervoordt, looked at how an instinctive approach has defined art across centuries and geographies. Marina Abramović‘s interactive crystals were a must-experience and you could see how dreams were interpreted into sculptural entities with Matteo Nasini’s 3D printed forms.
Open In Google Maps
3958 San Marco, Venezia, Veneto, 30124, Italy
+390415200995
Visit Website
Give us feedback

Since 1895 art aficionados and novices alike have been flocking to Venice for the Biennale di Venezia Arte that occurs very two years between May and November. As well as the stunning Giardini that’s filled with international pavilions and the impressive Arsenale, the Biennale also takes over Venetian palazzos and churches that you wouldn’t normally gain access to, making it the ideal time to explore an aspect of Venice that’s usually hidden. In 2018 the Biennale will host the 16th International Architecture Exhibition (May 26 to November 25, 2018) that consider Freespace. 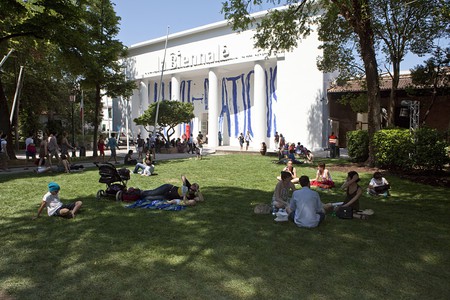 The two impressive Venetian venues of French art collector, Francois Pinault, Punta Della Dogana and Palazzo Grassi are worthy architectural venues to visit in their own right. So the fact they also present an acclaimed exhibition programme, make them must-visit destinations when in the watery city. During the summer of 2017 they were transformed by Damien Hirst’s epic Treasures from the Wreck of the Unbelievable exhibition, which alluded to the discovery of an ancient wreck and its many spoils. In 2018 you can delve into the world of German artist Albert Oehlen (Palazzo Grassi) and how artists take on the role of actor in Dancing With Myself at Punta Della Dogana. 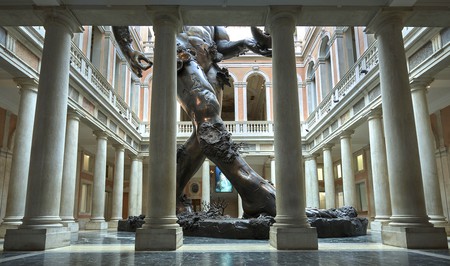 Installation view of Treasures from the Wreck of the Unbelievable at Palazzo Grassi | © Damien Hirst and Science Ltd. All rights reserved, DACS/SIAE 2017

Make sure you pack your bikini as you wouldn’t want to miss out on the opportunity of taking in the sun’s rays at Venice’s beach. Yes, as unlikely as it seems, Venice boasts a beautiful strip of coast – the Lido – that can turn you’re city trip into a beach getaway. 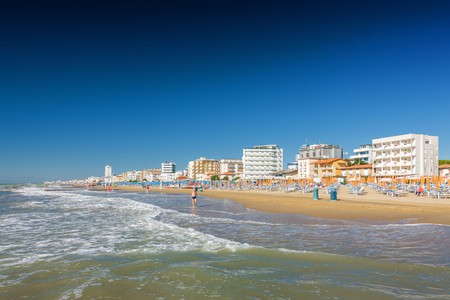 Known for its exquisite glass designs, the island of Murano has more to offer than just hoards of shops flogging an abundance of glass trinkets. Make sure you experience French artist Loris Gréaud’s wondrous installation, The Unplayed Notes Factory in a former Murano glass factory (until November 26, 2017). 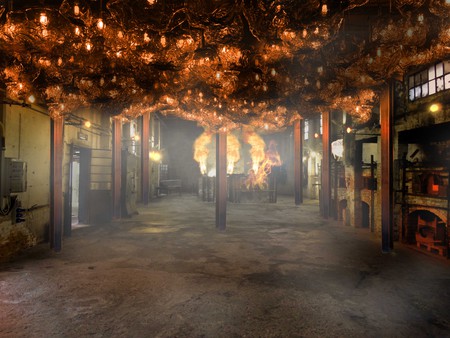 The Russian foundation opened their first Venetian site in 2017 at Palazzo delle Zattere with a brilliantly diverse group show, Space Force Construction. Here, works by key Soviet artists from the 1920s and 1930s were brought into dialogue with contemporary artists. You could have your political views tested, meander through a pine tree forest and be dwarfed by an immersive Barbara Kruger installation. For 2018 The Electric Comma explores how language has changed and the impact of artificial intelligence. 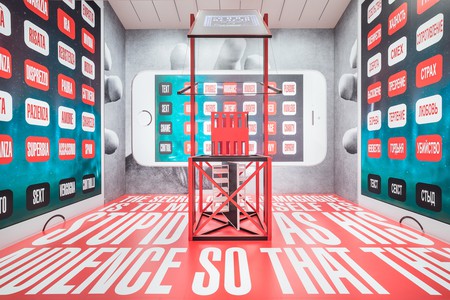 During the Biennale is the perfect time to visit this impressive baroque palazzo in Dorsoduro – skipping both entry fee and the need to book. Unassuming from the outside, after the pretty garden, the building is most notable for its undeniably stunning ballroom with frescoes by French artist Louis Dorigny, mirror and trompe-l’oeil paintings. 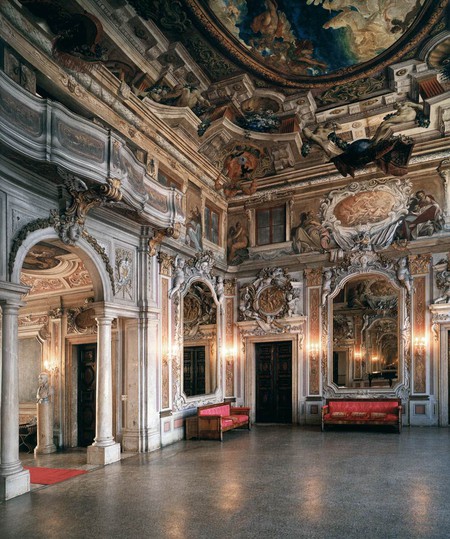 As well as having spaces in Milan, the fashion house’s art foundation also resides in Venice and is a definite must-visit location, both for appreciating the 18th-century palazzo’s architecture but also for the impressive roster of exhibitions. Coinciding with this year’s Venice Biennale is the brilliantly immersive exhibition The Boat is Leaking. The Captain Lied (on until November 26, 2017) that brings the brilliant photographic work of Thomas Demand to life in a maze of mise-en-scène settings. 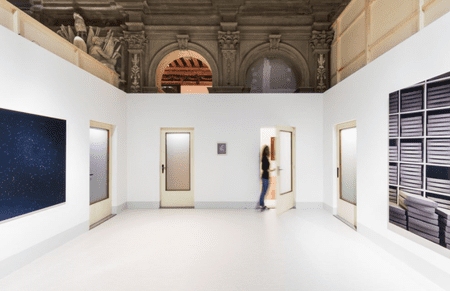 Flooding is to be expected in Venice, but the crypt at San Zaccaria has turned the annoyance of unwanted water into a celebratory spectacle. 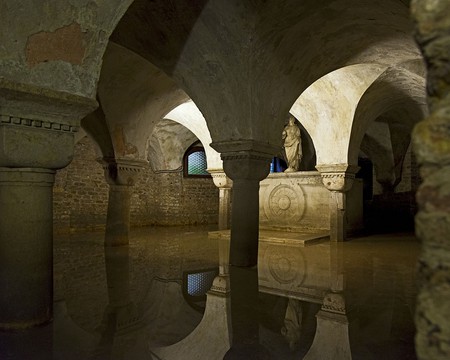 Over on San Giorgio Maggiore, the Cini Foundation has multiple buildings with a host of must-see shows from Alighiero Boetti and Ettore Sottsass, to an outdoor sculptural installation by Pae White. Be sure not to miss the Faurschou Foundation’s presentation of Robert Rauschenberg and Warhol that focuses on their ingenious reinterpretation of printmaking as an art form, rather than just an industrial tool. 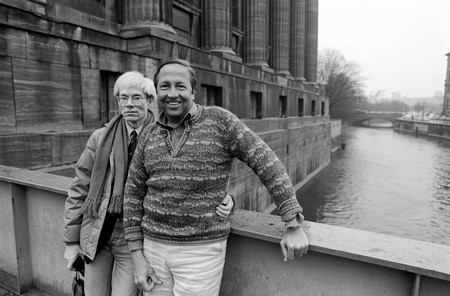 Overlooking St Mark’s Square is the Doge’s Palace, an impressive gothic wonder that has developed throughout the centuries. Once the seat of government, the city’s courtrooms, the Doge’s apartments and a jail, the palace is a must-see. Alongside the permanent displays, they’re currently presenting a fantastic Bosch exhibition with a virtual reality experience finale where you can step inside the weird worlds of the Flemish painter, as well as presenting work by contemporary British artist, Douglas Gordon (until November 24, 2017) in the cells of the former prison quarter. 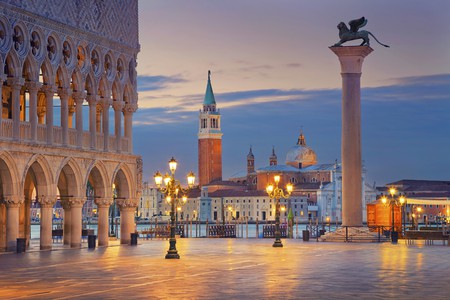 Just a short boat ride to the northern side of the Arsenale, is HyperPavilion (on until October 30, 2017), a free group exhibition about the impact digital technology has had on art. Here, in three enormous historic warehouses, you’ll encounter immersive site-specific work ranging from film to sculpture that explore the hybridity of digital and physical worlds. 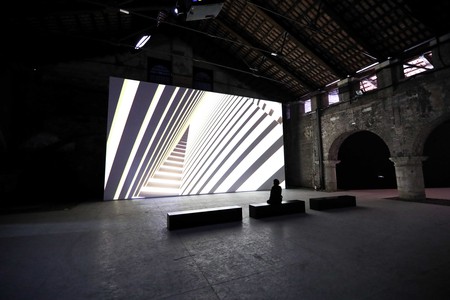 Every year, the 400-year-old carnival takes over Venice in a frenzy of masked revellers. Created to celebrate the end of the plague, the Redentore (July 15–16, 2017) turns Venice into a musical bonanza. A 300-metre long pontoon is constructed from Zattere to Giudecca, so you can literally walk on water to the Palladio-designed Il Redentore church which was built by order of the Doge when the plague ceased in 1577. Venetian’s get into full party mode, decorating their terraces, feasting and dressing up in traditional costumes. The celebrations culminate in a giant firework display over the gondola-filled lagoon on Sunday night. 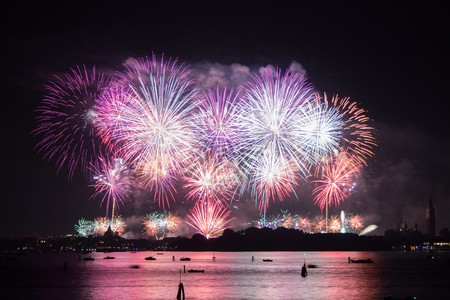