16 Beautiful Paintings By Caravaggio You Haven't Seen Before

Caravaggio, The Beheading of St. John the Baptist, 1608 | © Caravaggio/WikiCommons

A man that can only be described as a true master, Michelangelo Merisi da Caravaggio, best known as Caravaggio, left behind numerous paintings brimming with realism, drama, emotion, and, oftentimes, movement. His artworks are particularly special because of his masterful skill of using light and dark for dramatic effect. The Culture Trip has put together a list of some of the paintings that aren’t often seen due to various reasons, including being in private collections, never traveling outside their permanent home, or because they’ve sadly been lost.

Caravaggio’s beautiful 1609 work titled Nativity with St. Francis and St. Lawrence is unfortunately lost. A large altarpiece depicting a nativity scene, this work was stolen in 1969 from a Sicilian church. It is believed that the local mafia stole the work and hid it in a farm where it was ultimately destroyed by animals and later burned. However, it still remains on the FBI’s’ top ten art crimes’ list. 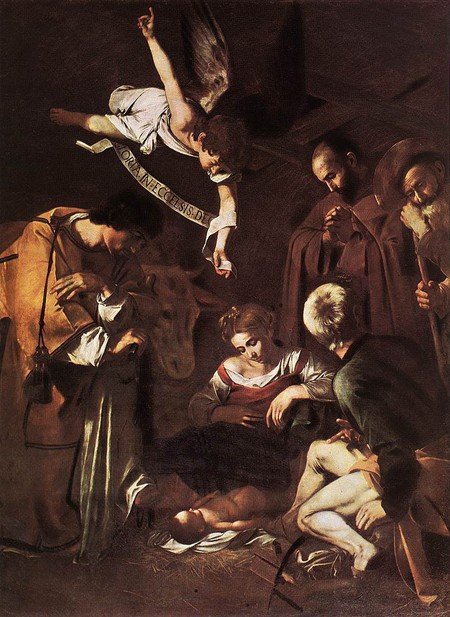 The Conversion of St. Paul is part of the private Odescalchi Balbi Collection in Rome. A beautiful, dynamic painting filled with movement and emotion, it is made all the more so by Caravaggio’s brilliant use of tenebrism (dramatic use of light and dark). The painting is only shown to the public on special occasions; therefore, it is most likely a painting you haven’t seen before (in person). 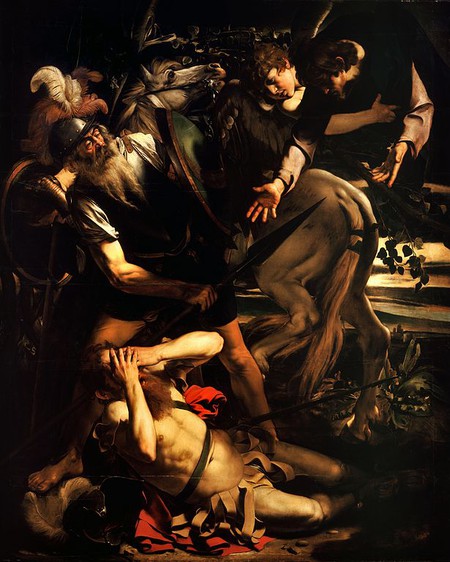 A famous composition by Caravaggio, The Lute Player features a young man with dark hair playing the lute. He is seated at a table covered with a red cloth on which rest other musical instruments along with sheet music. There are three variations of this work, with this particular version being in the Wildenstein Collection; however, not everyone agrees this is by Caravaggio.

There is always going to be some disagreement when it comes to attributing a work to a particular artist, especially if there is no concrete proof. Just like the above painting, this version, Apollo the Lute Player, has also come into question by certain people about its being a real Caravaggio. The overall composition is quite similar to the aforementioned work; however, the colors in this version are more subdued and there is a vase of flowers with fruit adorning the table. It is currently in a private collection. 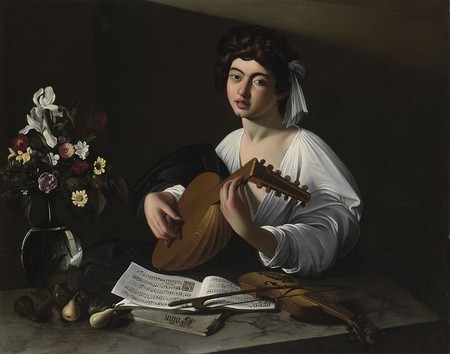 Another work held in a private collection, the Portrait of Maffeo Barberini — painted around the year 1598 — depicts a man from a well-respected Florentine family. Maffeo Barberini was also known as Pope Urban VIII; however, this work was painted before he became the pope. Because it is part of a private collection, it is rarely shown to the public. 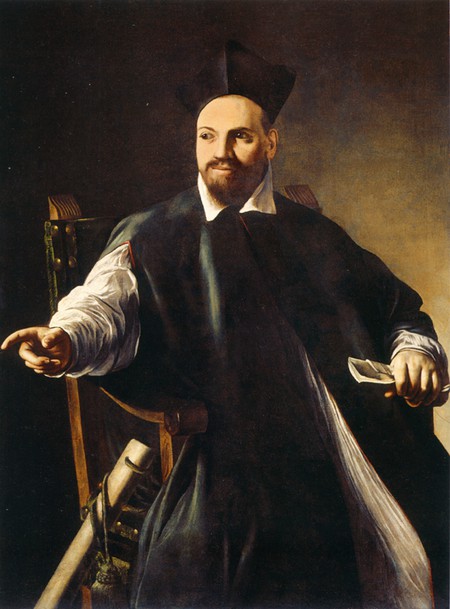 The Sacrifice of Isaac is another religious work by Caravaggio, painted around 1598, and depicts the moment from the Old Testament when Abraham is about to sacrifice his son. As with most ‘rediscovered’ works, there is often some doubt as to whether Caravaggio painted this version; some experts say yes, while others wholeheartedly disagree. If it were, indeed, done by Caravaggio’s hand, this would be the first version, with another version painted in the early 1600s. 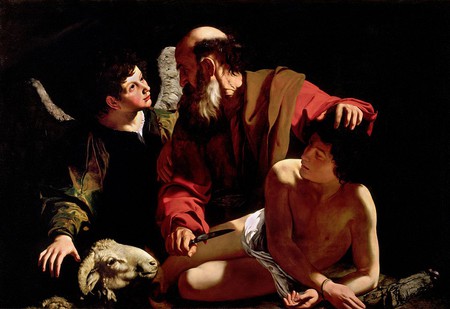 Another subject that Caravaggio painted several times throughout his career, Mary Magdalene in Ecstasy, from 1606, is believed to be the original version. Located in a private European collection, the beautiful painting was identified by one of the leading Caravaggio experts, Mina Gregori, as being crafted by the master himself. It still remains within the private collection, not seen by many. 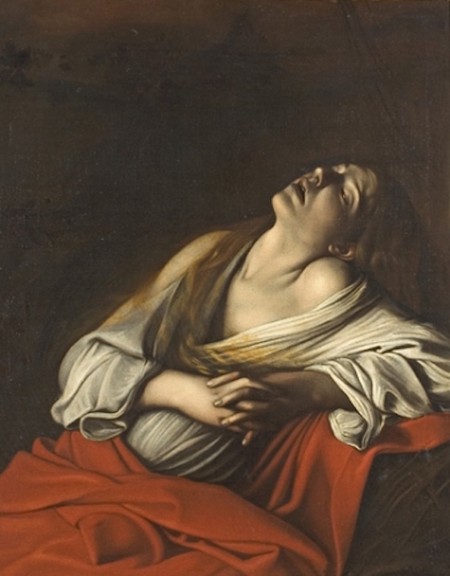 Even though the theme of this work is pain, The Crowning with Thorns is a breathtaking artwork brimming with emotion. Depicting the moment when Christ receives the crown of thorns before his crucifixion, the painting is sure to evoke strong feelings for whoever looks at it. A dark figure is to the left of Christ, while Christ himself, along with the two torturers, is washed in light. Located in the Kunsthistorisches Museum in Vienna, it rarely travels outside the museum. 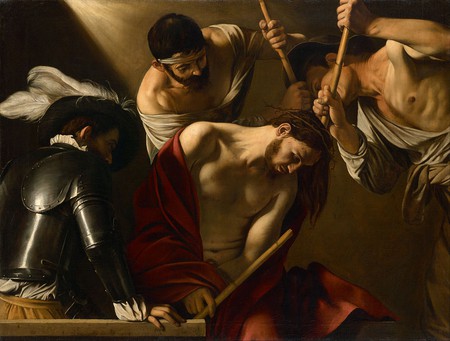 While this painting is located in a major museum, the National Gallery of London, it, like many other works of art, doesn’t leave the premises all that often. The Supper at Emmaus is another religious work, but this time showing the moment when two disciples realize that a resurrected Christ is sitting at the table with them. Again, the use of light and shadow intensifies the dramatic notion of the work. 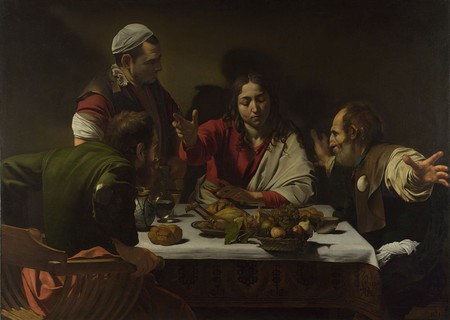 Caravaggio, The Supper at Emmaus, 1601 | © Caravaggio/WikiCommons

Another popular subject for Caravaggio, John the Baptist (Reclining Baptist) from 1610 is in a private collection in Munich, Germany. In this version — which, like many others, is disputed — Caravaggio depicts a young John reclining on top of a red cloth, which is partially draped over the mid-section of his body. Only parts of his arms and legs, along with the red cloth, are truly visible.

Rediscovered in the early 2010s within a private collection (it was previously thought to be by an anonymous artist), Saint Augustine — believed to be from around 1600 — shows the saint dressed in his monastic habit while he sits at his desk. The saint is looking down at an open book while in deep thought and takes notes. It was exhibited for the first time in 2011 at the National Gallery of Canada.

Unless you’ve visited the Casino di Villa Ludovisi in Rome, you definitely have not seen Caravaggio’s Jupiter, Neptune and Pluto in person because it is in a fix location (as it is a fresco). Located on the ceiling and commissioned by Cardinal del Monte (who was interested in alchemy), the work is unusual for a fresco because it was made using oil paint.

The Taking of Christ was missing for over two centuries, but thankfully the art world has recovered it. Currently in the National Gallery of Ireland, the painting hung in the dining room of the Jesuit Community in Dublin for many years, with everyone thinking it was a copy. Featuring seven figures, all of which fill out the majority of the composition, the painting, once again, showcases Caravaggio’s skill in using light and dark to create a bold (and in this case, claustrophobic) work. 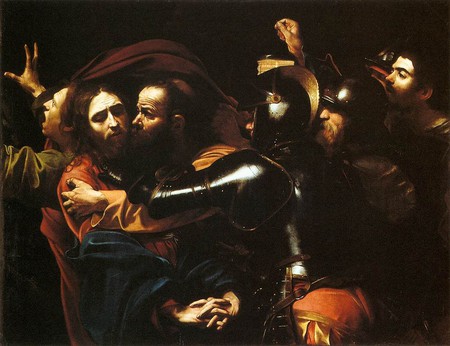 Caravaggio painted two versions of The Fortune Teller, with the one on this list being the earlier version. Painted around 1594, this painting depicts a young man who is having his palm read by a gypsy girl — identifiable by the white turban on her head. It looks innocent enough; however, if you look closely, you can see that she is in fact removing his ring. This work can be seen at the Musei Capitolini in Rome. 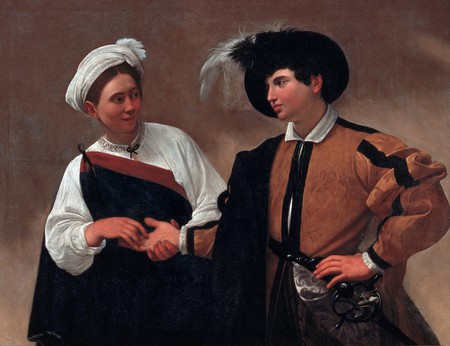 The Burial of St. Lucy is a true Caravaggio masterpiece; however, many people may not be that familiar with it because it never leaves it permanent home in Sicily. Located inside the church of Santa Lucia alla Badia in Syracuse, this brownish, golden-hued painting shows the moment when a gravesite is being dug for the deceased Saint Lucy — a woman who gave her wealth to the poor — whose body lies on floor. 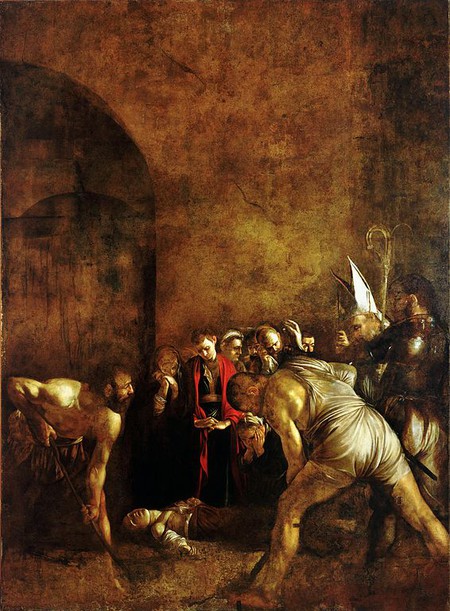 The highly dramatic painting, The Beheading of St. John the Baptist, still resides in the locale for which it was commissioned. Located in the Oratory of the Co-Cathedral of St. John in Valletta, Malta, this painting depicts St. John being held on the ground while blood is gushing from his neck. Salome waits nearby holding a golden platter, while another woman watches in horror as the scene plays out. 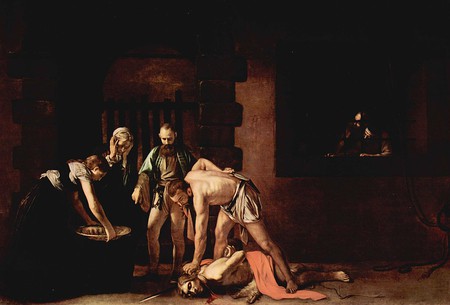 Caravaggio, The Beheading of St. John the Baptist, 1608 | © Caravaggio/WikiCommons
Give us feedback