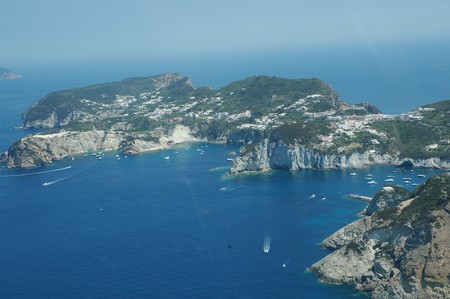 Ponza is a special destination. Legend says that it was the mythical island of Aeaea which was the home of the sorceress Circe from Homer’s Odyssey and it has been bewitching visitors ever since. There is a relaxed and very beachy vibe to this place with just enough glamour to make it interesting. So pack your bikini and snorkel mask, and read why we think Ponza is Italy’s hidden paradise island. 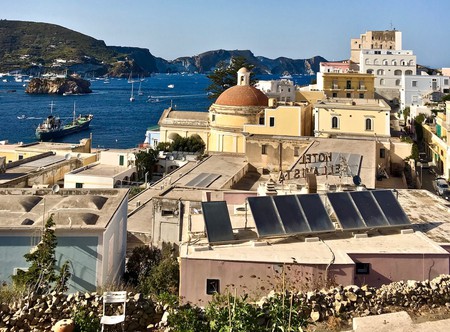 It is not as crowded as the Amalfi Coast

The secret is out about the Amalfi Coast. Escape the crowds and the tour buses with a ferry ride to the island of Ponza instead. Italians have known about this island paradise for centuries but it is not on the international tourist beat. There are likely movie and sports stars on the yachts parked in the harbor, but you can stop for a drink with your hair still salty from a day at the beach on your way back.

The water is ridiculous

Crystal clear and in shades of blues and greens, the water in Ponza must be seen to be believed. With two main beaches and at least fifteen coves, you have your choice of where you would like to dive in.

The food is good

Fresh seafood, milky mozzarella, briney olives and wild herbs are what inform the cuisine of the island. Your choices range from a simple tuna sandwich on the beach to an elegant dinner overlooking the port. Ponza’s location midway between Rome and Naples means that the pizza is terrific.

There are uninhabited islands to visit

Ponza is part of what is called the Pontine archipelago. The only other inhabited island is Ventotene, which is an hour’s ferry ride away. You can rent a boat or take a cruise and explore the gorgeous coves off the nearby islands of Palmarola and Gavi, or trek on the nature reserve on Zannone.

The diving is great

Because the water is so clear and deep, Ponza is an amazing destination for the diving enthusiast. Spend the day with the experts at Ponza Diving, who have equipment to rent if you need it. With almost twenty different dive sites within an hour’s boat ride from the main port, there is plenty underwater to explore, from shipwrecks to rock formations teaming with colorful sea creatures.

The shopping is terrific

You can rent a scooter

There is no need to have a car on the island. Since it is just barely seven kilometers long, it is easy to get almost everywhere on foot or by local bus. If you prefer a little more independence, rent a scooter or a beach jalopy and drive from end to end in search of wild trails and empty swimming spots.

There are beach clubs

While there are plenty of secret coves that you need a boat to get to, Ponza also has a few full service beach clubs. Italian style beach clubs rent chairs and umbrellas and have services like bathrooms, changing rooms, bars and restaurants. Frontone is the easiest beach to reach on the island. There is a regular water taxi service from the port from about 10am until 7pm, and several clubs to choose from along the long pebble stretch. If you like a sandy beach, take the bus and about 300 steps down to Cala Feola. Locals love the clear water and smooth rocks at nearby Piscine Naturale.

There are Roman ruins

When you first catch a glimpse of the island on your ferry ride, if you look towards your left you will spot the first century remains of what is called Grotte di Pilato, where people once used to breed moray eels and lobster for the wealthy Romans who lived on the island. There are remains of two villas: one underneath the Punta della Madonna and the other in the Santa Maria neighborhood. Pieces of Roman era aqueducts are visible in the part of the island called Cala dell’Acqua. You can also visit one of the restored Roman era water cisterns.

Leave the beach lounging behind and head up into the wild hills for a hike instead. There are a number of good trails for trekking – some better marked than others. Follow the road up and out of town towards the highest point on the island to the Monte Guardia. See where the island grows its wine by taking the Fieno trail. Hike past the terraced fields planted with rows of Ponza Biancelli, Forastera, Pedirosso and Vernaccia grapes to the Punta del Fieno and views towards Palmarola.

At the gelateria Blue Marine you are not allowed to ask what the flavor sgranocchione is, but be brave and go ahead and order it. It is a delicious mystery. This shop makes waffle cones and crepes to order, so get in line. Don’t worry though, the staff scoop quickly.

Museum with a view

It is a hike to reach this charming small museum from the road or up from the beach in Frontone. Just following the hand printed signs and you will find it. The museum is the passion project of Gerardo Mazzella, founder of the Cultural Association Cala Frontone, whose aim is to promote the true values of Ponza. A few small rooms are filled with meticulously curated items ranging from farming and fishing tools, to prints and painting detailing the island’s history. If the hike worked up an appetite, there is an excellent restaurant with dishes based on Mazzella’s grandmother’s recipe next door.