12 Reasons Everyone Should Visit Verona at Least Once 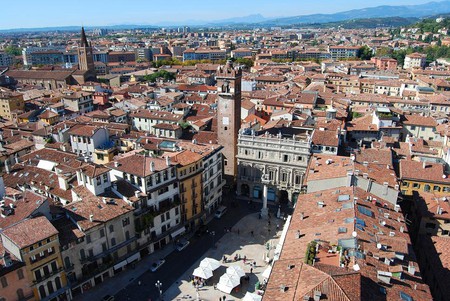 Verona seem from up high on Lamberti tower | Wikimedia Commons

Verona is an ancient city, with its history stretching back to Roman times. Cut through its center by the river Adige, it’s a gorgeous town full of winding streets, lively bars, intimate restaurants and bustling piazzas. Lovers of Renaissance art will find plenty to admire in its museums and churches, while ancient history buffs will delight in the Roman ruins hidden all over the city. Die-hard romantics will enjoy all the monuments dedicated to Romeo and Juliet, fictitious though they might be. Foodies will find a paradise of good eats, from budget nibbles to luxurious dining.

On the trail of love

Though all of it is probably made up by some savvy Veronese, the story of Romeo and Juliet can come to life for you here. You can visit the house and balcony of Juliet, the house of Romeo, the tomb of Juliet and the Renaissance-era gate through which Romeo left for Mantua. You can even write your own note for the fictional Juliet asking for guidance in love just like in the dreamy Hollywood romance “Letters to Juliet.” 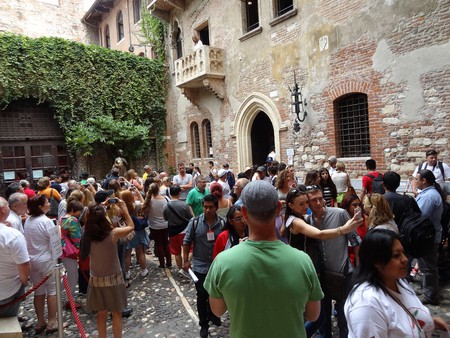 The courtyard of Juliet's House | igcameron

The Bard set many of his plays here in this very city. That includes not just Romeo and Juliet, but also The Taming of the Shrew and The Two Gentlemen of Verona. Clearly something about the city inspired him, leading him to write some of his most hilarious comedies and lyrically beautiful tragedies.

Though Verona can be quite touristic, it’s not quite overwhelmed with tourist hordes like nearby Venice. Verona is a city where you can find places to escape the crowds. Any of the neighborhoods outside the historic center, such as Veronetta, will be much more quiet and peaceful, with the feeling of a typical Northern Italian town.

Verona has a long tradition of good food, and you’ll taste some incredible things in local trattorie and bacari if you know where to go. Veronese food is heavy on meat, usually served with a side of polenta. You shouldn’t leave without tasting the risotto, a creamy rice dish flavored with anything from vegetables to wine. There’s also the airy potato dumplings called gnocchi and a thick and chewy pasta called bigoli.

The region around Verona produces some of the best wine in all Italy. Be sure to taste Amarone, the luxurious wine made of raisins instead of grapes, which was once reserved for royalty. Other areas famous for producing wine include Bardolino and Valpolicella; you’ll find wine from these regions all around the city.

Despite the best efforts of far right political parties, Italy is becoming an increasingly multicultural place. As much as 12 percent of the population in Verona hails from other countries. While Italy is not quite a melting pot, these new immigrants are certainly bringing their cultures and viewpoints into the mix in their own way.

Just a short drive from the city is Lake Garda, where you’ll find lovely towns and villages dotting the circumference of a truly picturesque natural landscape. Check out Malcesine, a delightful medieval town with an old castle, or Bardolino, where wine culture comes to life.

Coffee culture is important all throughout Italy, and Verona is no exception. The bustling center of city life is the Piazza delle Erbe, where you’ll find local cafes and coffee shops full of locals and visitors alike. Check out the Caffe Filippini, which has been operating since 1901, where you can sit in the sun and people-watch for hours over a long, leisurely afternoon drink.

Verona’s urban center was built up in ancient times, during the first phase of Roman expansion. It’s actually the number two place behind Rome in the country to see Roman ruins, which are incorporated seamlessly into the every day infrastructure of the city. History buffs will enjoy wandering the city looking for pieces of this past, as well as visiting the Archaeological Museum full of Roman artifacts.

The Museo di Castelvecchio is a medieval fortress renovated by modernist architect Carlo Scarpa and it hosts the civic art collection. There, you’ll see everything from the richly colored, earthy compositions of Andrea Mantegna to the dynamic, flying canvases of Tiepolo, to medieval weapons and other historical bric-a-brac.

This open-air amphitheater boasts some 2,000 solid years of history, and its stones have seen everything from gladiator games, to Adele concerts and lyric operas performed by candlelight. It’s a delightful place to see a performance, especially on a summer evening as the long days fade into twilight.

Verona’s summer festival at the Arena is one of the best places in the world to see opera, due to the incredible acoustics of the ancient Roman amphitheatre. Serious fans shouldn’t miss out on the Arena Museo Opera, which hosts a multimedia exhibition dedicated to the art form, with tons of paraphernalia from big names like Puccini and Verdi, as well as old costumes and sets.