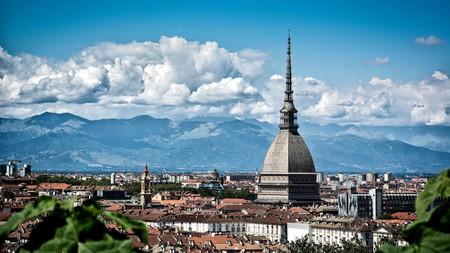 Turin, the capital of Piedmont, is a refined, elegant city of great historical interest – with added contemporary, cosmopolitan buzz. Admire its baroque architecture, sample Italy’s finest chocolate at a historic coffee house, or take in experimental art, plus much more, in our guide to the best things to see in Turin.

Building, Cinema, Museum, Synagogue
Facebook
Email
Twitter
Pinterest
Copy link
Share
Map View
The tall spire of Mole Antonelliana is the pinnacle of the Turin skyline and an iconic symbol of the city. It was built as a synagogue in 1848 when freedom of worship to non-Catholic religions was officially granted. Today it is the Museo Nazionale del Cinema (National Museum of Cinema), housing equipment and memorabilia from the earliest days of film production to the present. But the real draw is the viewing platform at the top of the building, which offers amazing views of the city and mountains beyond.
Open In Google Maps
20 Via Montebello, Torino, Piemonte, 10124, Italy
+390118138560
Visit Website
Give us feedback
Book Now 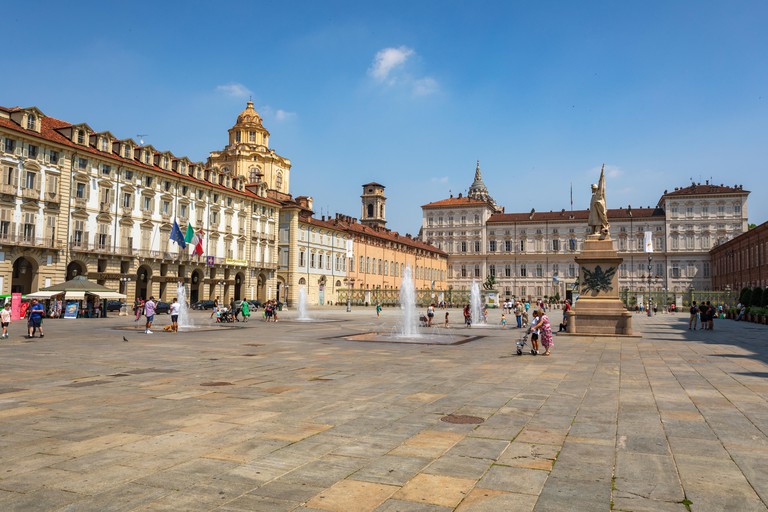 In the heart of the historic centre of Turin is Piazza Castello, which hosts two major Baroque structures designed by architect Filippo Juvarra – Palazzo Reale (Royal Palace) and Palazzo Madama. The latter was so admired by Napoleon that he made it his Turin residence. Juvarra is celebrated for his weightless details and dignified simplicity, and these two buildings stand in testament to his mastery of majesty without pomp. Palazzo Reale was originally built in the 16th century, but underwent modification by the architect at the request of princess Christine Marie of France in the late 17th century. The ochre palace seems infinite, stretching out on three sides of a rectangle with an elegantly arched but simple frontage. Palazzo Madama dates from 1003 and the façade was added by Juvarra in 1718. The rear of the castle remains in its medieval form so it is an incredibly unusual structure for this reason alone. Juvarra’s façade is a true baroque masterpiece, but the interior is perhaps even more spectacular – the monumental and lofty double stairway has been replicated around the world. Palazzo Madama is also home to the Museo Civico d’Arte Antica, which has a remarkable collection of paintings from the medieval, Renaissance and baroque periods. 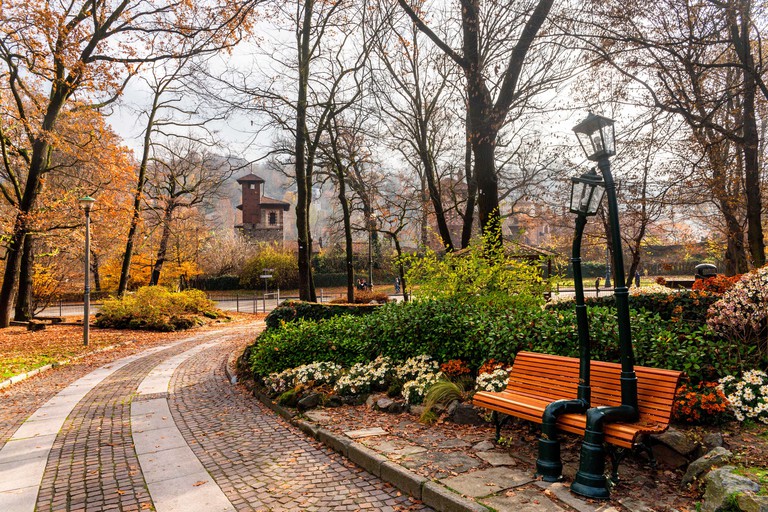 © mauritius images GmbH / Alamy Stock Photo
Located on the west bank of the River Po that runs through the city, Parco del Valentino makes for lovely walks. Along the river you can admire the architecture of the grand villas and residences that line the river banks. The park is also home to the Castello del Valentino – one of the Residences of the Royal House of Savoy with UNESCO World Heritage Site status.
Open In Google Maps
Corso Massimo d'Azeglio, Torino, Piemonte, 10126, Italy
Visit Website
Give us feedback

Established in 1995 by major patron and Art Review Power 100 regular, Patrizia Sandretto Re Rebaudengo, the foundation supports young Italian and international artists with particular focus on commissions and the production of new work. The museum space in Turin is at the centre of the foundations activities and is one of the premier destinations for viewing experimental contemporary art in the city. Artists on view have included Isa Genzken, Hiroshi Sugimoto and Gerhard Richter. If you have time to explore beyond Turin you can also visit Palazzo Re Rebaudengo in Guarene d’Alba, an 18th-century manor on the Roero hills. 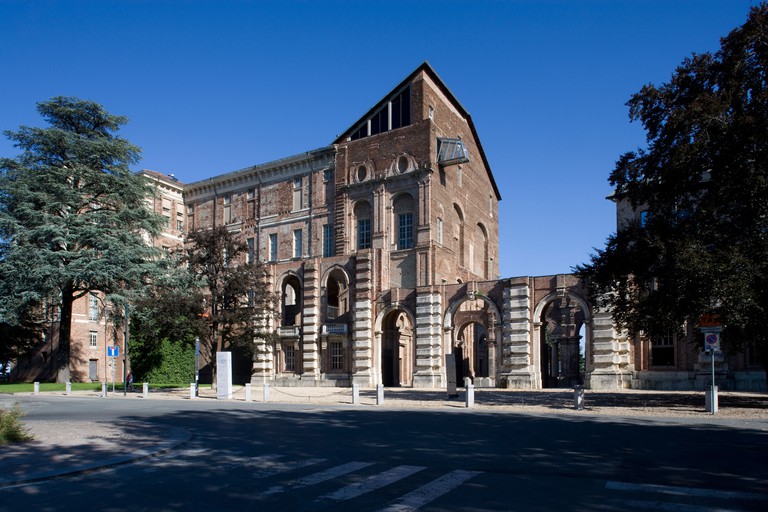 © Antony SOUTER / Alamy Stock Photo
In July 2017 it was announced that Castello di Rivoli (the first museum in Italy to be dedicated to contemporary art) would be loaned the £450m collection of the late Turin resident, Federico Cerruti. The museum’s existing collection of contemporary art is now complemented by great medieval, Old Master and modern paintings, which will be incorporated into temporary exhibitions and displays. The building is a former royal residence of The House of Savoy, but has foundations that date back to 1159, which makes the museum a must-visit for art lovers and history buffs alike.
Open In Google Maps
Piazzale Mafalda di Savoia, Rivoli, Piemonte, 10098, Italy
+390119565222
Visit Website
Give us feedback

Historical Landmark
Facebook
Email
Twitter
Pinterest
Copy link
Share
Map View
This is a central neighbourhood, located between Porte Palatine, via Garibaldi and Corso Siccardi, where an ancient Roman settlement once stood. The network of small streets are made up of beautiful historic buildings that are home to interesting shops, bars and restaurants, as well as remnants of the former Roman structures. The area always has a buzzy atmosphere, but particularly in the evening. Quadrilatero Romano is mostly pedestrianised, so it is the best place in the city to wander aimlessly until you’re ready for an aperitivo.
Open In Google Maps
Quadrilatero Romano, Torino, Piemonte, Italy
Give us feedback 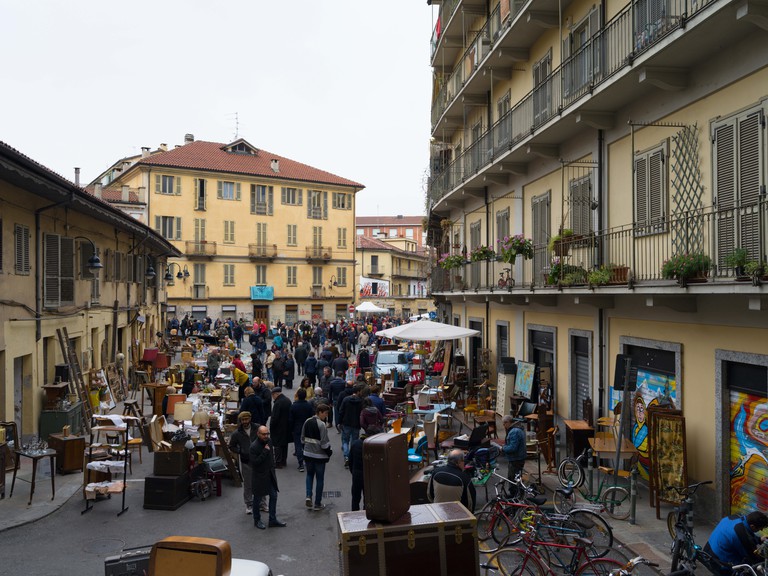 Every Saturday morning and every second Sunday of the month (on Sundays there is more on offer), this famous flea market draws visitors from all over Italy. A maze of more than 250 stalls stand alongside long-standing antique shops and appealing cafés. You can find everything at Balon – antique and retro furniture, collectable toys, local lace and vintage clothing, contemporary crafts. It is located just behind Porta Palazzo in the newly fashionable Aurora neighbourhood. The market opens at 8am, and if you want to beat the crowds it is advisable to arrive early.

Market, Italian
Facebook
Email
Twitter
Pinterest
Copy link
Share
Map View
Cortile del Maglio is a large, covered square within a former military complex in the Aurora district of the city (read about the history here). The industrial architecture makes it ideal for holding performances, events and exhibitions, so it has now become a lively hub for creativity and culture. It becomes part of the Balon Flea Market every weekend and regularly hosts live music, theatre and artisanal food and drink fairs.
Open In Google Maps
18 Via Vittorio Andreis, Torino, Piemonte, 10152, Italy
Visit Website
Give us feedback 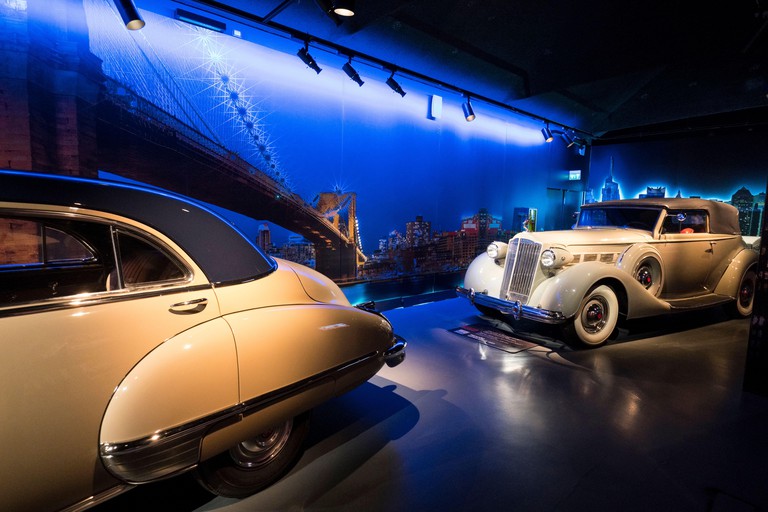 © Andia / Alamy Stock Photo
Book Now
Turin has a long and prestigious history of car manufacturing and if you are a car fanatic, this museum is a must-see. More than 200 original vehicles from 80 different car brands tell the history of the automobile. It also investigates the future of the car industry and new engineering technologies. Visitors can see iconic models, prototypes that were never realised and historically important game changers, as part of interactive displays. Museo Nazionale dell’Automobile is one of the world’s most famous museums of its kind, and the vast buildings are architecturally impressive in their own right.
Open In Google Maps
40 Corso Unità d'Italia, Torino, Piemonte, 10126, Italy
+39011677666
Visit Website
Give us feedback 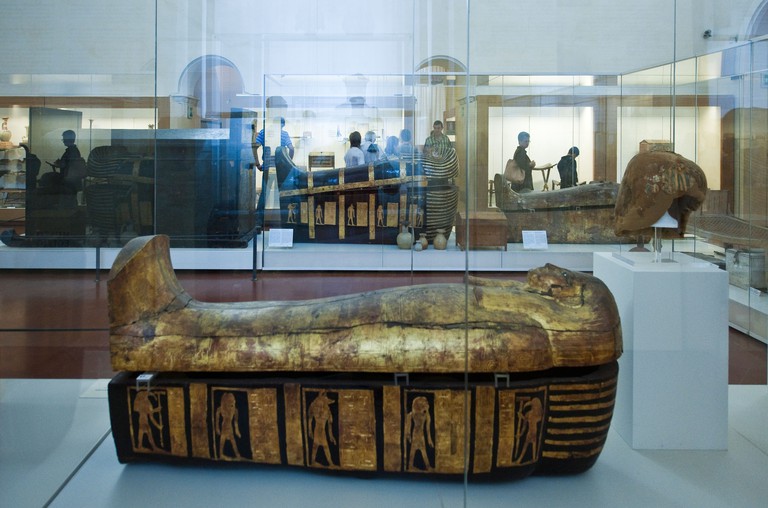 © giuseppe masci / Alamy Stock Photo
Book Now
Turin’s Museo Egizio (Egyptian Museum) is revered globally for its vast collection of Egyptian antiquities and academic research credentials, rivalling the British Museum in London, the Louvre in Paris and the Papyrus Collection in Berlin. It was established 1824 from the collection of artefacts that French General Consul, Bernardino Drovetti, had amassed during his time in Egypt. In recent years it has undergone significant renovation and now incorporates more interactive and immersive displays, including 3D films that bring to life the brilliance of Ancient Egyptian culture. The museum’s centrepiece is the Tomb of Kha – a tomb for a tomb builder to the pharaohs, which dates back to 3,500 BC. The level of preservation is outstanding, containing sarcophagi, furniture and statues, as well as items such as salted meat and a bowl with traces of tamarind and grapes.
Open In Google Maps
6 Via Accademia delle Scienze, Torino, Piemonte, 10123, Italy
+390114406903
Visit Website
Give us feedback

Historical Landmark
Facebook
Email
Twitter
Pinterest
Copy link
Share
Map View
In the 18th century, under the rule of Vittorio Amadeo II, Turin was facing likely defeat by the French army. The story goes that while visiting a small chapel on the tallest hill overlooking the city, Amadeo vowed to build a church if Turin was victorious. And so the church was built on the Superga hill with stunning views over the city and wider landscape. From here you can see peaks of the Alps such as Monviso, Orsiera, Rocciamelone, Gran Paradiso, Apostoli, Torre di Lavina and Monte Rosa with Doufour peak. Architect Filippo Juvarra’s structure is dominated by the soaring dome, supported on four grand Corinthian columns. The interior is relatively simple (in baroque terms), and the absence of extravagant decoration emphasises the beautiful lines of the arches and barrel vaults.
Open In Google Maps
73 Strada Basilica di Superga, Superga, Piemonte, 10132, Italy
+390118997456
Visit Website
Give us feedback
Give us feedback