11 Unusual Things to Do and See in Verona 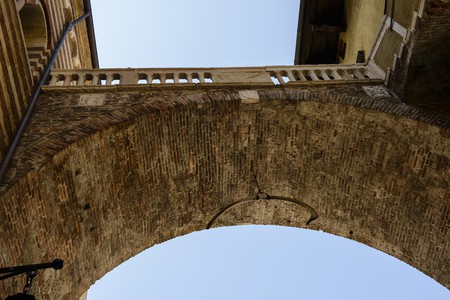 This northern Italian city is now home not just to Veronese old-timers, but also all kinds of students, artists, young professionals and immigrants from across the globe. For those who want to go off the sugary, beaten path of Romeo and Juliet, our guide to the city will take you through everything from ancient curiosities to hip young spaces for contemporary cultural ferment.

A street cart serving Calabrian food for vegans parks along the Via Ca’ di Cozzi on Saturdays. You’ll find all kinds of typical Calabrian specialties with a vegan twist like hops mayonnaise, whole grain focaccia, olive tapenade and stuffed seitan with porcini mushrooms. You can buy one of their products to take home or get a taste of one of their gourmet sandwiches on the spot – certainly worth the search for curious foodies.

Culture, food and books collide to form a delightful alternative bookshop called Libre!, exclamation mark included. There’s a well-curated selection of all kinds of books, favoring small and independent presses, but is much more than just a great bookshop. Libre! also has a cafe featuring a a selection of organic products from local farms and a cooperative space that you can subscribe to for events, exhibitions and workshops. Come for a slice of radical-chic Veronetta student culture and stay for the good reads and good eats.

Come by Piazza San Zeno on Sundays and you’ll find a real cornucopia of knick-knacks to pleasurably browse through. Old postcards, secondhand clothing, used books and home furnishings will be piled high in the vendors’ stalls. You’ll enjoy chatting with the zany local characters who populate these events, and discover treasures like Moroccan lamps and Murano glass jewelry for good prices.

The tongue-in-cheek fun of drag shows, themed Saturday nights, disco kitsch and go-go boys contrasts with a totally serious vibe of transgressive pleasure-seeking. This place has the dangerous distinction of being perhaps the only LGBT-centered joint in quite a conservative city.

While there’s nothing particularly special about this little-known church just outside the city, it’s located high up on a hill with some incredible views of Verona. You’ll see the river winding through the historic center of the city, and Verona’s buildings will seem even more gorgeous from a distance. It’s a perfect morning walk.
Santuario della Madonna di Lourdes, Viale dei Colli, 27, 37128 Verona, Italy, +39045 834 4946

In the heart of Verona, along the arch that leads out of the Piazza delle Erbe towards the Piazza dei Signori, there is a whale rib mysteriously hanging from a chain under one of the arches. Its history goes back at least three centuries and perhaps more. Though there’s a few different theories as to why it got there, its origin story is unclear. It could be a relic brought back from the Crusades, a fossil taken from the mountains, or a dramatic piece of advertisement for the old pharmacy located underneath. The legend goes that this bone will fall on the first person to pass under it who has never told a lie, so feel free to test the theory.

Dedicated to Italian scientist and engineer Guglielmo Marconi, this little museum has a delightful collection of antique radios. It’s a great place for anyone who enjoys little curiosities and delightful old things, as well as history and science buffs.

Food has become a bit of a battleground for nationalists in Italy, with far-right mayor Flavio Tosi introducing a ban last year on the opening of new restaurants that sell mostly “ethnic” food. The city is becoming more and more multicultural, with 12% of the population hailing from other countries, while the politics of the city are steering towards a touch of xenophobia. Those who like a bit of diversity for their eating might want to take a walk through Veronetta, the neighborhood of students and recent immigrants, or make a reservation at Tabule for their great Lebanese tasting menus.

Church
Facebook
Email
Twitter
Pinterest
Copy link
Share
Map View
Hidden in the basement of a church called ciSanti Apostoli, this little-known chapel dedicated to the Saints Teuteria and Tosca was consecrated back in the 8th century, making it the oldest church in the Veneto. It’s a small, dark space full of the kind of beauty that only accumulates with the passing centuries.
Open In Google Maps
2 Piazzetta Santi Apostoli, Verona, Veneto, 37121, Italy
+390458036936
Visit Website
Give us feedback

Cinema
Facebook
Email
Twitter
Pinterest
Copy link
Share
Map View
Leave your 3-D glasses at home; this is a place for serious film fans to watch a well-curated selection of movies from all over the world. Founded in 1947, the Circolo has been running for 70 straight seasons. With a subscription, you can also take part in the encounters with filmmakers and various workshops.
Open In Google Maps
13b Piazza Santo Spirito, Verona, Veneto, 37122, Italy
+390458006778
Visit Website
Give us feedback

A bar and social center sits in the heart of Verona’s student district. Malacarne’s decor is full of little bits and bobs taken from flea markets and repurposed Frankenstein-style into lamps and fixtures. You’ll find many students and quirky locals here, having a chat, playing board games and drinking cheap craft beer. They also put on stellar live music and events.

"Body of reverbs" was once called "Garabato" and it was strictly a performative practice. Here s when we were in Verona at #malacarne crushing the palm of @kdnppr with @pauladelgadomua and @a_brunello , Pic by @giacomostreliotto #bodyofreverbs #servadio #new #ritual #installation #tattoo #posttattoo #noise #sonification #analog #experimental #feedbacks #witchcraft #drone #powerelectronics #metatattoo #harshnoise

This powerhouse of a workshop in Borgo Roma is named after the 20th century art movements who sought to unite art with a social, not only sells beautiful, one-of-a-kind wooden home furnishings, but also does incredible, innovative work. The space was founded in 2012 by architect Giuseppe Padovani and his daughter Francesca. They give new life to used pieces of wood, as well as teaching traditional carpentry skills to those who have fallen on hard times.