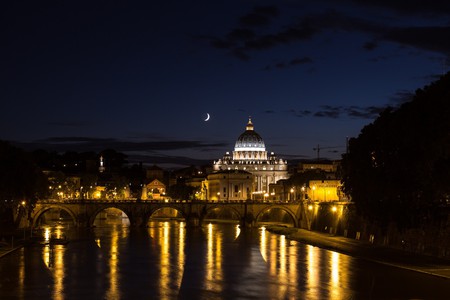 Rome and romance is a match made in heaven. The cobbled streets, breathtaking skyline and lustrous fountains all provide a stunning backdrop to any romantic rendez-vous but the city has so much more to offer than just clichéd candlelit dinners. From comedy nights to painting parties, here are 11 unusual ideas to impress a date in the Eternal City.

See the skull of St. Valentine

Beheaded in the third century for helping Christian couples marry, St. Valentine was buried near Ponte Milvio but later dug up and his relics enshrined in various churches across Europe. His skull (apparently) stayed in Rome and is now on display in a gold-framed glass reliquary at the Basilica di Santa Maria in Cosmedin. What could be more romantic? 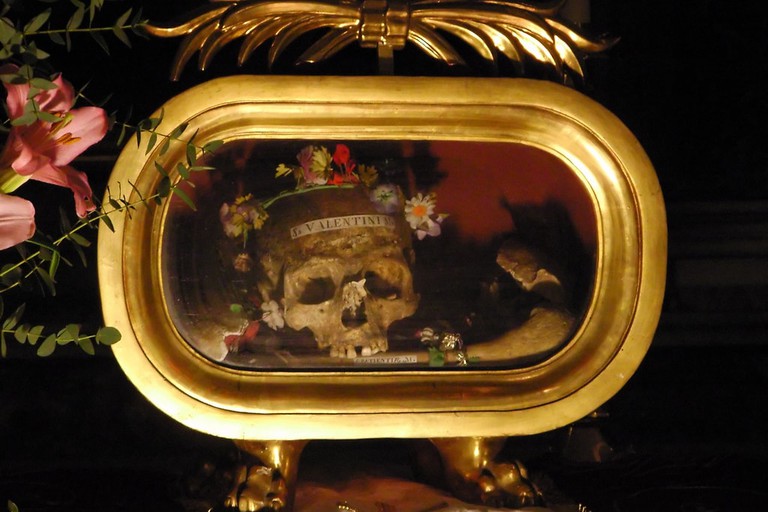 For lovers and lovers of chocolate. The specialty of this 1920s chocolate factory turned café-restaurant is a rich, thick, Italian-style hot chocolate – no sugary marshmallow embellishments needed here. Before leaving, select a handful of beautifully packaged artisanal chocolates to gift to that special someone.

Organised by artist and New York native Lauren Lombardo, Paint & Wine evenings offer hands-on creativity in a relaxed, social setting. There’s no experience necessary and teacher Lauren is on hand to provide tips and advice to ensure even the most unaccomplished novice creates their very own artwork at the end of the session. A sure-fire way to impress any creative-minded love interest. 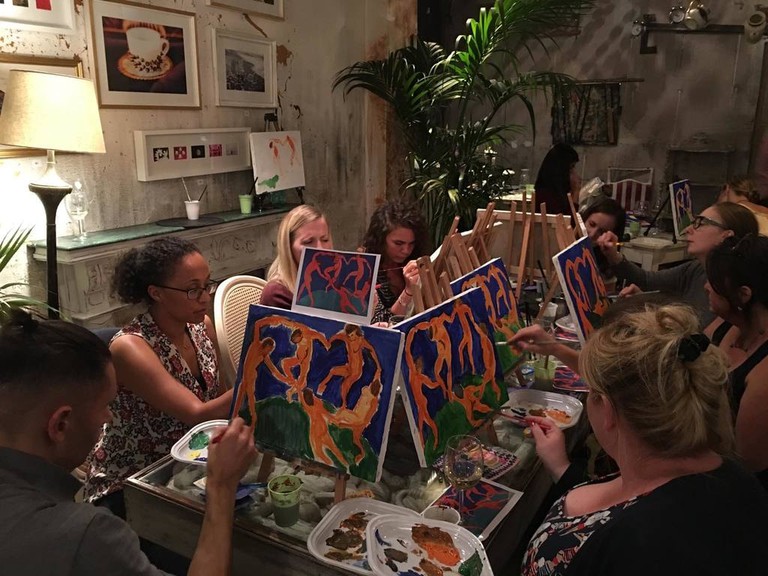 Laughter triggers the release of endorphins, the body’s feel-good chemical, so an evening of one-liners and off-the-wall skits makes perfect sense for a first date. Share some laughs at Rome’s Comedy Club, the only English stand up show in Rome. Check the Facebook page for event details.

Cheer on AS Roma

The adrenaline rush of watching 22 men run around a pitch can be intense – and a thrilling experience to share. Get two tickets to Stadio Olympico to see De Rossi and his boys in action and just pray to the football gods your date isn’t a Lazio fan. 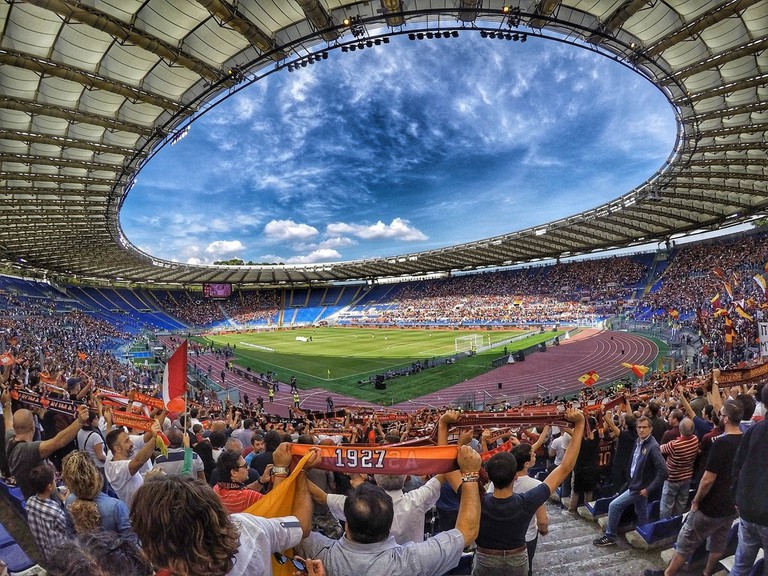 Get practicing those vocal exercises because open mic night is calling. Expect performances from undiscovered local talent and equally entertaining – if less aurally pleasing – late-night revellers. A number of venues across the city set up the microphone, and sometimes guitar or piano too, including Abby Theatre near Piazza Navona, Le Mura in San Lorenzo and The Fiddler’s Elbow, a few steps from Termini.

Architectural Landmark
Facebook
Email
Twitter
Pinterest
Copy link
Share
When it comes to romantic vistas Rome is not short of places to go and couples flock to sweet spots like the Gianicolo, Giardino degli Aranci and the Pincio. Lesser known is the view of St. Peter’s afforded from Via Piccolomini, a quiet street not far from Villa Doria Pamphili. Drive towards the basilica, it appears to shrink and withdraw into the background. Drive away and the basilica returns to its former grandiose stature.

During the balmy summer months the enchanting Tiber Island transforms into an open-air cinema. The annual Isola del Cinema film festival screens the best international and Italian-language movies of the season, from both emerging and critically acclaimed directors. Perfect to watch under the stars with your beau. 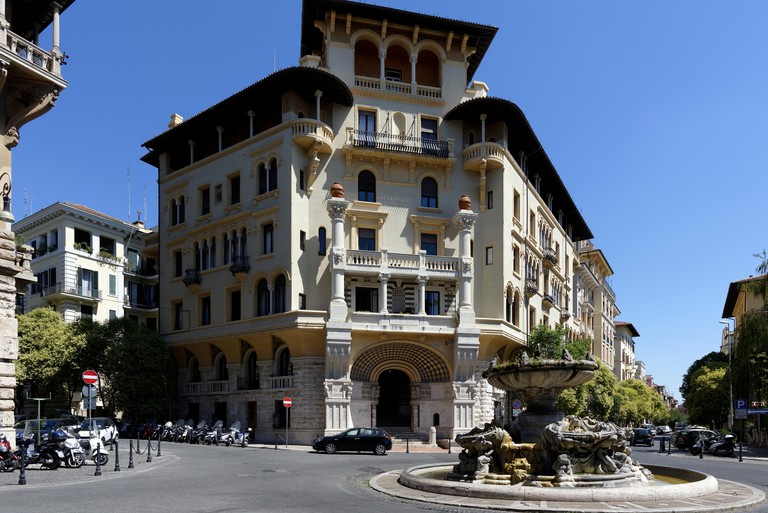 Quartiere Coppedè is a unique neighbourhood with a whimsical feel in Rome | © klifas Steven / Alamy Stock Photo
Take a passeggiataalong the fantastically charming streets of the Quartiere Coppedè. Designed by Gino Coppedè between 1913 and 1927, this tiny neighbourhood contains around 40 buildings in an eclectic mix of classical Greek, Roman Baroque and Art Nouveau styles. Look out for ornate towers, intricate mosaic-archways and even a grand outdoor chandelier.

Villa Borghese might be the obvious example for romantic picnic but it’s well worth going further afield. Head south to the Parco degli Acquedotti and you’ll be rewarded with less crowds, expansive open countryside and the ruins of not one but two ancient aqueducts. 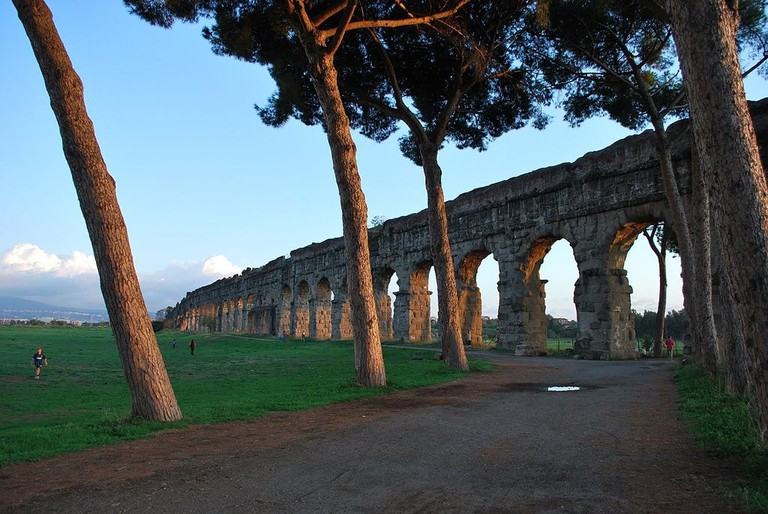 Comprised of the remains of four Roman temples and the Theatre of Pompey – where Julius Caesar was murdered in 44BC – Largo di Torre Argentina is a fascinating historical site. Add in around 150 kitties who frolic, lounge and stalk among the ruins and it becomes a perfectly charming spot to take any cat lover for the afternoon. If it’s open, pay a visit to the cat sanctuary on the south side of the square and meet the gattare (cat ladies) who care for the local feline population. 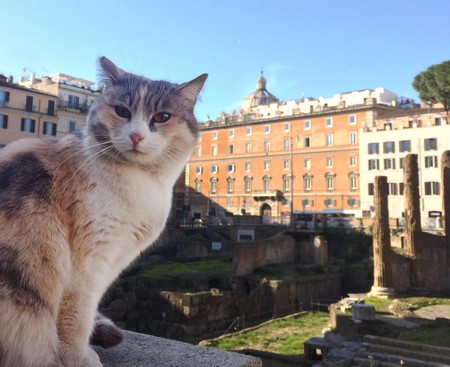 One of the cats of Largo Argentina | © Emma Law