Hidden Gems in Rome That Even Locals Don't Know About 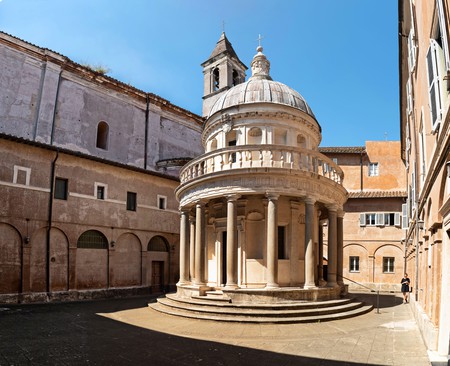 With a history that spans millennia, Rome is a city that takes a lifetime to discover and contains near-infinite sights and monuments across its vast territory. While many of these are well-known and top bucket lists, the Eternal City has its share of secret places that even the locals overlook. Read on to discover the most intriguing hidden spaces in Rome for a different perspective of the capital.

You can enjoy a guided bicycle tour of Rome on Culture Trip’s action-packed small-group Northern Italy adventure, led by our local insider. 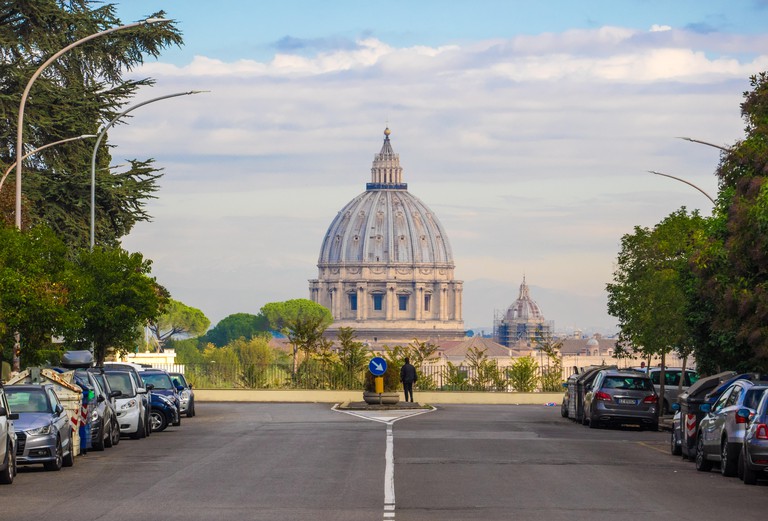 Visitors looking to experience Rome’s hidden gems will have stumbled upon Borromini’s famous prospettiva within Galleria Spada but there’s another lesser-known optical illusion that is worth a visit. Tucked away behind Villa Doria Pamphili park, Via Piccolomini is an unassuming street that creates a fascinating perspective onto St. Peter’s dome: as you drive towards it, it seems to recede into the background and become smaller in the distance but as you drive away, it seems to expand in size and rise up from below. You’ll often see scooters driving around in circles late at night to experience this interesting phenomenon. 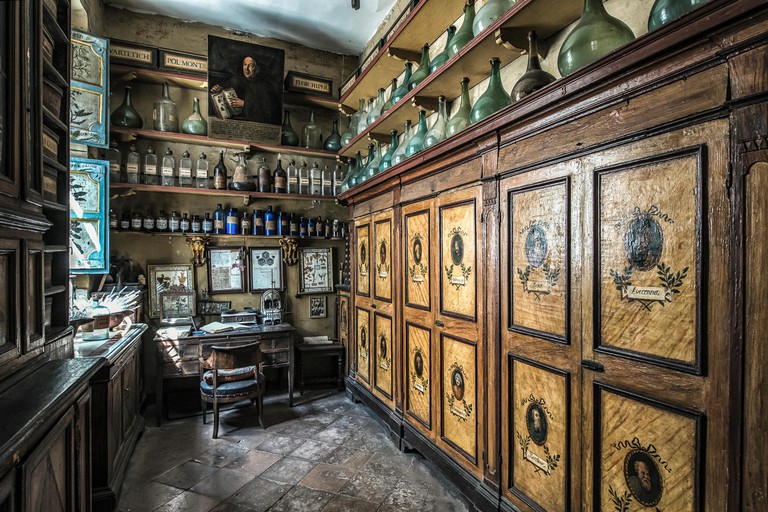 Piazza della Scala is a quaint ivy-ladden piazza in Rome’s bustling Trastevere neighborhood and is best known for its cafés and trattorias, though it houses a real treasure within it. The Farmacia Santa Maria della Scala pharmacy, built into the cloister of the nearby church, has modern medicines today but a visit to its upper floor lets you step back to the 17th century when it was the pharmacy of the Papal Court. It is still run by Carmelite monks who guide you through the evocative space, filled with painted vases, hand-labeled bottles and frescoed ceilings. Tours must be arranged by phone in advance. 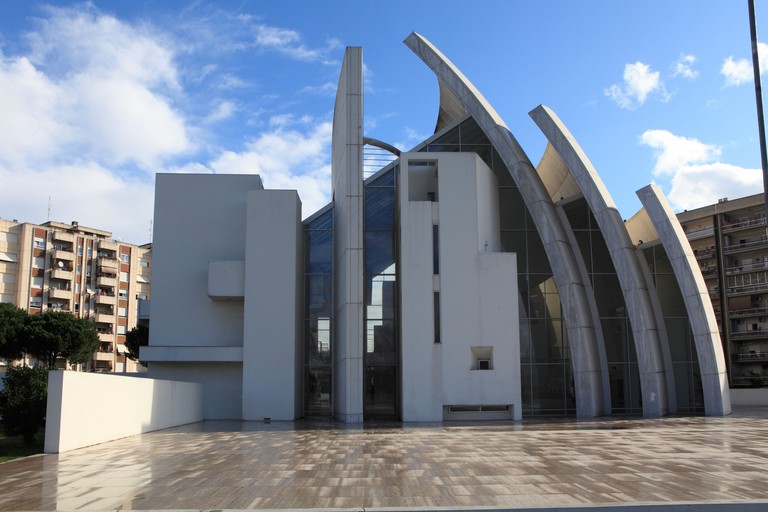 American starchitect Richard Meier has left his imprint on Rome in the form of two contemporary buildings: the well-known Ara Pacis museum containing a 2,000 year old Altar of Peace, and the often overlooked Jubilee Church in the city’s eastern Tor Tre Teste neighborhood. Built between 1996 – 2003, it is an unusually contemporary church that was designed to resemble a ship with three curved walls and skylights that let light flood into the space. The church was commissioned as part of Pope John Paul II’s Millennium project to mark the Jubilee of 2000. 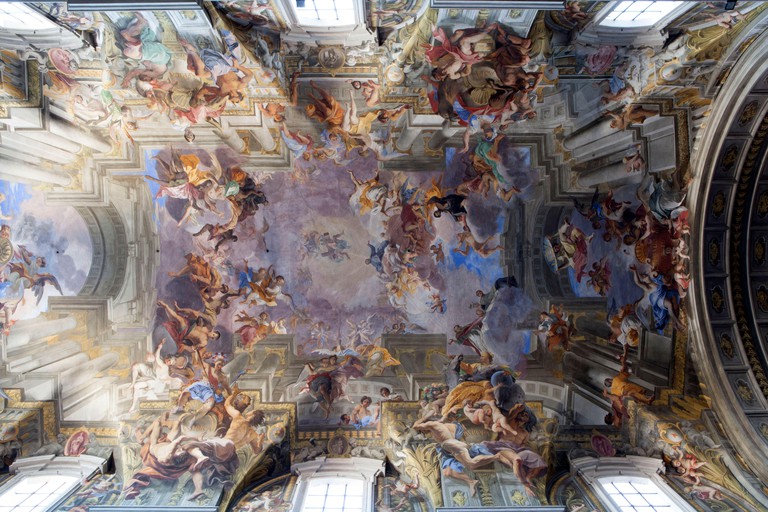 Church of the Gesù, the mother church of the Society of Jesus, has impressive trompe l’oeil effects on its ceilings but an even more peculiar visual effect lie tucked away in the next-door Rooms of St. Ignatius, the founder of the Jesuit order. Decorated by Baroque painter Andrea Pozzo, the ornate Pozzo Corridor was inspired by the Galleria Colonna within nearby Palazzo Colonna and features scenes of the life of St. Ignatius. It is fascinating because it was a relatively contained corridor that gives the impression of being much longer because it is painted as a slant: indeed, as you approach figures, they become distorted and stretched when seen from up close. 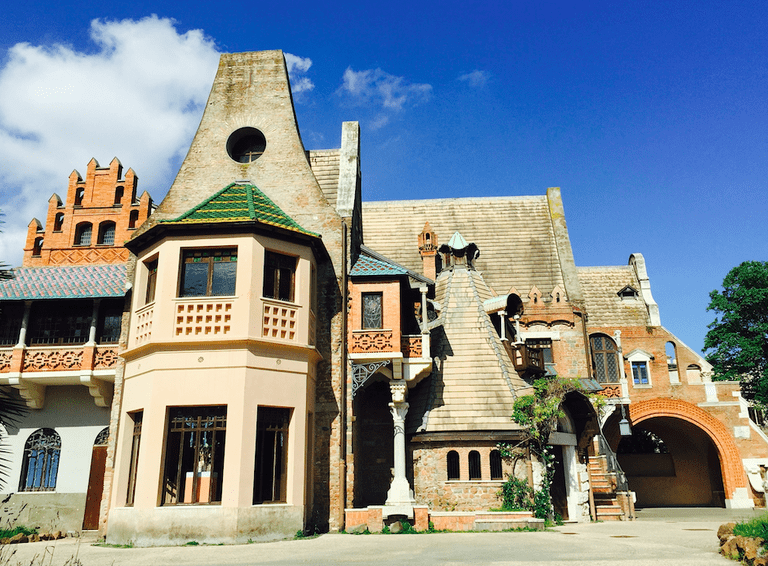 Courtesy of Camilla Colavolpe
Casina delle Civette is a whimsical house-museum nestled within Rome’s Villa Torlonia park. Designed by neoclassical architect Giuseppe Valadier, the park was home to the noble Torlonia family and is best-known for being the state residence of Mussolini from the 1920s onwards. The park has numerous interesting museums but the most unusual is certainly the Casina delle Civette, or ‘House of the Owls’, which was built to resemble a Swiss cabin and features stained glass windows with animal figures, numerous loggias, porticos and turrets. 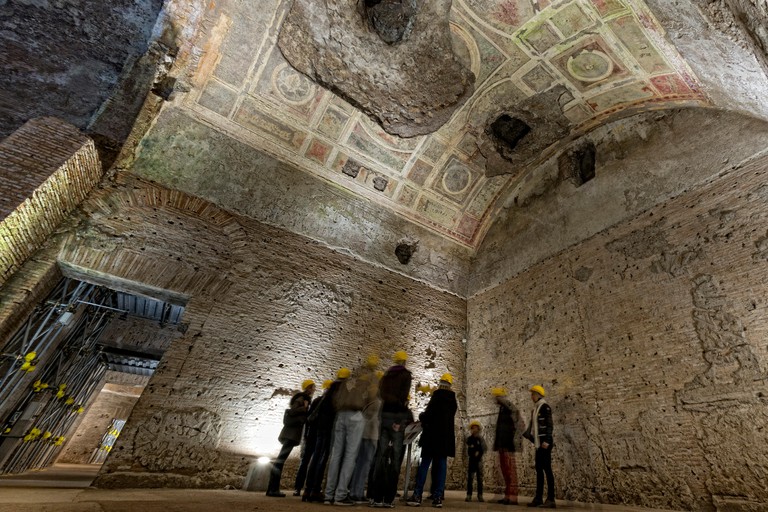 Emperor Nero’s Golden House is an incredible archeological site that has only recently been opened to the public for guided tours on weekends to help fund ongoing restorations of the ancient villa. This enormous palace dates back to 64 AD and was built after a great fire raised much of the city to the ground; it extended through many of Rome’s famous Seven Hills, including the Palatine, Esquiline, Oppian and Caelian hills and contained as many as 300 rooms. It was covered in frescoed, gold leaf, stucco and precious stones, making it one of the most sumptuous palaces ever built in history. 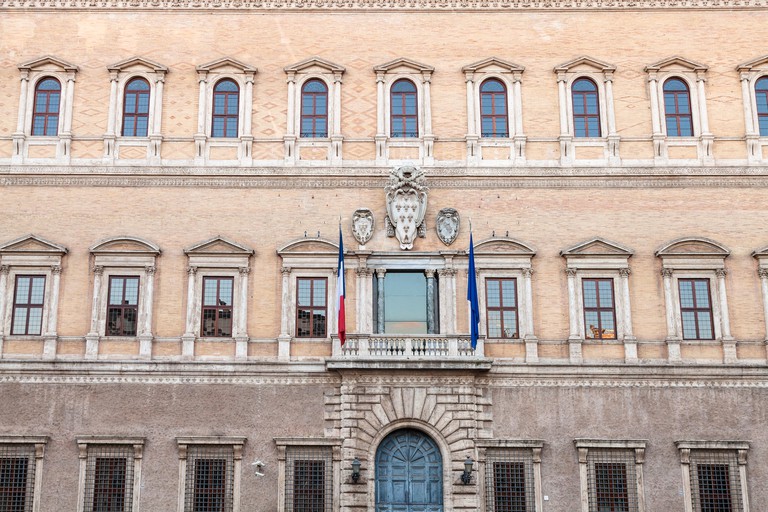 Just behind touristy Campo de’ Fiori lies the elegant Piazza Farnese and its (namesake) Palazzo Farnese, the seat of the French Embassy in Rome and one of the most important High Renaissance villas in all of Rome. It was designed in the early 16th century for the influential Farnese family and features important artworks, including Annibale Carracci’s elaborate The Loves of the Gods ceiling fresco. The secret of Palazzo Farnese lies in the fact that the building is open to the public through guided tours, with English tours taking place each Wednesday at 5pm. 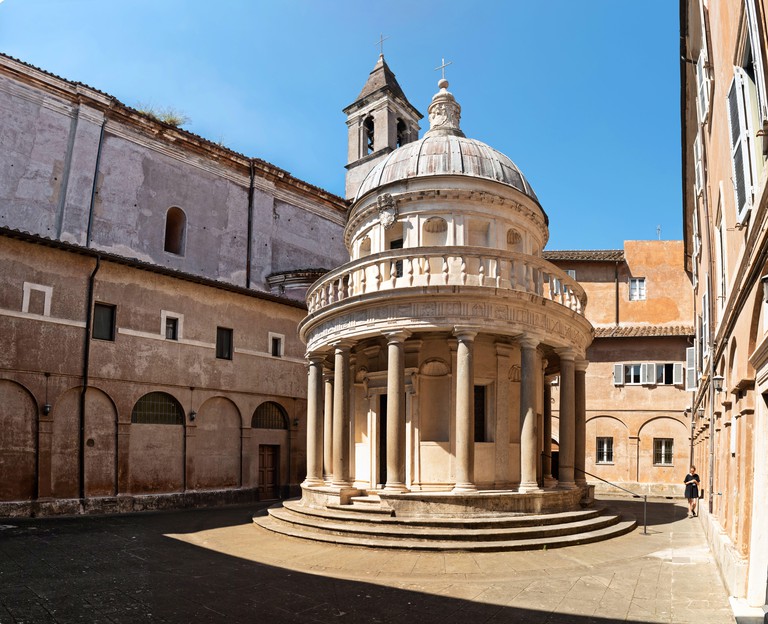 The Tempietto del Bramante, located within the courtyard of San Pietro in Montorio up in the Gianicolo neighborhood, is one of Rome’s greatest examples of High Renaissance architecture. It was commissioned by the Ferdinand and Isabella of Spain, named ‘Catholic King and Queen’ by Pope Alexander VI in 1494, for their son John who died prematurely in 1497. The circular temple, which reflects Brunelleschi’s harmonious style, features Tuscan columns, an ornamental molding with a curved balcony, and a dome. Although it is one of Rome’s architectural jewels, it is an often overlooked attraction in the city. 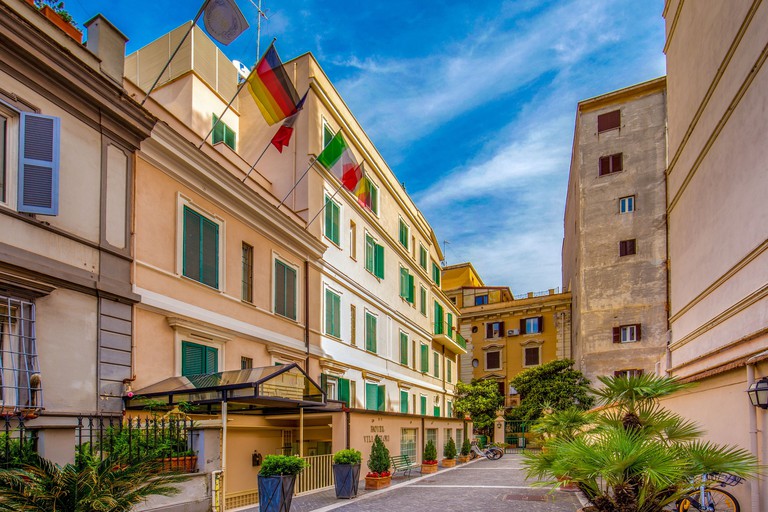 Located in Rome’s northern Flaminio neighborhood, the tiny residential street of Via Bernardo Celentano is a real off-the-beaten-path gem. With its multicolored Liberty-style row houses featuring private gardens and fences, it resembles a ‘little London’ more than an alley in the Eternal City. The street was designed by architect Quadrio Pirani in the early 20th century under the leadership of Mayor Ernesto Nathan who wanted Rome to become a proper European metropolis. The urban project never spread beyond this little street but it has been well-preserved and is one of the city’s best kept secrets.

Art Gallery
Facebook
Email
Twitter
Pinterest
Copy link
Share
Located in San Lorenzo, Pastificio Cerere is an old factory that produced pasta in Rome for over 50 years. Named for the goddess of fertility Ceres, the factory was founded in 1905 and helped feed the capital during the two World Wars. Production ceased in the 1960s and the factory was reopened as a multifunctional artist space a decade later. Today, the Pastificio Cerere Foundation contains artist and design studios, artist ateliers, galleries and a photography school. The lower level also houses the well-regarded Pastificio San Lorenzo restaurant. 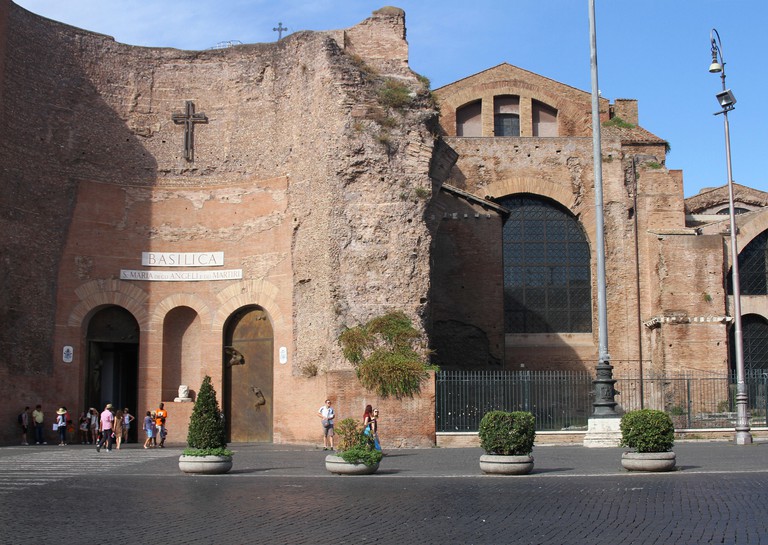 Santa Maria degli Angeli e dei Martiri is one of the most fascinating basilicas in Rome. The church facade is unassuming until you realize it is a fragment of the frigidarium, or cold pool room, of the ancient Baths of Diocletian. These baths were the largest in ancient Rome, though this fact is difficult to comprehend because they have been incorporated into streets, buildings and piazzas. Stepping inside the church gives you an idea of their size: the basilica, which was designed by Michelangelo in the 16th century, features a dominant transept, meaning the church extends horizontally rather than vertically – a truly unusual effect, due to the fact that it was built within the original bath structure.