10 Things You Didn't Know About the Pantheon, Rome

Despite receiving millions of tourists a year there are still many things that visitors don’t know about the art, architecture and history of the Pantheon, the Eternal City’s most stunning ancient temple. Here are 10 fascinating facts about one of Rome‘s best-loved monuments.

It is not the first Pantheon

The current Pantheon is actually the third incarnation on the same site. The first was built by Marcus Agrippa in 27 BC but later burned down, it was reconstructed by Emperor Domition but was struck by lightning and subsequently burned down again. The present version, which has survived almost 2000 years, was built by Hadrian between 118-128 AD. Hadrian reused the original inscription attributing the building to Agrippa which for a while led to confusion over the exact date of construction.

The oculus is open

When the Pantheon was built the only source of light was the oculus in the centre of the dome. The opening measures 8.2m in diameter and is also referred to as ‘The Eye of the Pantheon’. A clever lighting trick is played out on 21 April, the founding date of Rome. At midday the sunlight hits the metal grille above the door, filling the entrance way with light. This would have illuminated the emperor in ancient times, reflecting his perceived status as a god on earth. Another beautiful effect takes place at Pentecost when rose petals are sprinkled through the oculus after the annual mass. Obviously being open to the elements means it also rains inside the Pantheon but a gently sloping floor and 22 well-hidden holes help the water to drain away. 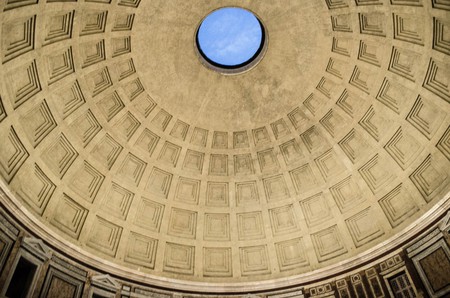 It was once covered in bronze

The dome of the Pantheon was originally covered in bronze, which would have made the skyline of the city sparkle in the sunlight. However throughout the Middle Ages materials were gradually stripped away to be utilised elsewhere. Pope Urban VIII, who was a member of the Barberini family, famously took the bronze from the Pantheon’s portico in 1631 to construct cannons for the Vatican, giving rise to the saying ‘quod non fecerunt barbari, fecerunt Barberini’ (what the barbarians didn’t do was done by the Barberini). 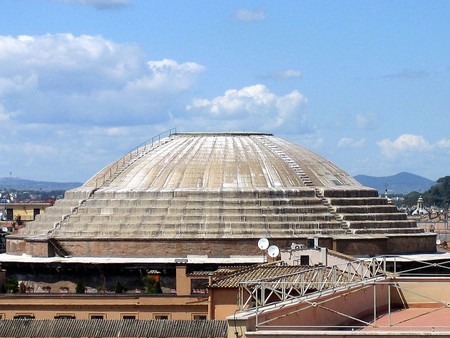 It has a record-breaking dome

The Pantheon dome, which measures 43.2m, held the record for the largest dome in the world for over 1300 years until Brunelleschi (who studied the Pantheon for inspiration) built the Duomo in Florence. However, to this day it is still the largest unreinforced concrete dome in the world. Hadrian achieved this by gradually decreasing the thickness and using lighter volcanic materials such as pumice and tufa as it gets higher. The coffers in the ceiling also help to minimize the weight.

It has perfect dimensions

The building precisely follows the rules of Classical architecture laid out by Vitruvius, creating an aethestically pleasing form. At 43.2m, the height of the building is exactly the same as the width, meaning that a perfect sphere would fit inside. This gives the Pantheon the impression of balance and harmony.

It is home to some famous historical figures

The Pantheon is the final resting place of several notable people, including the first two kings of unified Italy, Vittorio Emanuele II and his son Umberto I who is placed in front of his wife Queen Margherita of Savoy (for whom pizza margherita was named). The tomb of renowned painter Raphael is also found here. Raphael requested to be buried and after his death in 1520 his wishes were met and he was placed in a marble sarcophagus inscribed with a Latin inscription which translates as ‘Here lies Raphael, by whom nature herself feared to be outdone while he lived, and when he dies, feared that she herself would die’. 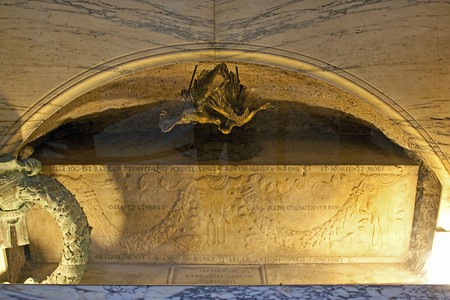 It is now a church

In the year 609, the emperor Phocas gave the Pantheon to Pope Boniface IV who consecrated it as a church. However, in doing so all pagan imagery was removed and replaced with Christian decoration. Holes can still be seen on the pediment of the façade where pagan bronze adornments have been stripped.

The name comes from Greek

The word Pantheon is is derived from the ancient Greek words ‘pan’ (all) and theos (god). The temple was dedicated to the worship of all gods. This is reflected still today in the name of the present-day church which is Santa Maria e Martiri (St Mary and all the Martyrs).

It used to have bell towers

In the early 1600s, a modification by Pope Urban VIII (which is often misattributed to Bernini) saw two bell towers added to the sides of the façade. These were much derided by the Romans who nicknamed them ‘the ass’s ears’ until they were finally removed in the late 19th century. 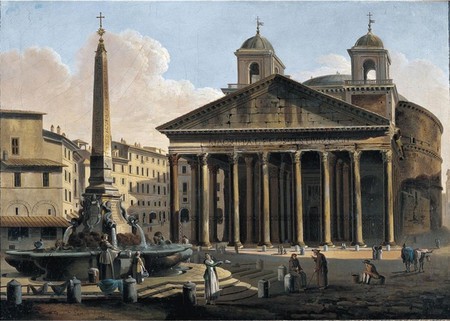 The Pantheon in 1794 with its twin bell towers | © Wikimedia Commons

The columns were transported from Egypt

Each of the 16 massive granite Corinthian columns at the entrance weighs 60 tons. They were quarried in Egypt, dragged 100km to the Nile, placed on barges and shipped up the river and transferred to boats to cross the Mediterranean Sea. Once they arrived at the port of Ostia they were retransferred to barges, pulled up the Tiber to Rome and dragged to the Pantheon construction site to be erected to support the portico.