10 Things To Do Near Piazza Santa Trinita, Florence

Named after the Church of Santa Trinita on the northwest side, the small triangular square is situated in the heart of Florence. Once an isolated area outside of the city walls, it is now a lively, busy district hosting some of the finest Gothic and Renaissance palaces. Here is our guide to enjoying the area to its fullest. 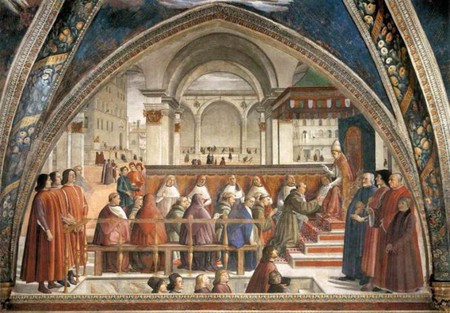 Located in front of the Piazza, Santa Trinita is a Roman Catholic Church and the birthplace of the Vallumbrosan Order. Originally built in a simple Romanesque style, it was later restored under Gothic influences. Explore the chapels and enjoy a rich display of magnificent pieces of art from frescoes to paintings. 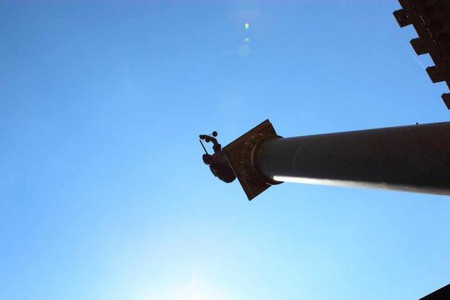 The Column of Justice | © Justin Ennis/Flickr

Located in the middle of the square, the Column of Justice is an ancient Roman column named after the sculpture on its top. The column itself was a gift from Pope Pius IV to Cosimo I, while the figure of Justice was added almost twenty years later in 1581. Gaze at the monument for a few minutes; it will surely help you find your way throughout your sightseeing tour.

Walk down via Tornabuoni

The beginning of the most luxurious pedestrian street in Florence is marked by the piazza. Via Tornabuoni is characterized by the presence of high fashion boutiques, belonging to famous designer brands such as Gucci, Prada, and Burberry, as well as cafes offering specialty drinks and finger foods. Take a walk down the street, look into the large archways of the buildings and travel back to the noble life of Renaissance Florence.

After a walk around the piazza, take a break and discover Tuscan cuisine at a nearby restaurant. Their creative culinary delights accompanied by the exceptional quality of the dishes will exceed even the highest expectations. Don’t forget to taste some of the excellent local wines. 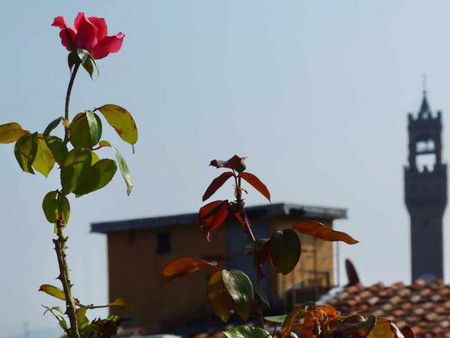 Built during the first half of the 13th century, the tower house known as “Antica Torre di Via Tornabuoni 1” is located beside the church. Being one of the historic tower houses of Medieval Florence, it has managed to maintain the original architectural characteristics. If you are looking for an elegant stay surrounded by a unique atmosphere of charm and history, this is the ideal place.

Right across from the church, a large, Gothic building is located. Palazzo Spini-Ferroni used to be the largest privately owned palace in the whole city and is now one of the most important ones. Salvatore Ferragamo, the famous shoe designer, bought it in 1938, transforming it into the headquarters of his company and the current location of his workshop. Pay it a visit to admire a few masterpieces of Florentine art and don’t miss the museum dedicated to Ferragamo on the underground floor.

Palazzo Bartolini-Salimbeni is the first palace in Florence to be built according to the High Rennaisance style, marking the transition from the Renaissance to Mannerism. Although now it is considered a masterpiece, at the time it was heavily criticized. Pay a visit to the palace, explore the fascinating inscriptions and learn about some exciting legends and stories from the past.

Thanks to their good investments, the Buondelmonti family was one of the most important families in Florence, heavily involved in politics. Stop by the palace to learn about the story of Buondelmonte de’ Buondelmonti’s death, widely known as Florence’s bloodiest murder.

Located at the corner of Via Tornabuoni and Via del Parione, this palace is in fact an assembly of palaces from the 1100 and 1200s, joined under one family in the 15th century. Although the stories about the derivation of the Minerbetti differ, it surely is among the worth-visiting palaces of the district. 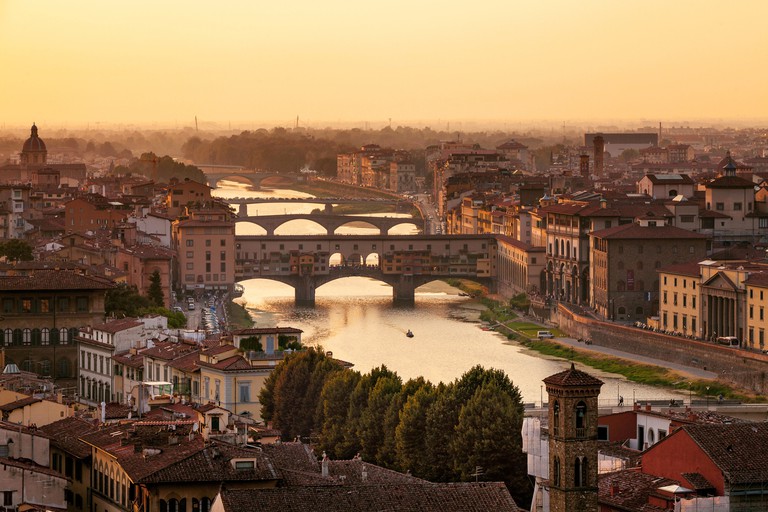 The bridges of Florence at sunset | © RooM the Agency / Alamy Stock Photo
The perfect spot to finish your mini tour around Piazza Santa Trinita is the bridge. Spend the evening watching the sunset over the city, bring your camera to capture the amazing colors, and enjoy some of the most picturesque sights you have ever seen.
Open In Google Maps
Ponte Santa Trinita, Firenze, Toscana, 50100, Italy
Give us feedback
Give us feedback