10 Spring Paintings To Celebrate The End Of Winter 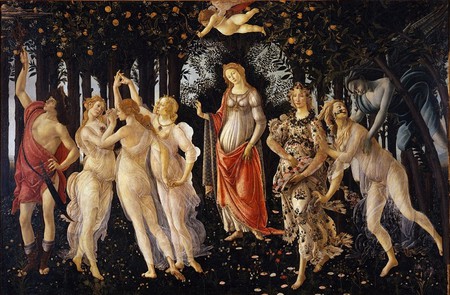 With spring the world is reborn. The trees drip with blossom and the leaves begin to unfurl, promising the onset of summer and the long, drowsy nights to come. For artists it has been a constant source of inspiration since the Renaissance. Here’s a look at 10 great works from artists around the globe that celebrate the season of spring and all the beauty that it brings in its wake.

La Primavera is one of the great works of the Renaissance. It hangs now in the Uffizi in Florence and was commissioned by Lorenzo Pierfrancesco de’Medici. At its center, as in Botticelli’s most famous work, is the figure of Venus. The artist presents six women on the canvas flanked by two men, and above them flies a cherub. They stand in an orange grove, full of ripe fruits. Some critics see the woman to the front, scattering roses before her, as Primavera, the embodiment of spring. Others read the figures on the right as Zephyrus grasping at the nymph Chloris – he married her according to myth, and she was transformed to Flora, goddess of Spring. Some believe that the figure with roses may represent the metamorphosis of Chloris to Flora. Altogether it is a celebration of ripeness and fertility coming back to the world in spring.

Many of Pieter Brueghel the Younger’s works detail the lives of Flemish peasants conducting their everyday labors. And many of his Brueghel’s labors consisted of taking sketches and drawings of his father, Brueghel the Elder, and executing them in paint. Spring is a re-working of his father’s drawing of 1565, and it shows a community coming together to prepare the soils, plant the seeds, and ready the livestock for the summer. We see men and women working on the communal gardens, men at work twining vines to a trellis, and in the distance are groups of people dancing together. With their sleeves rolled up and spades to the ground, the burly men in the foreground demand our attention and admiration in this uplifting image of collective effort. 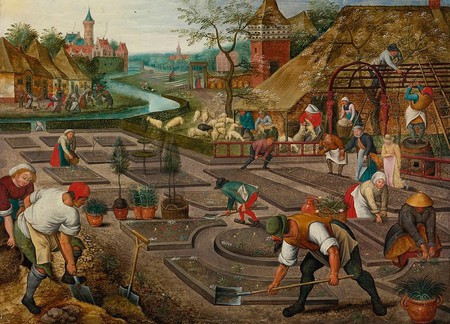 Nicolas Poussin was the great master of French classicism and of the Arcadian landscape in particular. One of his last great works was The Four Seasons, executed for the Duc de Richelieu between 1660 and 1664 and now hung in the Louvre. His vision of Spring takes its cue from Milton and Virgil. We see the earthly paradise of Eden before the Fall, with Adam and Eve in their nakedness pointing to the Tree of Knowledge. The greenery that surrounds them is lush and resplendent, an image of the bountiful Roman landscape of Virgil’s Georgics. And though they look toward the forbidden fruit, we see no serpent in Poussin’s Eden. This is the springtime of the world, long before the winter of the Fall. 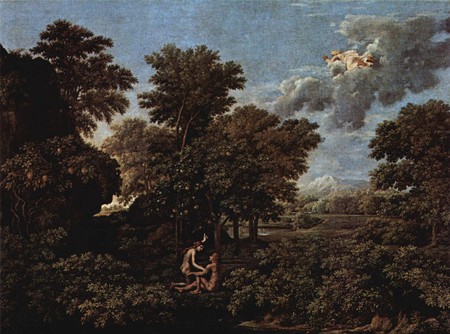 Cherry, apple, peach and plum blossom are images synonymous with the coming of spring. In Japan, blossom has a particular importance as a symbol of the transitory nature of all things, as it blooms in spring in beauty and is gone soon after. Katsushiki Hokusai was one of the greatest of all Japanese woodblock painters. His 1834 series Small Flowers included this work, showing a branch of cherry starting to bloom with the bird perched on a branch, against a background of rich, Prussian blue. The words to one side are a haiku from Setsuman that read ‘A single bird emerges, drenched by dew, from morning cherry blossom’; it focuses the mind on this single moment of stillness, a single moment plucked from the inevitable pull of time. 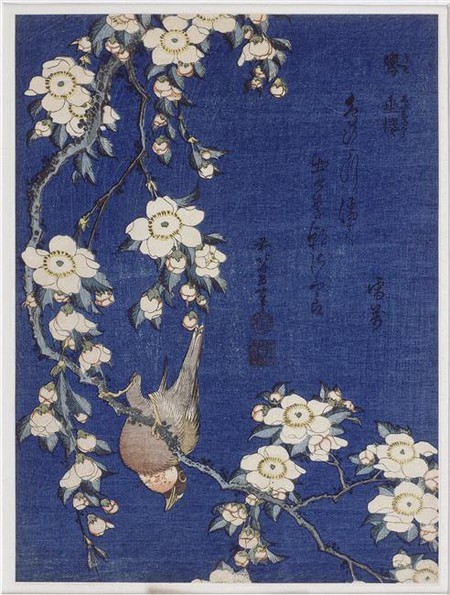 Spring Bouquet is a fairly early work from Renoir, painted when he just 25. His patrons were the La Coeur family, and they supported him through the 1860s. It comes well before his great Impressionist works of the 1870s like the Ball at the Moulin de la Galette, and it shows more of the influence of Gustave Courbet in its precise rendering of reality. Even so, it positively glows with brightness and vitality, bursting with color and life just as the flowers in the painting burst out and over the vase in which they have been arranged. The vase itself, with its blue and white porcelain, is Japanese in style. 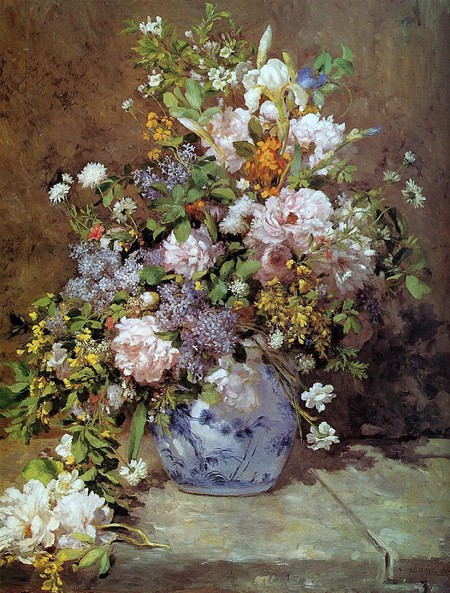 Sisley is perhaps one of the most overlooked artists of the Impressionist group. However, he was there at the start with Pissarro and Monet, a pioneer of the plein-air method and Impressionist aesthetic. And never did he turn away from the Impressionist landscape as Renoir and Monet would at times. His Small Meadows is held in the Tate Collection in London. Sisley was forced to leave Paris in 1880 for financial reasons, moving to the countryside west of the city. His work at this time took on a new vitality. In Small Meadows, he presents a notably restrained image; the trees remain bare, and there’s not a hint of cherry blossom. But in the foreground he depicts his young daughter as a symbol of rebirth, like Botticelli’s Primavera, and as an image of new life. 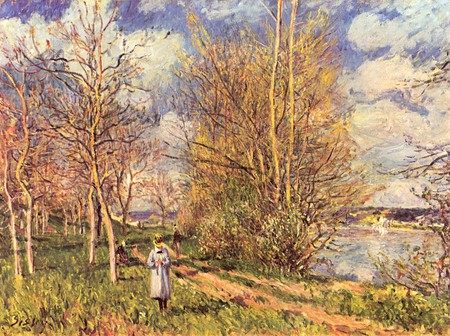 Claude Monet, An Orchard in Spring, 1886

Monet’s Orchard in Spring is sometimes said by critics to be the finest of all Impressionist works of spring. It shows the orchard of the gardens at Giverny in Normandy, attached to the house which he rented from 1883 and later bought outright. Those gardens, with their waterways and bridges, would inspire his later water lily works. In the orchard in 1886 he painted this scene, with its ceiling vault of apple blossom that seems to illuminate the whole canvas. Seated beneath is believed to be the daughter of Monet’s then-mistress, Suzanne Hoschedé, whose mother would become his second wife. It’s a classic example of what was known at the time as ‘Violettomania’. 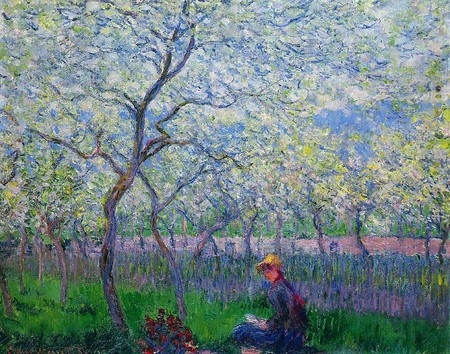 Van Gogh reached Arles in Provence in February 1888. The weather was poor then, but only within two weeks it had changed and the blossom was out on the fruit trees. He began a series of works of trees in bloom, and the blossom become a symbol of spiritual rebirth, an image of beauty spawned after the harsh winter just as a work of art was created only after much angst and frustration. The Pink Peach Tree is one of three works painted that spring, along with Pink Orchard and White Orchard. All of them are held by the van Gogh Museum in Amsterdam. Due to the high winds that spring, van Gogh had to pin his easel to the ground before he could begin work. 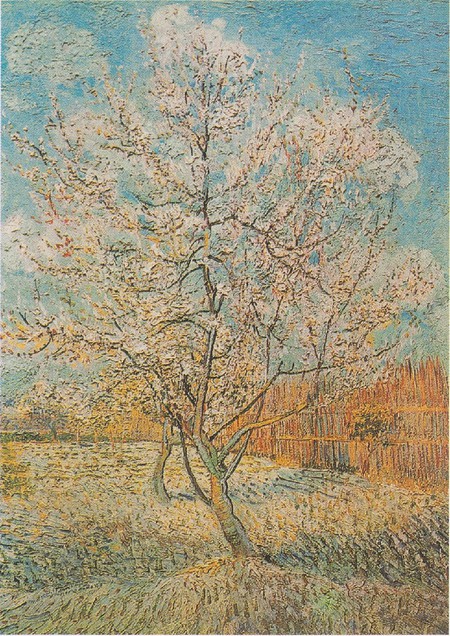 The importance of blossom in Japanese culture is seen in the custom of Hanami, or cherry viewing in which parties head out to see the blossom and picnic amongst the trees. Yoshu Chikanobu was the great artist of the Meiji era which ran from 1868 to 1912. In his triptych of woodblocks, he presents us with the ladies of the Imperial Palace at Chiyoda in Tokyo, as they left the palace to see the cherry blossom in bloom in a practice that has been common throughout Japan since at least the 8th century. The cherry blooms in Japan between March and May, moving north along the length of the islands, and its pace is carefully monitored. 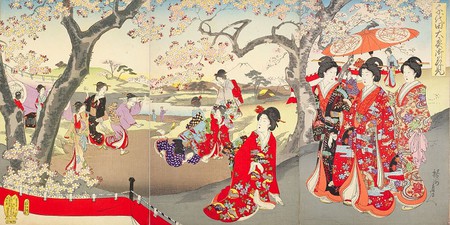 Along with her husband Alfred Stieglitz, Georgia O’Keeffe was a key figure of American Modernism. Many of her images of landscapes and flowers can be seen in the Art Institute, Chicago, including her 1924 work Spring. With Stieglitz, she spent her summers between 1919 and 1927 in Lake George, New York State. In 1929 O’Keeffe began to frequent New Mexico which was to become indelibly linked with her work. In Spring she shows her husband’s studio in simplified form without windows with an extraordinary mass of foliage, full of lavender, mauve and green colors that seem to bubble over and reach up to become one with the clouds.