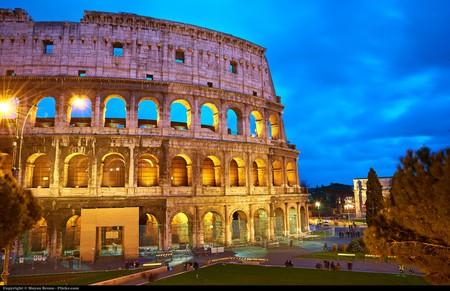 Rome is the heart of the Italian dolce vita, and its panoramic restaurants are the epitome of the sweet life for which the capital has become known. They offer the unique chance to view the city from a number of privileged viewpoints and to try foods from cuisines both local and international. Take a look, and don’t forget your camera.

Eating at Aroma is a truly exclusive fine-dining experience. Its terrace, situated on the top floor of the 17th-century Palazzo Manfredi looks out directly onto the Colosseum from the east (we recommend you book a table for dinner to watch as the sun sets behind it), and is only large enough to fit a handful of guests. With a five-star Diamond Award from the American Academy of Hospitality Sciences and a Michelin Star to its name, it promises more than just breathtaking views, and guarantees a first-class menu and service to accompany the brilliant backdrop of one of the greatest architectural wonders of Imperial Rome. 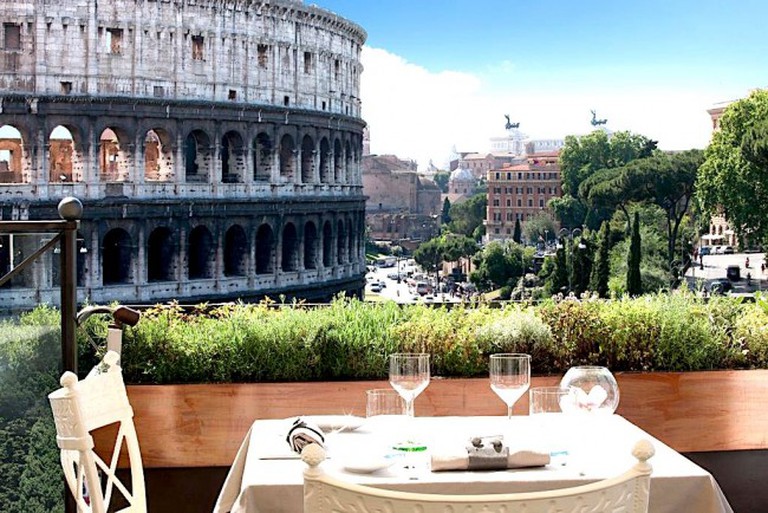 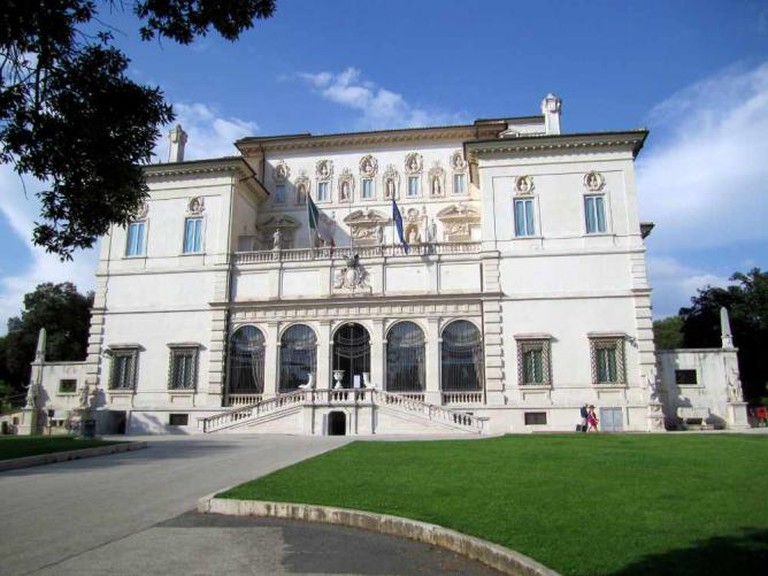 Villa Borghese | © Verbunkos/Flickr
The 7th-floor gourmet terrace belonging to the Hotel Splendide Royal lies at the foothills of the Pincio, one of the seven hills upon which the city was founded. The historic centre stretches out in front of guests, from the Villa Medici just below, to Saint Peter’s Basilica and across the Tiber. The Mirabelle‘s head chef, Stefano Marzetti, has worked at some of Rome’s most prestigious dining institutions, including Antico Arco and the world-famous La Pergola (see below), bringing with him a real passion for meat and fish specialties, and an adventurous selection of pasta and risotto dishes. The risotto with foie gras and liquorice powder is a fine example of his skills.
Open In Google Maps
14 Via di Porta Pinciana, Roma, Lazio, 187, Italy
+390642168838
Visit Website
Give us feedback

La Terrazza dei Papi is a delightful refuge from the chaos of the city centre of Rome. It faces onto the piazza of Santa Maria Maggiore, one of the four papal basilicas in Rome, and while the area is crowded with hordes of tourists all year long, the rooftop of the Mecenate Palace Hotel provides a wonderful vantage point from which to admire the bustling square, with the romanesque bell tower and colossal Corinthian columns towering above. Buffet-style meals are inventively composed by its chefs according to the season and are served throughout the day on the terrace, while the three-course lunch menu is a wonderful alternative, fit for a business meeting and romance alike. 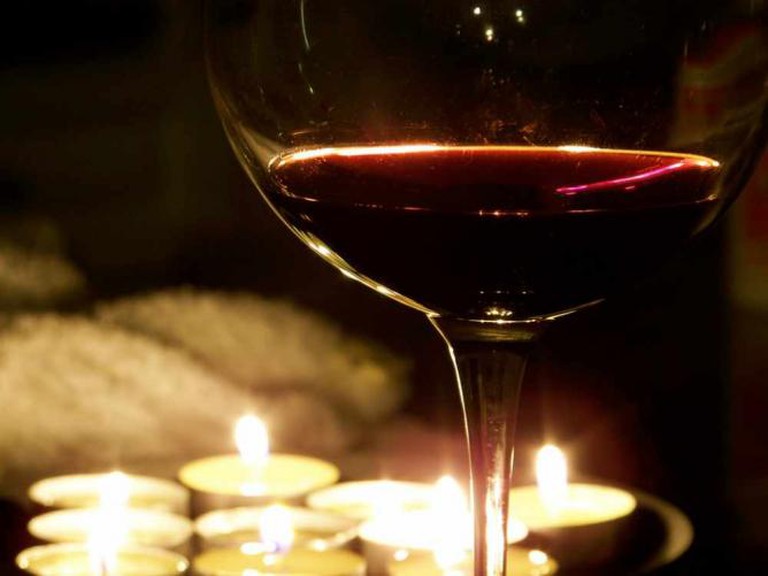 A glass of wine in the candle light | © Brendan DeBrincat/Flickr
Book Now
Rome’s classiest restaurant hardly needs any introduction, but for those who are unfamiliar with it, La Pergola has the honor of being the Italian capital’s only awardee of three Michelin Stars. This is owed largely to Heinz Beck, who has proved his loyalty, having been at its helm as head chef for over 20 years, and who is recognized for his culinary efforts both in Italy and abroad. The nine-course gourmet menu comes in at quite a price, and if you’d like for it to be paired with one of the 60,000 bottles contained within La Pergola’s wine cellar it’ll will cost you extra. It goes without saying that booking well in advance is a must in order to have the privilege of savoring this exquisite treat for the senses, all whilst looking down onto the Roman landscape beneath.
Open In Google Maps
101 Via Alberto Cadlolo, Roma, Lazio, 136, Italy
+390635092152
Visit Website
Give us feedback

In 1956, Oscar Wirth, the owner of the Hassler Hotel, resolved to cover the terrace of the historic palace perched on the top of the Spanish Steps, making it Rome’s very first panoramic restaurant. Initially considered a controversial move, it went on to welcome the likes of John F. Kennedy, Richard Nixon, Audrey Hepburn and Federico Fellini through its doors as regular guests. 60 years after this innovation, the restaurant was entirely renovated and renamed the Imàgo, but without losing its charm in the process. Neapolitan chef Francesco Apreda has continued building on the Imàgo‘s legacy, reworking traditional Italian flavors with a touch of exoticness, having spent time working in both Japan and India.

What looks like a spaceship on top of a tall, concrete structure from the outside (serving as a water reservoir built prior to the 1960 Olympic Games) is in fact one of the capital’s little known, out-of-the-way, luxury panoramic restaurants. Il Fungo (or “the mushroom”, another interpretation of the building’s unorthodox exterior) lies 10 kilometers south of the saturated city centre, in one of Rome’s most modern quarters, the E.U.R., whose construction was initiated by Mussolini in the 30s as a celebration of his regime through monumental architecture. From 52 meters high, diners can take in the stunning view of the city lights at a distance, in a tranquil, modernistic setting. 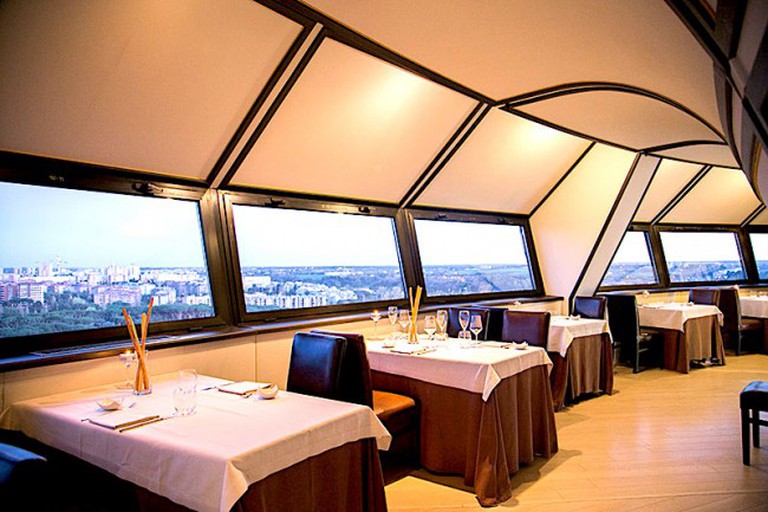 Food at Shinto Sky View | © Courtesy of Shinto Sky View
After a successful debut at its Via Veneto location in 2006, Shinto recently opened another sushi joint, however this time at the First Luxury Art Hotel. Situated between the banks of the Tiber and the boutique-lined Via del Corso, the view from above looks onto the neighbouring rooftops and extends across the rest of the city. The design of the restaurant is easy-on-the-eye, with black-and-white furniture on a dark wooden parquet floor and a lit-up bar in the centre. The magical atmosphere is coupled with a menu featuring impeccably prepared sushi as well as other Asian specialties. The terrace is open to guests from May to October, weather permitting.
Open In Google Maps
39 Via Ludovisi, Roma, Lazio, 187, Italy
+390642827380
Visit Website
Give us feedback 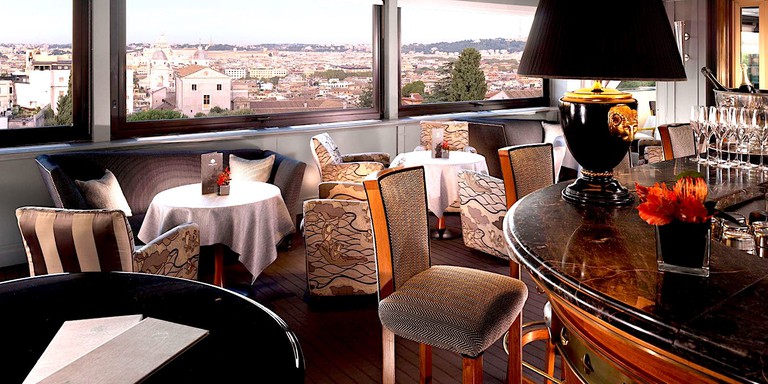 The interior of La Terrazza dell'Eden | © Courtesy of Terrazza dell'Eden
A leisurely stroll north of Piazza Barberini takes visitors to the front of the Hotel Eden where, after being ushered in by a porter and after taking the lift to the top floor, La Terrazza dell’Eden is to be found. Covered from the elements, the restaurant was recognized for its impeccable guest-oriented attitude by the Gambero Rosso guide, receiving the Best Service in a Hotel Restaurant in 2015. Chef Fabio Ciervo’s experience in the kitchen is indisputable after working at some of the world’s finest haute-cuisine dining venues, alongside Michel Roux at the Waterside Inn in Bray, and Martín Berasategui in San Sebastián (both three-starred Michelin restaurants). Fabio uses predominantly local ingredients, often fusing Italian and Mediterranean recipes with an oriental touch. For a special treat, order the specially imported beluga caviar.
Open In Google Maps
49 Via Ludovisi, Roma, Lazio, 187, Italy
+390647812752
Visit Website
Give us feedback

Casina Valadier claims to have the best viewpoint in Rome, and it’s not hard to see why. Occupying the very top of the Pincio hill inside the Villa Borghese, it combines breathtaking views with an enchanting interior. The Casina has a rich history dating back to the early 19th century; after it closed in the 90s it was restored to its original neoclassical look, reopening successfully in 2004. VIP guests such as Princess Diana and Mikhail Gorbachev have previously graced its floors on their visits to the Eternal City. Chef Massimo D’Innocenti, holder of two of the Gambero Rosso magazine’s prestigious “forchette” for his commitment to the fine art of cooking, ensures the Casina’s patrons are served only the most rigorously seasonal offerings from the kitchen. 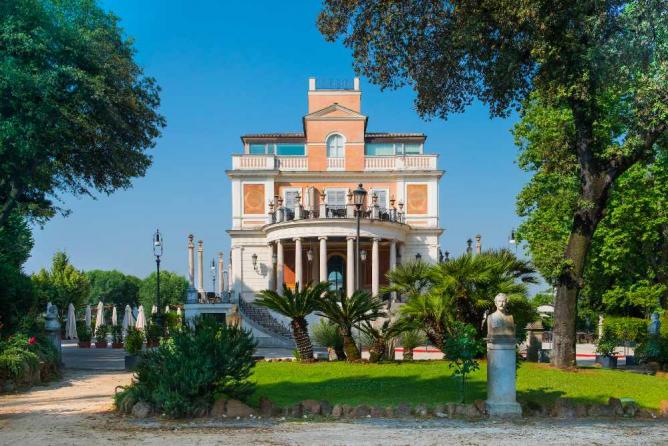 Hotel Forum Roof Garden | © Courtesy of Hotel Forum Roof Garden
The Roman Forum is one of the busiest spots on the city’s tourist route, and getting caught up in the crowds in 40-degree heat in the middle of summer is a far from pleasant experience. From the Roof Garden of the Hotel Forum, you can dine in peace on the large terrace while watching over the gathering place of ancient civilisations below. All year long, guests can look forward to a generous buffet lunch at a reasonable price, and an à-la-carte menu throughout the day which includes an ample selection of vegetarian options as well as fresh fish which is delivered daily. The refined yet relaxed setting above the Forum of Nerva is ideal for all occasions, from business lunches to private functions, and even when the weather isn’t opportune you can enjoy a panorama of the historic centre without feeling the chill.
Open In Google Maps
25-30 Via Tor de' Conti, Roma, Lazio, 184, Italy
+39066792447
Visit Website
Give us feedback
Give us feedback